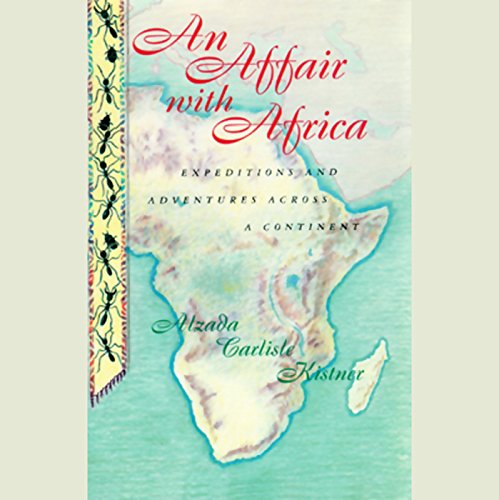 An Affair with Africa

In June 1960, Alzada Kistner and her husband, David, a promising entomologist, left their 18-month-old daughter in the care of relatives and began what was to be a four month scientific expedition in the Belgian Congo. Three weeks after their arrival, the country was gripped by a violent revolution, trapping the Kistners in its midst. Despite having to face numerous life-threatening situations, the Kistners were not to be dissuaded. An emergency airlift by the United States Air Force brought them to safety in Kenya, where they continued their field work.

Thus began three decades of adventures in science. In An Affair with Africa, Alzada Kistner describes her family's African experience; the five expeditions they took beginning with the trip to the Belgian Congo in 1960 and ending in 1972-73 with a nine month excursion across southern Africa. From hunching over columns of ants for hours on end while seven months pregnant to eating dinner next to Idi Amin, Kistner provides a lively and humor-filled account of the human side of scientific discovery.

"The wealth of this narrative is its many fascinating anecdotes in a land where danger is a constant companion." (Publishers Weekly)
"Kistner captivates readers with her anecdotes and descriptions of Africa. The book also provides an excellent account of the politics of the country at the time. Both history buffs and armchair travelers will enjoy this story." (Library Journal)

I really wanted to like this book but it is incredibly self-congratulatory. No excitement, no real sense of adventure - just loads of "I risked my children's life over and over again and I was right to do so".

As a lover of travel writing and a keen naturalist, I was drawn to this book on two levels and I would like to review it along similar lines.

Firstly, it is not a technical science book. The scientific writings are basic, easy to understand and enjoyable. (I spent a good hour or so afterward reading more about mermicaphiles!) Kistner obviously knows her stuff when it comes to ants and their kin, but what I found strange and somewhat annoying, was how every animal in the bush was 'out to get you'. This point of view was not one expressed by a mere tourist, but by one of the most respected biologists in the world. What I found particuarly annoying was when Kistner explained how she had to stand stock still when seeing a Green Mamba, 'the only snake snake in the world that will activly hunt down people' - for someone who obviously knows a great deal about the natural world, it was a ridiculous statement.

That said, the travels the Kistners embark upon are very interesting. They travel through parts of Africa on the brink of, or in the midst of civil unrest and war. Their Congolese experience is particuarly worrying and their close shaves are the main pull of the book for me, despite the fact that I thought I would enjoy it more for its descriptions of wildlife.

3/5 stars for me. It is an interesting read, but don't believe everything you read.