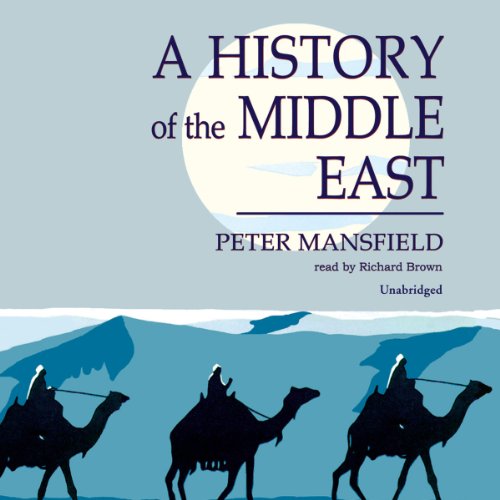 A History of the Middle East

In this masterly work of synthesis, Peter Mansfield, drawing on his experience as a journalist and a historian, explores two centuries of history in the Middle East. He forms a picture of the historical, political, and social history of the meeting point of Occident and Orient, from Bonaparte's marauding invasion of Egypt to the start of the Gulf War. For more than four thousand years, the Middle East has provided a setting for titanic struggles between great civilizations and religions. In this century it became the focus of rivalry between the European powers as the last major Islamic empire of the Ottoman Turks crumbled and collapsed. The discovery of the world's greatest oil reserves gave the region global economic importance as well as a unique strategic value. The foundation of a national state by immigrant Zionist Jews created one of the most insoluble political problems of our era, which is compounded by the reassertion of Islamic consciousness among the great majority of the region's inhabitants. In two penetrating final chapters, Peter Mansfield discusses Saddam Hussein and the prospects for the future.

am i the only one who liked this?

other reviewers seem unimpressed but i thought it was a fine book, covering the whole sweep of the history of the area. it seemed well balanced (at least, moreso than most histories of the area - face it, everyone who writes about the middle east has their axe to grind, but this bloke seemed at least to be trying!) and very informative. well worth the effort!

Good stuff, what's with all the bad reviews?

(I am not finished with the book, I'm still in the 1980's)
The sound quality isn't high but I had no trouble understanding it. I had zero problems with the narrator's accent, he speaks well and clearly. The important part - the information - is great stuff. I know a lot more about the M.E. now than I did before, and that was my goal. It doesn't seem excessively biased to me at all. The western world, and later the Israelis, have been a domineering, bullying force in the M.E. for centuries. No surprise there, right? Mansfield doesn't paint western powers as the bad guys, just as the guys with the big stick. How is that inaccurate?

In Depth, Even Handed Treatment

The narrator's accent took a few minutes to get used to, and the sound quality was merely adequate, but the content was excellent, and for me, quite enlightening. While covering the whole sweep of history, this book focuses on the last 200 years, giving a crystal clear perspective on how the breakup of the Ottoman Empire resulted in the particular nations that constitute the Middle East.
The stories are well told, I was entertained and informed, what more can I ask?

Peter Mansfield's History of the Middle East has become an anglophone classic account of the region, with the emphasis on the long 19th century onwards (most everything prior is covered concisely in the first two chapters). The work has gone through at least 5 editions, updating accordingly; this a lovely recording of the very first, published in 1991. Anyone hoping to learn about the oftentimes confusing modern situation would be advised that this recording ends prior to the swift defeat of Iraqi Forces in the 1991 Gulf War (as it is known to Americans) with profound implications for the contemporary Middle East. Imbued with a little foreknowledge, it is like watching a Western that cuts to credits at the moment the shooters begin unholstering their guns. However, this does not remove the value of the contextual history of the prior centuries, which provides a deeply enriching understanding of today's complicated political, social, and economic situation (the roots of the Syrian War, for example, are very evident even in 1991, admittedly with the benefit of some hindsight). And though Mansfield (who died in 1996) is not supremely prophetic, he does make some predictions that were prescient. The narration is also clear, if not animated (though the one voice modulation, in imitation of Churchill's droning voice, was appreciated if only for its silliness). So it is highly recommended, but with the caveat that it is now almost 30 years dated.

Very detailed; however, if you are not already familiar with the events, you will have a very hard time keeping up and, as already pointed out, it will sound like someone reading their personal family tree in a fast, dry voice.

Dry but worth the effort

This is a solid, straight, history of the Middle East that is well worth reading for a general background on the region. I would recommend it for those of an intellectual bent who are not put off by reading textbooks and the like in exchange for a more scholarly treatment than you'll generally get from the best-seller lists. Would have gotten 5 stars if it were more of a classic and a Great Read like Rise and Fall of the Third Reich.

Good for the earlier history, up until the 1980s, but be aware this book still thinks the Soviet Union exists, the US hasn't sent troops to the first Gulf War, and there's only one president Bush and he's in office.

Great for insomnia . . . and nothing else.

Would you try another book from Peter Mansfield and/or Richard Brown?

What was most disappointing about Peter Mansfield’s story?

Would you be willing to try another one of Richard Brown’s performances?

No. Dear god, no. Nononononono. Where did they find this guy, the basement of the history department at Oxford, falling asleep into his Earl Grey?

I mean, it's a great summary of the history of the region, but the text is about as dry as you can get, and, as I said, this narrator is pretty much every stereotypical boring professor you've seen in a movie and then some. I didn't even know there were still people alive who spoke like this guy.

It took me forever to listen to this book. First, the British accent of the reader made it very difficult to understand many things that were being read. It was the worst voice I have ever heard on the recorded books. Secondly, this was written like a textbook, with numerous dates, places, names, etc. that were just about impossible to follow in recorded form, much less in written form.

I wanted to learn more about Islam, but this book is certainly not a first choice as it is far too complex and difficult to comprehend.

A History of The Middle East

Based on the sample, I fail to detect no problem with the accent what so ever. I look forward to hearing the full book.
If you just want to learn something about Islam, try The Crisis Of Islam by Bernard Lewis. This was excellent.

Uneven and inevitably badly out of date

Anyone that writes a history 'up to the present' knows that their work is likely to start dating quite quickly. If you write on the Middle East then events move on at an even greater pace. There are two things you need to know about this book. One is it really only picks up the story at the start of the 19th century, and gradually goes into more and more detail as we travel through time. The second is the book was clearly written in 1990 as the author mentions the build up of forces following Sadaam Hussein's invasion of Kuwait, but makes no mention of the war that followed. Just think what has happened since then. The Gulf War, the second Gulf War, Israel invading Lebanon, Iranian threats on nuclear weapons, some self determination for Palestine, the Arab Spring and so on. So much has happened in the last 21 years that this book inevitably leaves the story only half told, and the final chapter, pondering what the 1990s might hold, is naturally redundant to say the least.

Given a book this age that criticism is inevitable, but aside from that this is quite an interesting tale which reveals much of the complexity of inter-arab relations as well as the more obvious problems of the region. The reader never puts a foot wrong but his delivery is not particularly inspiring. Also the quality of the recording can vary, with the sound suddenly becoming a fair bit quieter for a while, then louder again, or the quality of the acoustics change. This is a minor point, but a bit off-putting.

If you are considering downloading this book then clearly you have an interest in the subject, and this book will satisfy that interest, if somewhat dryly. Despite its faults it did the job and I do not begruidge the time I spent listening to it.