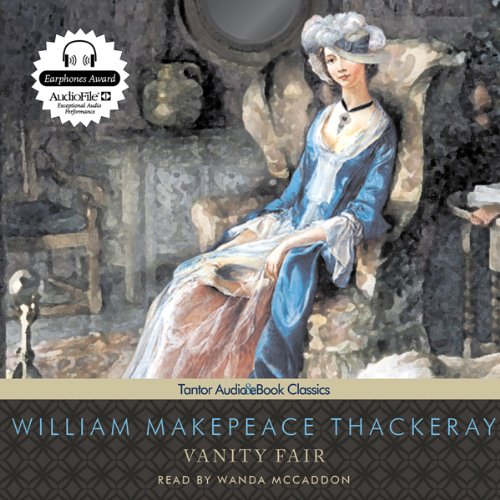 A deliciously satirical attack on a money-mad society, Vanity Fair, which first appeared in 1847, is an immensely moral novel, and an immensely witty one. Vanity Fair features two heroines: the faithful, loyal Amelia Sedley, and the beautiful and scheming social climber Becky Sharp. It also engages a huge cast of wonderful supporting characters as the novel spins from Miss Pinkerton's academy for young ladies to affairs of love and war on the Continent to liaisons in the dazzling ballrooms of London.

William Makepeace Thackeray's forte is the bon mot, and it is amply exercised in a novel filled with memorably wicked lines. Lengthy and leisurely in pace, the novel follows the adventures of Becky and Amelia as their fortunes rise and fall, creating a tale both picaresque and risque. Thackeray mercilessly skewers his society, especially the upper class, poking fun at their shallow values and pointedly jabbing at their hypocritical "morals". His weapons, however, are not fire and brimstone but an unerring eye for the absurd and a genius for observing the foibles of his age. An enduring classic, this great novel is a brilliant study in duplicity and hypocrisy - and a mirror with which to view our own times.

Vanity Fair is the very definition of "bon mots" (witty remarks or clever observations). But who am I to praise Thackeray? Let me stand politely to one side for Charlotte Bronte who, as reported by her biographer Elizabeth Claghorn Gaskel, "was thankful for the opportunity of expressing her high admiration of a writer, whom, as she says, she regarded 'as the social regenerator of his day--as the very master of that working corps who would restore to rectitude the warped state of things. . . .His wit is bright, his humour (sic) attractive, but both bear the same relation to his serious genius, that the mere lambent sheet-lightning, playing under the edge of the summer cloud, does to the electric death-spark hid in its womb.'"

I forgot when Vanity Fair was written but if one changes a few details here and there, it is just as fresh as the latest Drudge Report. This is a satisfying work at every level with treachery and betrayal side by side with love eternal and tender. Thackeray leads a body around by the nose. He takes total control, making one see things his way. He is a master, funny, razor sharp and spot on.

This splendid book was masterfully performed by Wanda McCaddon. I am struck with the consistent presentation for the 28-30 hours it took to complete the recording. It must have taken several weeks. My hat is off to the lady. She must have been absolutely exhausted at the end.

For me, audio books are emotionally draining in a way that the printed word has never been. It is the difference between reading Shakespeare and experiencing a performance of Shakespeare. I am constantly learning things I missed when I only read the work. I think the difference with the audio book version is there are three brains involved: the author, narrator and listener.

Ah, the vanities of life

This is a very, very long book. About 27 hours. Surprisingly, it held my interest for the most part, which is surprising because nothing much happens within view of the listener. The unnamed narrator is our guide through early 19th century London and the Continent, with a dash of India for good measure. The two main characters, Amelia Sedley and Becky Sharp, and there relationships drive the story. We follow assorted family members and hangers on through gluttony, lust, avarice, jealousy, and dishonesty. But we rarely witness the action, we only hear about the aftereffects.

All the characters suffer from serious flaws, except possibly William Dobbin, unless you consider his refusal to let go of an unrequited love and then being stupid enough to marry the woman a positive trait. His sufferance becomes annoying, as I'm sure the author intended. I think the only person who always succeeds is Becky Sharp. She may have had a few bad years, but she proves it isn't true that everyone gets what they deserve in the end. She deserves nothing yet she gets it all.

At first, I thought Thackeray didn't like women. But by the end, I became convince he just didn't like people in general. His writing is outstanding. More than once I laughed at his snide and cynical view of upper class society. Whether he was so disdainful of the poor and down trodden is hard to say. The lower classes featured in the story are generally taken advantage of and financially abused by the main characters.

Wanda McCaddon is wonderful. How she sustained her narration over 27 hours is beyond me.

Wonderful from beginning to end

This is a fine classic novel, narrated superbly. I highly recommend it to all lovers of English literature.

A Wonderful Reading of a Great Novel co

Wanda McCaddon does justice to all the well-drawn characters in Thackeray's finest novel. It is, however, as his most splendid creation that she does her best work: her voices makes vivid the narrator who the reader comes to think of as a dear friend and companion in the course of his journey through a society that is not so different from our own as one might assume.

I loved every minute. Thackeray has incredible insight into human character and wit to match. I could have kept listening for another 20 hours.

Story with no real characters to root for

I love the classics. I've listened to almost 100 books, most of them classics. I know Vanity Fair is considered a classic, and as I've not read anything else by Thackeray, I thought I'd give this a try.

I had to get used to how Thackeray wrote -- it's like he's talking with the reader. His ramblings made the story somewhat longer than it had to be.

This story laughs at the ridiculousness of the upper classes -- their ignorance, their greed, their falseness.

The main characters are Becky Sharp and Amelia Sedley. Neither one is very likable. Becky is a user and out to get whatever she can from whomever she meets. Amelia is a nice but simple-minded girl who never stands up for herself.

Becky gets far by using the upper classes to gain popularity though she has no money and constantly performs theft of services. Amelia gets nowhere by being herself and not seeing the true character of the people around her.

Amelia is loved by Dobbin, who waits years for her to return his affections. She is too in love with the memory of her dead husband to see the man her husband truly was, or to see the man she could have in Dobbin.

Overall, the story was often frustrating, perhaps because while it reflects the character of people from the 1850's, it also reflects the people of today. How many financial scandals have there been lately? And aren't people famous today simply as a circumstance, and not for any true value they give to society?

The narrator was excellent, each character had its own voice. The story was good in that you learned a lot about history (Waterloo and that time period), The characters were interesting and frustrating.

It was funny, but way too long. Too much parody, however I did like the characters.

The narration was too rapid, the diction unclear, and the otherwise compelling story told without passion or conviction.

What made the experience of listening to Vanity Fair the most enjoyable?

Mostly poking fun at everything. Loved the story telling, the characters, and the satirical view on life.

loved the book and narration. it was a very good listen and I was sad to finish it!