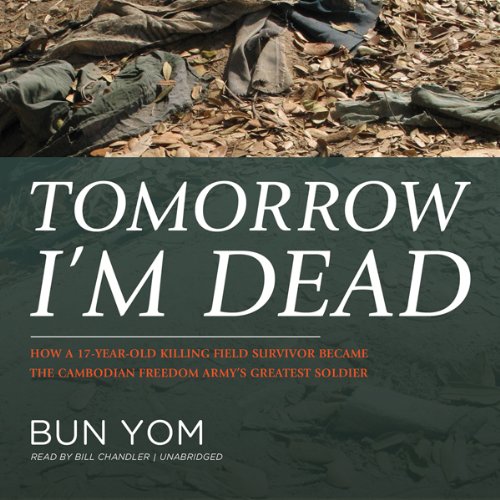 This is Bun Yom’s story of his capture by the Khmer Rouge at fourteen-years-old - and the unmatched suffering, courage, and heroism that ensued.

After three years as a killing-field slave, seventeen-year-old Bun Yom escaped from the Khmer Rouge and became a freedom fighter. Using his wisdom, courage, and infinite compassion, Bun rescued thousands of Cambodian people and soon became the Cambodian Freedom Fighters’ greatest soldier. Tomorrow I’m Dead is the only known first-person account of the freedom fighter’s heroic liberation of slaves from the Khmer Rouge killing fields.

This production concludes with an exclusive interview with the author, which includes untold stories such as Bun’s use of crocodiles to escape enemy gunfire. Also included is an epilogue in the author’s own voice offering a message of encouragement and hope.

Bun Yom arrived in the United States with not one penny, with only the clothes he was wearing, and without knowing a single word of English. Through hard work, he now has his own home, a family, a restaurant, and many friends. It took twenty years before he was ready to write about his years in the killing fields, but for the sake of kids everywhere, he has finally done it.

This audible book requires patience and some ability to look beyond the flaws of its delivery. The writing and narration are not polished or "professional" in any sense. But this is such a compelling true story of the horrific Cambodian war that must be told. If you can get past the first part of the book and stay with the story line-- you will be educated and rewarded for your patience as you learn of an amazing survivor, a true hero and his incredible life.

An amazing real-life insight into one of the most horrific recent world events told through the eyes of a clearly smart and resourceful kid. An amazing story which I am sure I will listen to again and again

Very impressed with this biography!

What amazing things this man endured and the integrity he kept. Truly inspiring. A good read.

The story as a whole is ok but I feel like he is reading a diary. A lot said didn’t move the story further.

could not wait to continue listening. having visited the Killing fields in Cambodia, and traveled in many of the areas discussed, it is obvious that what he experienced was true. it's shocking and appalling the khmer rouge and ISIS (same same but different) is even allowed to exist after what we witnessed as a people in WWII.

Good but probably not 100% accurate

The story was good and the narrator did a good job. I suspect there were some problems with it being translated to English.

The narrator didn't seem to put much feeling into the story...and the story itself seems to lack detail.