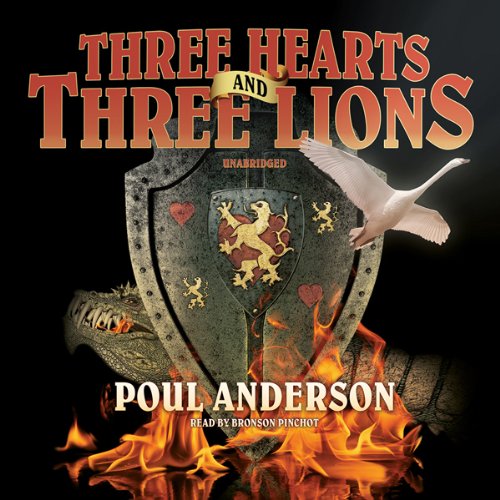 The gathering forces of the Dark Powers threaten the world of man. The legions of Faery, aided by trolls, demons, and the Wild Hunt itself, are poised to overthrow the Realms of Light. Holger Carlsen, a bemused and puzzled twentieth-century man mysteriously snatched out of time, finds himself the key figure in the conflict. Arrayed against him are the dragons, giants, and elfin warriors of the armies of Chaos and the beautiful sorceress Morgan le Fay. On his side are a vague prophecy, a quarrelsome dwarf, and a beautiful woman who can turn herself into a swan, not to mention Papillon, the magnificent battle horse, and a full set of perfectly fitting armor, both of which were waiting for him when he entered the magical realm. The shield bears three hearts and three lions—the only clue to Holger Carlsen’s true identity. Could Carlsen really be a legendary hero, the only man who can save the world?

This was a favorite book of mine many (MANY) years ago, and I was interested in remembering why I liked it so much. It's a great story, a stand-out among many of the same genre from the same time.

I like the slowly revealing details of the quest as the hero recovers memories. I like that there are many different encounters with many different challenges instead of one huge mega-battle. I like the humor. I like the scientific-nerd-in-a-magical-environment. His empirical understanding of things that look magical are clever. (See, for example, his analysis of the source of the curse on the Giant's gold. See what I mean? Clever.)

That said, I have to say that Bronson Pinchot is completely phenomenal. I've listened to several of his audiobooks, and he just flabbergasts me with the range of his characterizations. In this book, the hero's slight Danish inflection is done perfectly. The other accents and voices are distinctive and each evokes a particular sense of that character. Honestly, I could listen to this storyteller all day!

This is a classic from the Golden Age of Fantasy, and the narrator is golden. Really, don't miss this one!

This book has been one of my favorites since I was a teenager and has been a constant re-read over the years. I've always liked the story line and the fast-paced action. When I first saw this book, I was hesitant to buy because of the reader. I was unsure of Mr. Pinchot's ability and I know how bad readers can really destroy a good book. All I can say after listening is: Oh My Goodness! I have moved Mr. Pinchot into my top readers group. The only one ahead of him is Jim Dale, and it's a close race. His characterizations are spot on, and greatly enhance the story line. This book, read as it is, makes fabulous entertainment. This will be in my short list of re-listens. If you're new to Poul Anderson definitely listen to a great author. If you're new to Mr. Pinchot as a reader, definitely listen to this.

Published in 1961 and based on a novella from 1953, Poul Anderson's Three Hearts and Three Lions is an entertaining picaresque novel in which Holger Carlsen, a Danish football-playing engineer gets knocked out during a skirmish with German soldiers during WWII and regains consciousness in an alternate world based on medieval French legends, in which the forces of Chaos (represented by Faerie and its evil supernatural and human allies) are gearing up for a big offensive in their eternal war against the forces of Law (represented by the Empire and its Christian paladin heroes and other good allies). Who does the formidable warhorse and nifty armor in its packs really belong to? Is he a heroic paladin or a Danish engineer?! Can he find a way to return to his own world and time? Should he follow the advice of a creepy crone? Will he be able to resist the innocent affection of the nubile swan-maiden Alianora? What will happen if he were to meet up with the debonair Saracen knight who's looking for him? Should he become involved in the coming war between Chaos and Law? How can he defeat monsters like trolls, giants, and dragons, let alone irresistibly sexy femme fatales like Morgan le Fay?

Bronson Pinchot has a grand time reading it all, enthusiastically doing the American narrator, the Danish protagonist Holger, the heavily Scottish dwarf Hugi, the lightly Scottish swan-girl Alianora, the ominously soft-voiced Morgan le Fay, the comically and scarily deep-voiced Giant, and so on.

It's not a great book, but it is often funny, sometimes scary, and never dull. It is interesting to read it as a precursor of later books featuring people from our world who get caught up in conflicts in alternate fantasy worlds like the Eternal Champion stories of Michael Moorcock or the Chronicles of Thomas Covenant by Stephen R. Donaldson. Anderson's novel is refreshingly concise and single-volumed, too.

Accents were ok, could barely understand one character in particular. Story was ok kinda hard to follow. Ending was very anticlimactic. Would not recommend

Good story but the narrator....Ugh.

Do not want this horrible narrator's voice ruining the story for me. I'll buy the book and read it. Seems a decent story if you can get past the awful narration. Could only get so far and had to stop.

Holger Carlsen is fighting Nazis as part of the Danish resistance when he is shot and thrown into a parallel dimension. There, he is a knight, "The Defender," who was promised to turn up when the forces of Chaos threatened to overwhelm the lands of Law. Joining him in his quest is Alianora, a swan maiden, and Hugi, a dwarf. Opposed to him are Duke Alfrec of Faerie and Morgan le Fay.

3H3L was written in 1961 (based on a 1953 novella). It is a kind of Sword & Sorcery version of A Connecticut Yankee in King Arthur's Court. I return to this book every five years or so. For one thing, it's TIGHT. All the action happens in under 200 pages and it still has well-drawn characters, plenty of twists, and cool action sequences. In fact, it is really shocking how much content Poul packed into this novel without making it feel too forced.

I call it "the most D&D book written before D&D." (Dungeons & Dragons for you non-nerds.) Not only can you see a lot of the influences on D&D (some listed below), but it just reads like an overland adventure in some ways. There is puzzle-solving, murder mysteries, straight up bad guy fights won with both sword and brains, and a quest to tie all the episodic chapters together.

Some other things you'll see in 3H3L:

A Paladin: living by a code, associated with a holy sword, riding a cool mount, practicing the laying on of hands (?), and enjoying protection from Evil.

A Troll: one that regenerates but is weak to fire. (This has to be the best fight-with-a-troll scene in all of fantasy literature and it is CLEARLY the prototype for D&D trolls. The description is an exact match for the weird old-school D&D troll with its well-like eyes. Man this is a creepy fight!)

A Dwarf: complete with a Scottish accent who loves strong drink, ribald stories, and gold.

Shapechangers: both the kind with cursed blood (werewolf) and those who use a magical garment (swanmay).

Fancy Elves: living in stylish fashion and with a different measure of time than humans. (Also allergic to cold iron.)

Witches and Wizards: hedge witches that summon demons all the way up to Morgan le Fay herself.

Alignments. Chaos vs. Law. (3H3L was the source for the alignment system in D&D, which was originally just Chaos, Neutral, and Law.)

I'm not saying this is the best book you'll ever read. It has a bit of a juvenile flair to it, and the final chapter is a bit of a rush job, but it's a fun romp and a real eye opener to where Gygax and Arneson drew some of their inspiration. Much of it will feel like "old hat." But that's only because it has been copied so much. It is the prototype, not a clone.﻿

I FEEL ALL AT SEA

A WOMAN IS ONLY A WOMAN, BUT A CIGAR IS A GOOD SMOKE
I read the hardback years ago and loved it. With all the heavy accents, you have to concentrate with this one. For the first hour I was enjoying the unusual language. By the end of the day, my mind was wondering. I tried multiple times to concentrate, but the narrator's style when not doing voices was putting me to sleep. I tried to CLING TO MY PATIENCE WITH BOTH HANDS, but it did not work. Listen to the sample to see if the narrator can keep you awake. I thought this take on knights, swan women, elves, dwarves, manticores, unicorns, griffins, Morgan Fey and others was unique.

A BODY WITH MORE CURVES THAN A SCENIC HIGHWAY

This is a good book

I read this book as a teenager and I was afraid that it wouldn't be as good as I remembered it, but it was. It was very well read and I'm glad to have it among my audible collection now.

Immediately engaging, throughout this story I was thinking this would be a great seed for a whole series of books. It's hard to blend fantasy and sci-fi in a way that doesn't detract from either, but I feel like Poul struck just the right balance here. Add to that the fantastic narration, switching seamlessly through a host of accents and speech styles, and I was fully immersed start to finish. Bravo!

excellent story, but the ending was too abrupt

I really enjoyed the story, had a hard time understanding some of the accents used, but overall it was good, just too abrupt of an ending

This is a story for D&D fans. It was a major influence on the alignment system and on certain monsters, notably trolls. It is also the source of the Paladin character class.

Apart from that, the story itself isn't very sophisticated, and smacks of the casual sexism that permeated its era.

Bronson Pinchot's reading is, however, masterful and goes a long way towards making this audio book enjoyable.

Classic fantasy at its finest

I first read this story at the age of 18 back in 1973, the chivalry and high romance touched my heart and has stayed with me all these years. I was delighted to find it on Audible but half frightened that the story's magic would have faded. I need not have been concerned, the magic remains untarnished and is brilliantly brought to life by Bronson Pinchot's masterful narration.

I was distracted by the accents. From broad Scottish, generic Scandinavian to broad olde Worlde unknown with the occasional hint of Geordie and a hint of Welsh it was very hard to follow.

Excellent reading of this wonderful story. Great piece of escapisme, thoroughly recomend. listening to this book read for me made it come to life.

Love the story but the Scottish accent is horrendous. Its Very hard to understand and I've spent time in Glasgow.