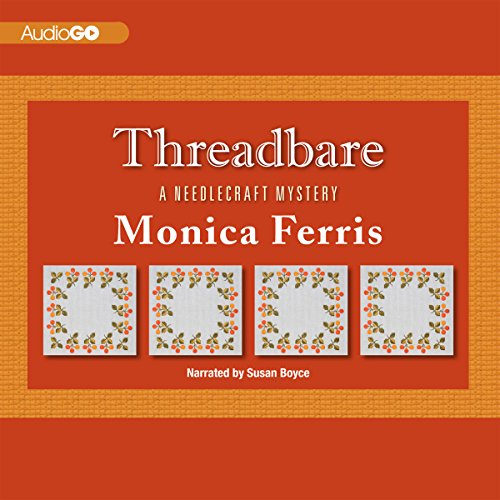 When an elderly homeless woman is found dead on the shore of Lake Minnetonka, she's wearing something that holds the key to her identity but also opens up a mystery. Embroidered on her blouse is her will, in which she bequeaths everything she owns to her niece: Emily Hame, a member of the Monday Bunch at Betsy Devonshire's Crewel World needlework shop! Emily's aunt turns out to be the second homeless woman to be found dead under mysterious circumstances. It's up to Betsy to discover the common thread between the deaths - and to determine if a murderer may strike again.

One of the better entries in the series

If you could sum up Threadbare in three words, what would they be?

With Threadbare, Monica Ferris has gotten back into the swing with the Needlecraft Mystery series. A plot that you couldn't figure out immediately, more new characters, but retaining enough of the basic charm of the series to make it well worth reading/listening to.

One of Monica Ferris’s best books yet. Found it difficult to stop listening until I had finished the entire story. As a native Minnesotan, there were a few towns pronounced incorrectly, which is why I only rated the performance at four stars, and not everyone in Minnesota has a wonky accent, as the reader imagines. Overall, this was a very enjoyable listen.

ENJOYED THE STORY, BUT NOT THE NARRATION

When I'm in the mood for an "easy listening" book I often choose Monica Ferris. The stories are entertaining and the characters are likeable. I also enjoy the setting. Excelsior is a real place I have visited many times. I've had lunch at Antiquity Rose - it really does exist and the food is very good. If you've enjoyed other Monica Ferris books, you'll probably enjoy this one.

Narrator Susan Boyce has a pleasing voice, good diction, and did an acceptable job with character voices. However her pauses and emphasis on words seemed "off" to me. Many times it sounded to me like she was reading the text for the first time. I would definately listen closely to the audio sample of any other book she narrated before I purchased it.

The only needlework I've ever done was a few crewel embroidery projects many years ago. I enjoyed it, but it did not become hobby for me. The book includes discussions of needlework, but I don't find them overly long or tedious.

This is a relaxing "cozy" mystery. I believe I might have enjoyed it more with a different narrator.

Monica Ferris is one of my favorite authors

I always happy to have a new release from Monica Ferris - her charactors are very real.

OK for mind candy and you are a fiber person

I enjoyed the light hearted story. It was a no brainer just to listen to it. It is very specific target audience: fiber artists. The story line was light on substance and a little moralistic but overall I enjoy her writing.

I will read the Tipping Point

Did Threadbare inspire you to do anything?

My grandmother worked hardanger so it was interesting to hear how difficult it is to do. I would like to explore it.

I thoroughly enjoyed this installment

I thoroughly enjoyed this installment, especially the ending. I highly recommend this audiobook/book to fans of cozy mysteries, but suggest starting with the first installment.

More of the same

Still enjoyable and light. If you have enjoyed others in the series then you will enjoy this.

The mystery was pretty solid, Betsy did her usual thing of investigating. The characters are well written and established. The usual characters are there plus a couple of new ones.

This book was a bit of a departure from the usual quaint and affluent town of Excelsior. Betsy investigates the death of two homeless women. In order to do so she takes a homeless women on to help investigate. In doing so, Monica Ferris highlighted the plight of the homeless. I was a bit disappointed that Betsy didn't offer the homeless woman at least part time employment. If you are going to highlight a problem as big as homelessness, you might as well become part of the solution. Also, I find it unbelievable that Betsy is so cozy with her adversary Mike Malloy. He appears lazy in this novel as Betsy does all of the work and reports to him. It's an ok book. It passed the time. I'll probably read the next one when I'm between books and have nothing else to read.