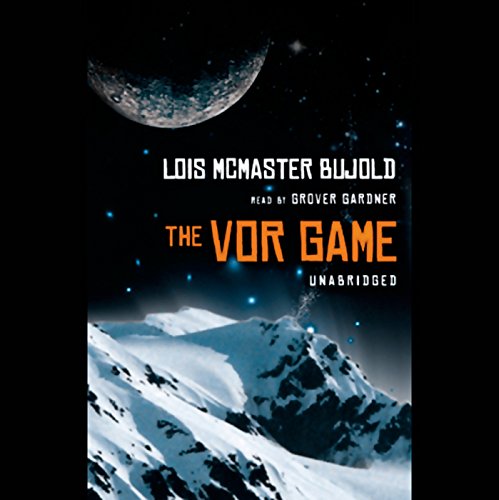 Miles Vorkosigan graduates from the Barrayaran Military Academy with high expectations of ship command, but is disappointed with an assignment as meteorologist to Lazkowski Base, an arctic training camp. His tenure in the windy, snow-covered north is cut short when Miles narrowly averts a massacre between the trigger-happy base commander and mutinous recruits. After a brief stay under 'house arrest', Miles is re-assigned to investigate a suspicious military build-up near a wormhole nexus. Reviving his undercover persona as mercenary Admiral Miles Naismith, his routine information-gathering duty expands to a rescue mission when the Emperor of Barrayar disappears during a political conference on a nearby space station. Miles must use his considerable negotiating skills to avoid a showdown between competing powers for control of the wormhole, find the Emperor, and watch his back for the arctic base commander seeking bloody vengeance.
©1990 Lois McMaster Bujold (P)2005 Blackstone Audiobooks

This was the first book I have listened to by this author and I was pleasently surprised. I knew she was an award winning author but was a little afraid to read any of her stuff thinking it is more in the fantasy genre. I do love a good space opera and this was a excellent one I loved the characters and the wit that the lead character has. I also like the reader who I have listened to on other books he brings just the right cadence to his read. I highly recommend this book and hope more of this seris is put out for us to listen to.

Finally some of her Miles series is making it onto audio books. I read this entire series and I loved it. The Vor Game is a great example of the series and is a great moving book about honour and commitments. I recomend any of her books in this series, I have never been disappointed by any of them. Her characters fly from the pages, real and complete, pulling you along through the story as you want to see if Miles manages to succeed, or not. You never quite know for sure what the outcome will be, since he doesn't always get everything he hoped for.

Lois McMaster Bujold is a great author and this book, like all those in the Vorkosigan series, is packed with wonderful characterizations and snappy writing - very readable/listenable and lots of fun. However, this book is several books into the series, so if you are not familiar with the character and backgrounds you might have tough time figuring out how you got here. Unfortunately this is currently the only Vorkosigan book Audible carries, so I suggest you hit the library or bookstore and pick up the first books in the series before listening. Start with 'Cordelia's Honor' and then 'Young Miles' and you'll be up to speed (and hooked!).

Finally an action science fiction book that uses a realistic and fallible hero. I love the dry humour, and the fact that I have to think rather than just listen. A totally engaging storyline, supported by 3 dimensional characters and enough edge of the seat action to keep an old soldier interested. Lets hope you get the rest of the series on Audible in the near future, as this one has really whetted my appetitie. PS. Very happy with your product and service. You guys rock.

This is not the first time I've been priviledged to listen to one of Bujold's wonderful Miles Vorkosigan books on a long car trip; Bujold has always been my author of choice for my wife to read aloud to me while I drive.

With Gardner narrating, I was delighted to listen once again to the wry wit and snappy pacing in "The Vor Game". It's more lighthearted and adventurous than Bujold's fantasy novels, yet it continues to display the rich characterization one can reliably expect from this outstanding author.

Bujold is a multifacited writer and gets 'it' right. As another reviewer pointed out, 'The Vor Game' is fourth or fifth in the series and is preceeded by 'The Warrior's Apprentice' which is now available from audble. Listen to that first and then come back to this one. In 'The Vor Game', Miles is in his early twenties and is more mature and less frenetic. He's coming to understand that actions have consequences and some of his snap decisions in the earlier book come back to haunt him - just like in real life for the rest of us. I agree that there is some confuson when Miles shifts between personas. The personas are developed in the earlier book and mature in this one. In this book Bujold matures her concept of personal and individual honor which extends into the rest of her work.

I really liked this book. Unlike many books, this is tightly plotted so even though it is a space action book it does not have any glaring holes in it. The other thing I liked about it was that it was character driven and not driven by endless action sequences. The mental gymnastics keep my attention throughout.

I'd like to see more of these books as it is apparently part of a much longer series.

I'm having a great time with the Miles Vorkosigan books...I must be, I'm gonna end up spending my yearly audio budget on 'em. Plots are pretty involved but not tough to follow, she sprinkles humor all through them, characters likable & believable. The narrator is excellent; pleasant voice, good pacing, just understated enough that he doesn't detract from the book, animated enough that he helps it come alive. I am a forever Grover Gardner fan.

Simple and light, but fun

This is a light read, nothing too complicated but it's a lot of fun. The character is interesting but rather generic, except for a physical deformity which doesn't affect the story much, though it did shape his character. The buildup to the ending was well done. The conclusion was grand.

Two things that bothered me... first, it was a sequel and I think I would have enjoyed it more if I had read the previous book. The events in this book didn't require the sequel but there were characters and relationships already established. Unfortunately I couldn't get the prequel on audio. Second, apparently our hero was a grand savior in the prequel, but he doesn't get much respect for it in this book. Either I'm missing something explained in that book, or the author broke logic a little to make this book work.

Anyhow, I enjoyed the story and there were several scenes that had me chuckling out loud. I'll be looking for other books in this series to make it to Audible.

An Entertaining but Light Sequel

Lois McMaster Bujold's Vorkosigan Saga is a set of space opera novels and stories featuring various interstellar human civilizations intertwined in political rivalries and alliances oriented around controlling the wormhole nexus points vital to space travel, expansion, and trade. The main protagonist, Miles Vorkosigan, is, to superficial people, a figure of contempt or envy because he looks like a mutant dwarf and because he is the scion of a powerful aristocratic family. Miles' curiosity and spunk often land him in impossible situations from which he must employ all his wits, guts, luck, and "forward momentum" to extract himself.

In The Vor Game (1990), the sequel to The Warrior's Apprentice (1986), Miles graduates from the Barayaran Academy for officers and receives an outrageously inappropriate post as the infantry meteorologist of "Camp Permafrost." He has been given the position as an opportunity to finally learn to obey his commanding officers. Soon enough, Miles finds himself caught up in a mutiny, which launches him on another course of improvisational forward momentum, this time involving a sadistic and vengeful commanding officer, an amoral and sexy leader of a space mercenary company, his own former Dendarii mercenary company, a depressive and AWOL emperor, and a sneaky and dangerous grab for a crucial wormhole nexus.

While The Warrior's Apprentice is an entertaining and surprisingly dark and moving novel, The Vor Game is less humorous, substantial, sad, and fresh. In the sequel Miles' crises seem less crazy and his improvised solutions less interesting. Even allowing for the Barayaran Emperor Gregor, the supporting characters are less compelling, too, none of them achieving the interest of Miles' bodyguard Bothari and his daughter Elena in The Warrior's Apprentice.

Nevertheless, given Grover Gardner's usual effortless and appealing reading (he IS Miles), The Vor Game was witty and entertaining and is a cut above run of the mill space opera (though it is nowhere near as sublime as anything by Iain Banks or Alistair Reynolds). I really do like Miles and will surely listen to more books in the saga to see how he develops as he ages, and because I like Bujold's fantasy novels like The Curse of Chalion and Paladin of Souls so much, I have faith that her later novels about Miles will turn out to be stronger than this early sequel.

A very good audiobook of a great Bujold novel

If you are already familiar with the novel, then you will find an enjoyable audiobook version. It is well read by a single reader, with good expression. I thoroughly enjoyed hearing my favorite passages, although at points I did wish for more differentiation between the characters. If you are unfamiliar with Bujold's work, the Vorkosigan series is a glorious space opera with great characterization and it is quite funny, poignant and very well written. This is the second Miles Vorkosigan novel so if you are new to the series you may want to pick up 'the Warrior's Apprentice' first, which details the earlier events.

Another wonderful reading of another wonderful novel. I really like Grove Gardner's readings of the Vorkosigan novels - he gets the humour without reading them as obviously 'funny'. And Miles is such a superb character who develops so well over the series. One to savour.

Great combination of story and performance

Bujold delivers another great tale and Gardner brings it to life. One of my favourite series and narrators.

If you already know the Vorkosigan saga then you don't need this review. If you're new, you should get The Warrior's Apprentice first as it will fill in some backstory. Not imperative, but helpful.

If you, like many others have come to love the scrappy and highly intelligent Miles Vorkosigan, this installment won't disappoint. Action, calamity and disaster narrowly escaped abounds.

I tend to like Grover Gardner's readings of the Vorkosigan series, by there is one negative I noticed. His pronunciation of characters' names, places and other non-Real-Life words changes from novel to novel in this series. Not the worst thing, but it did make me prick up my ears every time. At least he is consistent within one novel.