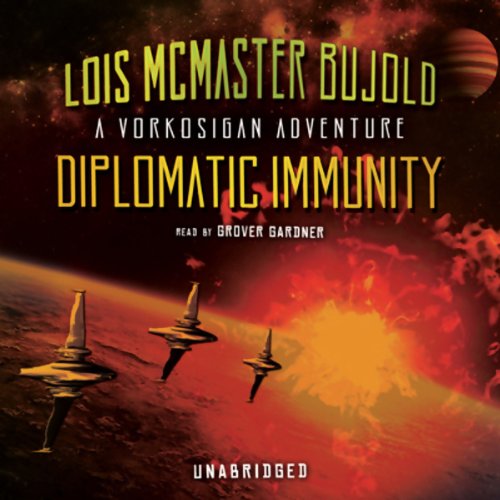 A rich Komarran merchant fleet has been impounded at Graf Station in distant Quaddiespace after a bloody incident involving the convoy's Barrayaran military escort. Lord Miles Vorkosigan and his wife, Lady Ekaterin, have other things on their minds, such as getting home in time to attend the long-awaited births of their first children. But when duty calls in the voice of Barrayar's Emperor Gregor, Miles, as imperial auditor, has no choice but to answer.

Waiting on Graf Station are diplomatic snarls, tangled loyalties, old friends, new enemies, racial tensions, lies and deceptions, mysterious disappearances, and a race with time for life against death in horrifying new forms. The downside of being a high-level troubleshooter comes when trouble starts shooting back.

I have been follow the saga for a couple of years now - i have not actually read any of these books so cannot comment on the faithfulness of this audiobook, BUT I do have every audiobook of this series now and do eagerly anticipating each new release.

With this I am glad to say this is another smash hit - I so do feel for Miles' character and love the twists and turns as each mystery has to be solved. Again, there is the development of existing and new characters (in the form of Quaddies).

The narrator is Grover Gardner and this is the icing on the cake - would have to admit I am partial to Scott Brick and Stefan Rudnicki - and have actually picked books up with the narrator being a major fact as they carry you through the tale, adding emotion and a charm to each character.


By the way, if you did not know, the series order is:
"The Warrior's Apprentice"
"The Vor game"
"Borders of Infinity"
"Cetaganda"
"Brothers in Arms"
"Mirror Dance"
"Memory"
"Komarr"
"A Civil Campaign"
"Diplomatic Immunity"

No longer without a net

I love LMB's characters, not only in the Miles series but in her other work. They are deeply believable and engaging, and they develop in ways which connect us very strongly with their humanity.

That said, I have to admit that the Imperial Auditor Miles pleases me less than the breakneck, impossible odds fellow we all first came to love. Miles has so much more going for him now, that it is hard to imagine him falling. He is still improvising at the point of contact in imaginative and entertaining ways, but he is no longer flying without a net, and I do somewhat miss that quality in the series.

Nonetheless, this is wonderful writing and I can't wait for my next Vorkosigan download.

The honeymoon is over

In Diplomatic Immunity, Miles and Ekaterin are on the final leg of their interplanetary honeymoon and are anxious to return to Barrayar where their two full-term babies (one boy and one girl) are ready to be released from their uterine replicators. But, as usual, something happens to delay their return. In this case, it’s a diplomatic issue — a Komarran merchant ship with a Barrayaran military escort is being held up at Graf Station in Quaddiespace — and Emperor Gregor asks Miles to go straighten it out on his way home. When Miles gets there, he discovers that a Barrayan officer is missing and possibly murdered. His investigation eventually uncovers a conspiracy which could lead to bioterrorism and war.

Some of our favorite characters are missing from Diplomatic Immunity, but fans will be happy to get reacquainted with the gene-manipulating bubble-dwelling haut ladies of Cetaganda; Bel Thorne, the Betan hermaphrodite who Miles had to ask to resign from the Dendarii Mercenary Fleet at the end of Mirror Dance; and Nicol, the Quaddie musician we met in the short story “Labyrinth.” We learn a lot about the Quaddie culture in this novel.

Roic, the big buff armsman is also a main character here and we see him rapidly and gratefully developing into Miles’ right-hand man, a situation that he would never have foreseen after that embarrassing buttered underwear scene in A Civil Campaign. We also once again see Ekaterin as a cooly level-headed woman — something that Miles appreciates immensely. She is important to the resolution of the story in Diplomatic Immunity but, unfortunately, Bujold doesn’t show us some of those important scenes.

Compared to the earlier VORKOSIGAN books, Diplomatic Immunity, a mystery, is darker and more serious. The plot is slower and it lacks the situational comedy elements we’ve seen in previous books. I should think this is a good change since I complained (just a little) in my review of A Civil Campaign that Miles wasn’t acting his age. On the other hand, the comedy is a part of what makes these novels so entertaining and I missed it in Diplomatic Immunity.

This is a solid but not stunning VORKOSIGAN novel. Grover Gardner continues to excel with his narration of the audiobooks. I highly recommend this series in audio format.

Miles has grown up (sort of)

Would you listen to Diplomatic Immunity again? Why?

I will listen to this book over and over. It has such a great sense of humor and is a great continuing the Vorkosigan character with another non-stop adventure. Miles has grown up(sort of) The very idea of Miles as a father is presented with a light touch and without in any way changing the crazy, frantic pace, or general amusement the character has provided in the series.

Miles is a person who, although he has strong family connection and wealth, has many problems to overcome. He does so in many ways that are amusing and touch the heart of the reader. The author always seems to be able to expose the heart of her character in ways that matter and connect with the reader.

My favorite scene is where Miles figures out what is going on and then realizes that he won't be able to be the one to make it right. He has to depend on others to finish what he starts. He deals with his fears in a very well written manner.

This book could have been longer. At the end, I wanted more.

Very tedious read. No action. Inane conversations. Too many undeveloped characters in the begining of book. Probably did not listen to more that the first 1/4 of the book when I gave up on it. Feel like I wasted my money and I can't sell the book or give it away.

Miles Vorkosigan is a terrific character, and Ms. Bujold has kept his stories well-plotted and entertaining from 'Shards of Honor' right through 'Diplomatic Immunity'. Grover Gardner does a very good job of reading the tales.

I am so pleased that all the Miles Vorkosigan books are finally in audio format. Listening makes the stories fresh and new, and Gardner has captured Miles' quirky personality in the voice Miles has been given.

Miles is a wonderful character full of vigor and vitality. In this book we are brought back in touch with Miles and his wife. He is once again set to save Barryar against a harsh galactic civilization. I am thrilled to see Miles work through a new mystery and see the romantic interactions he finds with his new wife. It is a wonderful turnabout to see the young Miles, become a man, a husband, and finally a father-to-be.

This author blows my mind.

I've listened to almost every audiobook by Lois twice. I can't imagine her not becoming a classic author. She is one of the best authors I've ever read across 40 years. This story is no different. Just when I think she can't surprise me with another lovely plot with Miles' crazy journey, she does.

I have read (or listened to) the entire Vorkosigan series (so far), and I have yet to find one that I did not just love. The plot, pace and characters are outstanding, and I can't wait to see the next in the line. This book is just as good as the rest...I just wish there were more I could listen to/read!

Lois McMaster Bujold once commented that her plots start with: What's the worst thing I could do to this character? Having to interrupt a delayed honeymoon to deal with a minor diplomatic problem doesn't seem too bad at first, especially as it allows Miles to meet old friends and introduce them to Ekaterin. As an Imperial Auditor, Miles' first job is to listen, but the stories he hears don't quite add up. Did the missing security officer really desert the fleet? Where did that blood come from? Who is the man with the webbed feet? Just what is that Betan transporting? As Miles' simple assignment to free a Komarran trade fleet and its Barrayaran escort from detainment in Quaddiespace becomes more complicated, his honeymoon detour reveals a plot that threatens the Barrayaran Empire and Miles' hopes for a long and happy marriage.

sad to leave the 'vorkosiverse'

I've read each of the books in the series at least twice and have been treating myself every few months to listening to another audible book in the series.
It's hard to pin down why I like them so much. The plots are fun, Miles is irresistible and the secondary characters are interesting.
I long to know more of what happens next. How does Miles cope with twins? How does Ekaterin cope with Miles? I would love to hear more from Cordelia's or Ivan's perspectives.
That must be the mark of a good author; that she leaves you begging for more, but writes complex enough books that you can re-read what she has already produced and draw some more enjoyment from them.
For first-time readers I would say that although each book is stand alone I wouldn't recommend starting with this. You really would enjoy this better with the back story of the other books. Ideally go right back to the beginning and Shards of Honor.

Wonderful rendition of a cracking thriller

Having read the print version longer ago than I care to recall, I thought there wouldn't be any surprises. But not only had I forgotten many of the plot twists - I had also forgotten the sheer quality of the writing. What a solid treat!