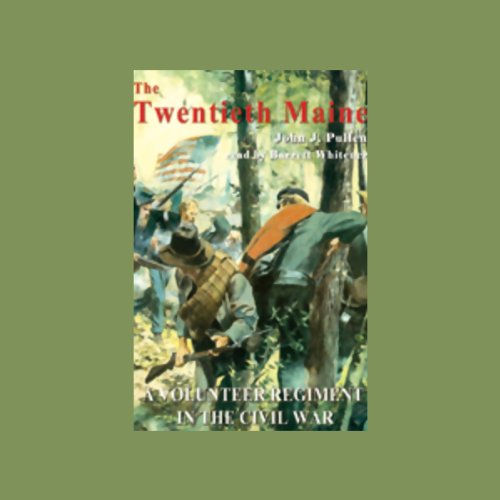 From rockbound coast, from farm and logging camp came the men of the Twentieth Maine, a volunteer regiment in the Civil War. It was at Little Round Top that the Twentieth Maine, with Joshua Chamberlain in command, performed one of the miracles of the Civil War and saved the left flank of the Union battle line. Outnumbered two to one, their front doubled back to the shape of a horseshoe. And with ammunition gone, the men fixed bayonets, charged, and not only broke up the Confederate attack, but also took 400 prisoners.

At Appomattox, the Twentieth Maine was one of the regiments chosen to receive the surrender of General Lee's infantry, and Joshua Chamberlain, the Bowdoin professor who had become a general, was appointed to command the Union troops at the ceremony.

Too often Civil War books concentrate on the Generals and Grand Strategy. "The Twentieth Main" provides and excellent balance between the generals and the soldiers and is a must listen for anyone interested in the details about how the common soldiers lived the equipment they used, the food they ate etc., throughout the war. It gives Joshua Chamberlain his just due, but also provides good narratives about the other officers and soldiers of this fabled regiment.

I loved this book!

This was a wonderful and sometimes moving book. At first I thought I didn't like the narrator, but I soon got accusomed to him and liked him very much.

The book combines historical detail with an easy flowing style of writing. It's as facinating as any novel. The Twentieth Maine was often at the center of crucial events in the Civil War. I sat one Saturday afternoon doing nothing but listening to the second half of the book. I would think it would be helpful to have a working knowledge of the Civil War before reading this book, and I would reccomend Shelby Foote's marvelous history of the Civil War prior to reading this book. The Twentieth Maine focuses soley on the battles fought battles fought by the heroic Maine soldiers, and the reader who has no knowlege at all of the Civil War might have some questions. I think, however, that even the absolute novice would enjoy the book because it is so well written. It seems to me it would inspire one to learn even more about the Civil War and the brave men on both sides.

From the formation of the unit, to the beginning of the care of the dead soldiers, to Gettyburg, to the Wilderness campaign.... this book is grabs hold of the reader and made this reader sad the book had to come to a close

This book is a first rate historical book of the times and lives of soldiers of the 20th Maine during the American civil war.

Both the writing and the narration keeps the book flowing through this important era of American history.

Military History, But With a Storyteller's Flair

This is an amazing story about an amazing group of men. The Twentieth Maine was involved in some of the pivotal battles of the Civil War. This book tells a cohesive story about a regiment that grew into a famous fighting unit during the war. It also relates the story with an engaging and sometimes poetic flair.
There are some tendencies by the author to paint the regiment as always being the best fighters and never losing in a battle that was their fault. (I know from some other books that even this great regiment had days where they didn't get the best of the Confederates.) Outside of that one slight criticism, I think this is one of the best books I have listened to.

This history of the regiment made famous by Chamberlain's stand at Little Round Top is surprisingly readable and covers a lot of Civil War detail not usually found in works such as this. An example was the abuses to the draft and how men took money to replace draftees then promptly deserted only to take more money from another draftee and desert again. This is a good read for military historians and doesn't overly lionize Chamberlain. The book fits the entire unit into perspective as a militia regiment which served with distinction.

If you liked Band of Brothers for it's "too good to be a true story" quality, you'll like The Twentieth Maine. A truly inspiring story of ordinary men in extraordinary times.

This book does a great job of making the people in it real to the listener, even though the events of the book are hardly current. It even bears a re-listen.

Excellent account of one of the Civil Wars most honored units

Delightful survey of the 20th Maine’s journey from backwoods conscripts, to trained unit of the line, to honor and immortality at Little Round Top. Joshua Chamberlain is, of course, prominently featured but does not commander the story until the very end. I particularly enjoyed the little-known story of the March from Appomattox to Washington, through Richmond, the discovery of the assassination, and the Grand Review. Flowing narrative, ably read. The ending was a bit abrupt, but I think that was a production issue, and not a short-coming in the overall product.

One of the finest Civil War books I've read

I was expecting this to be a possibly dry or mediocre book, but on the contrary, it excells nearly all other Civil War books I've read. Pullen had a true literary gift, and he deftly weaves primary sources into his own measured yet poetic prose. On a personal note, one of my ancestors fought in the 20th Maine, in company F, and I was amazed by some of the terrible situations company F got into. Everyone knows about Little Round Top, but I had no idea company F was nearly annihilated in the Wilderness. Makes my skin crawl a little, reflecting on how I exist at all despite what my ancestor faced.