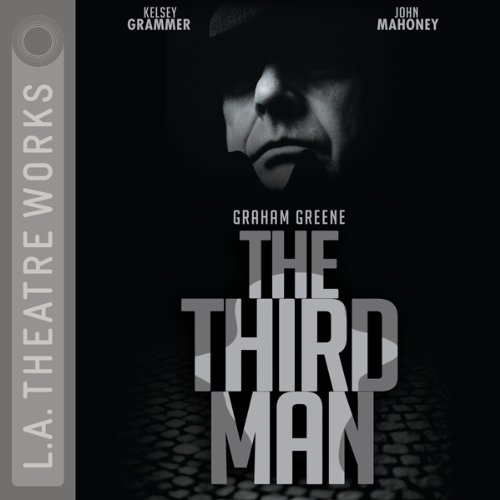 Somewhere in shadowy post-war Vienna, where everyone has something to sell on the black market, lurks "the third man", who witnessed the murder of Harry Lime. The police don't care to investigate, but novelist Holly Martins is haunted by the death of his friend, and his search for the killer makes for electrifying drama.

Voiced with the just right amount of innocence, arrogance and aplomb by the perfectly cast Kelsey Grammer an American writer, Holly Martin, arrives in the 1947 war-ravaged city of Vienna expecting to meet an old friend but ends up being an amateur detective in a murder investigation. What happened to Harry Lime? Was Lime hit by a car or was he pushed, or was it something else altogether? Grammer‚’s old Frasier partner, John Mahoney, does solid work as the voice of the military investigator, Major Callaway and veteran British actress, Rosalind Ayres, shines as the lost and beautifully enigmatic, Anna Schmidt. This taut audio adaptation closely follows the original Graham Greene film script right down to using the classic Anton Karas theme music. Classic noir.

This is NOT Greene's The Third Man

What disappointed you about The Third Man (Dramatized)?

Rather then performing Graham Greene's brilliant play about 1945-46 war-ravaged Vienna, the theater troop change Greene's words, which changes the deep meaning of Greene's sophisticated characters. Much better to buy the original movie and see what Greene originally wrote as a movie.

What could Graham Greene have done to make this a more enjoyable book for you?

Been alive to veto this travesty of his work.

Someone faithful to the writer's writing.

If you could play editor, what scene or scenes would you have cut from The Third Man (Dramatized)?

Cut this whole performance and saved my money for the original movie.

I listen to my shelf of Greene audiobooks frequently – all his great novels – but this audiobook is not NOT the spirit or words of Greene's screenplay – so it sits unused as my only bad purchase from Audible. (Thank you Audible for offering this "review" function on your site.)

The cast are excellent, bringing this story to life with wit and skill. Greene's story of Vienna's ugly black market trading is carefully recreated by the cast, the soundtrack and the sound effects used, and it works well - it's entertaining and engrossing. Kelsey Grammer gives a particularly praise-worthy performance as Holly Martins.

Excellent production of The Third Man. I also really love hearing Kelsey Grammer and the Late John Mahoney. A really wonder cast. My only regret is that it wasn't longer. Time flew by listening to it.

loved it!! big Mahoney and Grammar fan, A+ story and acting. absolute superb and a fascinated tale.