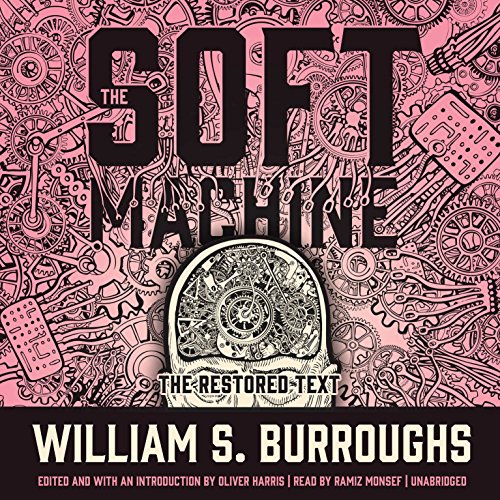 The Soft Machine: The Restored Text

In The Soft Machine, William S. Burroughs begins an adventure that will take us into the dark recesses of his imagination, a region where nothing is sacred, nothing taboo. Continuing his ferocious verbal assault on hatred, hype, poverty, war, bureaucracy, and addiction in all its forms, Burroughs gives us a surreal space odyssey through the wounded galaxies in a book only he could create.

A total assault on the powers that turn humans into machines by writing and fixing our life scripts, Burroughs' original "cut-up" book was itself rewritten in three different forms. This new edition of The Soft Machine clarifies for the first time the extraordinary history of its writing and rewriting, demolishes the myths of his chance-based writing methods, and demonstrates for a new generation the significance of Burroughs' greatest experiment.

This book has greatly changed my opinion of art as a whole. I don't think that people create art, I think that people discover art. This connotes the idea that art is everywhere, it just takes us to find it and appreciate it. I'm very interested in the cut up method and the possibilities that stem from it. I'd hate to try to hogtie this book with a general description, because obviously it aims to elude all description. But Irecommend this to anyone open minded amd nonjudgmental. The cut up method forces us to see the unseen connections between anything and everything. Sometimes the words just seem like a lot of shit. Other times they're very profound and thought provoking.

that's the story. soft machine is the human body.. thought I was a fan. Not so much

i realized why it needed a lengthy prologue to describe why it needed so many revisions and rewrites and everything i should know before trying to listen to this piece of trash when the book started and i had to turn it off after just a few minutes. i wouldn't recommend this book to an enemy.

I respect rather than love it. Like Gravity's Rainbow's sewer scene on his knees, bare as a baby ... or William T. Vollmann's telephone exchange between steel reefs, a wire wrapped in gutta-percha vibrates: I hereby...zzZZZZZ...the critical situation...a crushing blow....The sleepwalker's all eyes; the realist is all ears; their mating forms the telephone. Later perhaps, I see parts, flashing, cut-in, from David Lynch this is a formica table or Cronenberg's not naked lunch or beginning of Kubrick's 2001 apes confronted with steel. Celluloid burning. when we came out of the mud we had names. Perhaps, Trump Tweets massacred by homoeroticism: I have never seen a thin person drinking Diet Coke 11:43 AM - 14 Oct 2012. Thinking man's thin man. Marlowe and Philip K Dick detectives utilizing third-person singular indirect recall, though now using the cut-up method, Burroughs unsettles and alarms with images of consumption. Pan God of Panic piping blue notes through empty streets as the berserk time machine twisted a tornado of years and centuries -- wind through dusty offices and archives -- Late night Trump tweets interrupted because The U.S. cannot allow EBOLA infected people back. People that go to far away places to help out are great-but must suffer the consequences! 6:22 PM - 1 Aug 2014. The time to be Messianic is now. Word Hordes of the World Unite! I feel like I just jumped off a modern James Joyce Finnegan nightmare bridge. Not even my warm bath, diet Coke, Hi-Chew blood sugar highs and restless foot cramps can keep me from the dizzying nature of Wind turbines are ripping [Scotland] apart and killing tourism.Electric bills in Scotland are skyrocketing-stop the madness. ...High on ammonia issuing insane orders... Grammy award goes to Adele 'Song of the Year' HELLO? Reading paperback 3rd edition on back in bath. 'Record of the Year' HELLO? Listening to audiobook of revised edition. 'Best Pop Solo Performance' HELLO? HELLO? HELLO? The inconsistency between editions seems right. Lost seems right. Unsettled seems right. Unfinished loop seems to capture the Burroughs sense of a living text. I'm adrift. Wet certainly. Drowning. Cut the word lines -- Cut the music lines -- Smash the control images -- Smash the control machine -- Burn the books -- Kill the priests --Kill! Kill! Kill!. Amazing how the haters & losers keep tweeting the name “F**kface Von Clownstick” like they are so original & like no one else is doing it... 9:35 AM - 3 May 2013. Welcome Mr. President. President Trump welcome to the future. - nothing here now but circling word dust - dead postcard falling through space between world - this road in this sharp spell of carrion -

The Soft Machine, the first book in William S Burroughs Nova (aka 'cut-up') trilogy. This version (the 'restored text') is an attempt to reconcile three distinct publications each of which underwent substantial rewrites. The plot which plays a minor role in the text, concerns mind control and employs an unusual method to break. Unfortunately, most of the text is consumed by Burroughs 'cut-up' technique where text is fragmented, randomly pieced back together and then edited in an attempt to make sense. Furthermore, much of the remainder is consumed by an obsession with sodomy that becomes mind numbingly boring.

For its time, Burroughs may have been viewed as avant garde and the trailblazer of a new literary format, but he seems analogous to Timothy Leary in terms of impact. Many of the embedded cultural references are likely to be obscure to most readers today. This is best viewed for historical context and provides a window into the degree of envelope pushing that was going on at the time.

The narration is extremely well done.

Note: the first hour consists of the editor of the restored text version, detailing all the nuances for the various versions as well as personal aspects of Burroughs along with his other works and provides essential background.

The voice is an attempt at imitating Burroughs, which makes it unlistenable. Burroughs had emphysema from constant smoking, causing him to speak even the most mundane sentences with uegency to try to finish his thought before running out of breath. This narration convinces me yet again that nobody ever really responded to Burroughs words, merely to his rushed, urgent delivery, which they mistakenly imagined meant these words must be terribly important, in ways that none of them can articulate because they are so mysterious.
Verdict: a nonsense word-salad drug diary, delivered by an imitation emphysemic. Don't waste your time.

Gets really boring after awhile

Although Burroughs style is (or was) revolutionary, and although the book was interesting for a while, I was eventually bored by its repetitiveness.

I wasn't a huge fan of Naked Lunch. But this is a whole new animal. This novel is beyond my capability of description. It boggles the senses. It's the purest manifestation of finding beauty within depravity and it is, as far as I am concerned, the ultimate distillation of the Beat movement. Burroughs was a genius. This book is the proof.


That is the simple explanation of an experiment in language and reality that is not science fiction, unless you consider Salvador Dali to be an impressionist, and Pablo Picasso a Photo realistic, because a simple word like bread is not and is all that you thought it is, money, food and torture in the space of two sentences, hole is a subway an anal cavity and a space in the earth all used interchangeably and without regard to your feelings or expectations these is writing that destroys moral and logic to instances of absolute lucidity and total confusion, writing that still shocks with its audacity and nihilism of all that is we want to believe is human and turns it into animalistic savagery that know no morality or forgiveness it is exposure to the subconscious most evil and the conscious most beautiful. It is a poem written in vile and excrement that rises above its basic elements by the magic of turning words into electrifying feelings into visions of an elemental power, it is language as a virus.

I exposed my mind to William S. Burroughs when in my twenty with Junky, Exterminator!, Queer, and The Naked Lunch, all mind bending indescribable contaminations into a world I would never explore on my own, he was the subculture not the glorified romanticised subculture of dressing up but the one you never come back from, the world were most enter to die, where cockroaches and William S. Burroughs are the only ones to survive, he held estrange beliefs and was erudite he spoke but not to you but the universe in declarations.
I saw him once in 1995 in Vancouver while in a concert by Laurie Anderson the album being promoted was Mister Heartbreak he had a poem in the album but I never thought he would be there but he appeared out of the darkness in an old fashion suit and hat and declared in a crackly voice “language is a virus from outer space” turned and left the stage. I never forgot that moment it is his contribution to language not a language but all of them.

If you are squeamish or easily offended this book is not for you, if you want plot or romance, not for you, if you want a mind bend with a kaleidoscopical injection of psicodelia and pina colada, go for it, if you like poetry or antipoems, images and electric shocks this is the book climb on board with your soft machine and be prepared to be liquefied or solidified into a tunnel that bends with no flexibility.