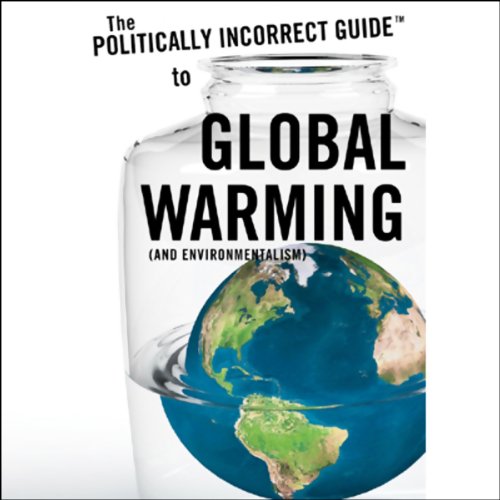 The Politically Incorrect Guide to Global Warming (and Environmentalism)

The big media have spoken on the question of global warming, and the debate is officially over. "Be afraid, be very afraid", warns Time magazine. But have Al Gore and his environmentalist allies really proven their case? Not even close, says Christopher C. Horner.

In The Politically Incorrect Guide to Global Warming (and Environmentalism), he exposes the shoddy science, plain dishonesty, and hidden political agenda behind the biggest phony environmental scare since, well, since green predictions of catastrophic global cooling in the 1970s.

The Politically Incorrect Guide to Global Warming (and Environmentalism) provides a provocative, entertaining, and well documented exposé of some of the most shamelessly politicized pseudoscience we are likely to see in our relatively cool lifetimes.

Not great for Audio

This type of book definitely lends itself more toward print. There are too many references, and asides that don't work well in an audio format. If you have the option, I would choose the print edition of this book.

If you have any doubt at all regarding the science and truthfulness of Al Gore and his band of mindless followers then give this book a listen.

I used to think Religion was one of the worst users of peoples fears to get their way, but there is a new contender. Global Warming Alarmist might even be more dangerous than Religion for taking away a persons ability to see both sides of an issue. They use every trick in a Cult handbook with practiced ease and modern skill.

This book is not about how perfect humans are, or that there is no need for improvement. It is a here-to-fore unseen side of the issue. The critical side that requires acknowledgment and not to be simply tossed aside as a EXXON shill. It may shock people to realize that questioning god does not make you the devil. (Although if you do belive that then don't bother reading this book. It will just upset you.)

This book is a good starting place. If you don't belive the authors claims look them up for yourself. The evidence is there and some people (like me) need to be nudged in the right direction. I never questioned the greenhouse effect. Why whould I? What would they have to gain? Therein lay Al Gore brilliance! because, in fact, they have much to gain.

Even though I know how a real greenhouse works I never noticed how silly the global greenhouse argument is until I gave it the slightest thought and most likly wouldn't have unless I read this book.

I don't want the enviroment to be wrecked because of me, but I'm not going to buy every air-headed claim that I'm to blame when I'm not. It's in my best interest to find out.

Enjoy if nothing else the arguments, life isn't as black and white as Al Gore whould like you to think.

This book is great and offers the reader awesome content on the &quot;Green&quot; motivation that appears to be more about promoting Socialism and economic totalitarianism than saving the environment.

You will see the origins of cap and trade (Enron), Al Gore's non-scientific education, Grant-Hunger of Big science, and the selective data used to sell theories to the public.

Lastly, you will see how Climate Science is full of non-Scientist posers. You have Noam Chomsky, a sociologist-Linguist, pretending to be a scientist. Everyone knows and Chomsky admits he is a socialist, so big surprise, he is a Climate Science believer!

If your like me and sick and tired of hearing about "global warming". This book is for you!!! All the Al-Goreanites might not appreciate to elegance in which this book is written.

Humorous and well written. Will be attacked by the usual suspects.

I have read Elizabeth Colbert's "Field Notes from a Catastrophe" and the Modern Scholar lectures on "Global Warming" as well as seeing "An Inconvenient Truth". When I finished these books and movies, I became interested in reading about opposing scientific information. I went in with a open mind about the information. However, I found that the author spent more time giving nonspecific information and general comments about the integrity and intentions of the people involved with Global Warming research, i.e. Al Gore, Jim Hanson, the French government !! and EU, than he did discussing the scientific underpinnings of the dissenting scientists. It was only into the second half of audiobook that he began to more systematically cover a scientific point or fact with a counterpoint. His overall premise that the global warming debate is only a ruse to create a UN based world government which plans worldwide wealth redistribution is a little over the top even for a pundit. But I found the discussion about the accuracy of some of the information going into the climate models intriguing and worth reading more about.He did give suggestions on further reading which would probably have a stronger science basis. I would recommend skipping his book and pursuing his suggested readings instead.

The author is right that there is much exaggeration by environmentalists. But he thinks the remedy is exaggeration on the other side. It is no help in sorting out the conflicting claims on this issue.

Not totally wrong, but...

This book is filled with so much sarcasm and hyperbole that it totally masks the authors message. There are some legitimate points to be made here, but the book is so laced with anti-Gore sentiment, and sarcasm about the "Greenies", that any accuracy he is trying to make about errors in the hypothesis of global warming lack credibility. He should have taken a far more objective approach and left the emotion at home. This author clearly has an agenda, and it overpowers any message he is trying to deliver about the chicken little nature of the global warming scare.

Excellent, common sense, well-documented book about the real reason so many otherwise obviously sane and intelligent people claim to believe the incredible apocalyptic claims of global warming. It is their way of pushing for total government after the Communist plans for world domination didn't work out for them. The forces now at the forefront of this world-wide effort to destroy free market capitalism and put all power in government dictatorships are the former Communists who now call themselves "Greens" --hence watermelons, green on the outside and red on the inside. The author knows these people and their organizations and tactics and he tells about them in this book in an entertaining way for such a serious subject.

A little too conspiricy theory

I liked the science of this book and agree that more open debate needs to be in place before we go cutting off our nose to spite our face. I was involved in the Air Conditioning industry when CFCs were being phased out and guess what? Science now leans toward the idea that these chemicals were not creating that ozone hole - it's probably a weather pattern. BUT we aren't bringing back the efficient CFCs we probably wrongly phased out.

However, "green is the new Red"? The argument just didn't hold up and it sounds a bit silly.
The best approach for a book like this is to "follow the money".
See who is best positioned to benefit from the changes implemented to avert man made global warming and see if they are behind the agenda.

Informative but there were many places where I just shook my head and went back to my book about the Roswell cover up:-)

If you take a look at the picture at the paperback book cover the bottom of the book says that Mr Horner is a senior fellow of the Competitive Enterprise Institute. One of the CEI's major funders is ExxonMobil, which has somewhat of an incentive to doubt climate change. The fact that Mr Horner is a business man and not a scientist is also notable.

Very deep and good overall, but a little anti-European and pro-American, for no apparent reason...

1% dealing with anything environmental, 99% badmouthing anything red, communist or socialist. 100% about Merika being sooo put upon and dear sweet little ol' capitalists being so hard done by. A crock of shite!

Although the book is now some 12 years old, it is never the less very informative both about the history and politics associated with Global Warming (Climate Change) concerns. The content seems to be well referenced from reliable sources and sounds (at least) genuine; I felt that much of the information was very believable, more so in fact than some of the claims made by the lobby group promoting anthropogenic Climate Change. The book does not argue that Global Warming is not taking place but it does contest the fact that it is solely the result of man's activities and it is very scathing of the proposed plans for spending vast amounts of money in a quest to stabilise greenhouse gases. The insights into political shenanigans on all sides are interesting if not particularly surprising. One implication is that Europe, through the UN, actually promoted the original UNFCCC treaty with a view to tempering US industrial growth. The last chapter on the UNFCCC is itself well worth a listen. Bottom line is that after reading a few books on Climate Change of late I have become increasingly skeptical of what our administrators are trying to do both with our money and minds!!