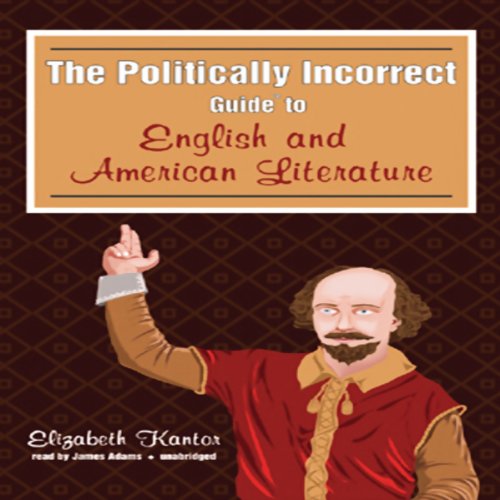 These days, English professors prefer to teach anything and everything but classic English literature. They indoctrinate their students in Marxism and radical feminism, show them Michael Moore's Fahrenheit 9/11, and teach them the "post-colonial literature" of South Asia. When they do teach a genuine work of English or American literature, they use it to propagandize against our "oppressive" Western culture.

The Politically Incorrect Guide to English and American Literature exposes the PC professors and takes you on a fascinating tour through our great literature - in all its politically incorrect glory.

"A wise and sobering book that is required...for anyone who cares about the future of the humanities. (The New Criterion)

Having made the regrettable mistake of not studying Literature in college, I am trying to make up for lost time by purchasing lectures on the topic and reading classics. So when I saw this book, that promised to teach Western Literature "in all its politically incorrect glory," I was really excited. I want to study Literature, not politics! I hoped that finally, I'd have an unbiased, unpoliticized view of Literature from someone passionate about it.

Sadly, this book is very much about politics, of the most bitter variety. Kantor has a bone to pick with all those Marxist English professors. And having fled the USSR as a refugee, I am no Marxist. But gees, I want to hear about Literature, not about how flawed the modern leftist movement is. And the vitriol! Even the narrator, in an effort to capture the smugness of the author, sounds like he has a stick up his bottom.

It was just stressful to listen to this book. It was so mean-spirited against an enemy I've never encountered (I majored in a science -- not many Marxists there), filled with irrelevant digressions into current events. It turned out to be the very thing for which it claimed to be an antidote -- an injection of unnecessary politics into classic Literature.

I kept giving it second and third chances, but had to stop, at last, when Kantor suggested that the best way for today's society to prevent date rape is to teach its women not to drink. The irrelevance of this when discussing Chaucer was only half the trouble.

If you're in the same predicament as me, I highly recommend Professor Michael Drout's lectures (from the Modern Scholar series). He is someone passionate about English Literature and actually speaks ancient English dialects -- something even that curmudgeon, Elizabeth Kantor, would commend.

This author has a big chip on her shoulder about the left-wing university culture. I had hoped for more literature and less whining about liberals. Also, the female author spends lots of time complaining about feminism and how women would be happier and better off in 'traditional' womens roles. This may be true of some women some of the time -- but is quite a large leap to make considering that in a traditional western society she would not be publishing books but having kids and washing dishes. I thought is would be a joyous exploration of literature without all the pontificating and agendas, it's not.
If you want to listen to a smug and 'look down your nose' narration of what is wrong with how many people think about English lit nowadays this is your book.

An ok review, if you already know the stuff.

This is an OK review of the things you might have learned in college or high school. Very little new information, and an occasional screed about political correctness or feminism. I'm sure there are better books out there, but they're hard to find on audio.
And why they chose a British man to read the work of an American woman, I simply don't understand. It makes for some awkward comments, when he talks about America or being a woman.

Yeah, but once you get past THAT...

There is an agenda in this book that is unavoidable, strangely entertaining and especially odd when you remember the words being read by a British male are written by an American woman.

There is also a college semester's worth of good information about good writing and the folks who produced it. If, like me, you managed to duck this stuff in younger years, this is a very interesting overview that is likely to spark interest. Lively, ironic and with the gloves off, you can hear about which famous poets were drug addicts and philanderers, and which of their works would be a good starting point. And then there's the guide to U.S. poetry - in a total of under 100 lines!

Mild problems figuring out when we're on text, when we're hearing sidebars and especially, when material is being quoted. Beyond that, jump on in and enjoy a witty dash through 1,000 years of literature. It's too much fun for conservatives to have to themselves.

Would you listen to The Politically Incorrect Guide to English and American Literature again? Why?

Maybe. I found the content interesting, but was initially put off by the narrative asides complaining about the takeover of the canon by the liberal factions. I would have preferred more content about what the author's preferred reads were and why, and less whining about how things have changed.

I thought his performance was fine, but I wonder why a male was chosen to read a female author's book. Given the frequent rants against feminists, I wonder if I would have been less put off if I was hearing a female narrator

How refreshing in these twilight times to come across a conservative who knows literature and communicates it wittily. I for one am bored and irritated by the way in which liberal intellectuals have hijacked higher learning. This book is worth listening to many times for its literary insight, apart from its merits in the department of common sense.

What made the experience of listening to The Politically Incorrect Guide to English and American Literature the most enjoyable?

I appreciated hearing the honest confrontation of the distorted and warped the agendas concerning literature. Oh no! What if we read and examined literature for its literary value?

I think the title says it well.

What does James Adams bring to the story that you wouldn’t experience if you just read the book?

Honestly, I would have read through the material quickly and less thoughtfully.

The entire book was interesting and bold.