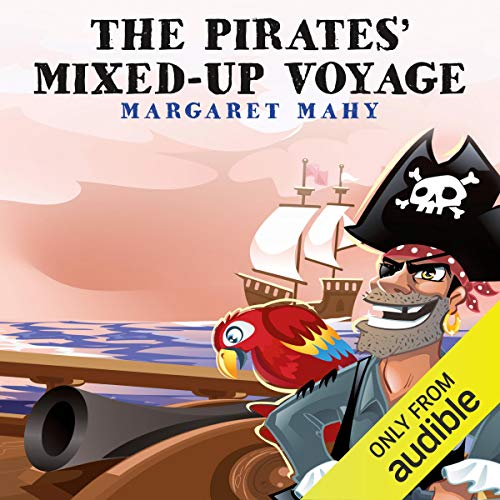 Captain Lionel Wafer and his fellow-pirates - Toad, Brace-and-Bit and Winkle, are no ordinary ruffians. Clinging to the belief that life should be simple, free and unplanned they set off in a converted teashop of a ship, renamed The Sinful Sausage, to sail backwards and forwards over the bounding blue. In no time a dastardly plan has formed in Captain Wafer's mind to kidnap the famous inventor, Humbert Cash-Cash, from his sunshine retreat and purloin his inventions - or at the very least pinch his diamond doorknob. But they land on the wrong island - and that is where their troubles start...

A delicious kid's story with something for adults

What did you love best about The Pirates Mixed Up Voyage?

It's a story on several levels. My kids enjoyed the pirates and their (mis-)adventures; what can you say about nearly being devoured by a dragon and then singing it to sleep? But it's also got something for parents too - the theme of free will as being acted out by Captain Wafer vs. Toothpick's argument in favor of doom and destiny is just an example. If you're a parent who enjoys a story with silliness and seriousness mixed together, then this can make a great family listen on a car trip.

There are several I really like, but I'd say my favorite is the muddled-but-brilliant inventor Humbert Cash-Cash, who has enhanced the world with such useful inventions as Polar Zone Gingerbread and self-replicating peanut butter sandwiches. Wonderful silliness without being slapstick.

Again, there are a number of good ones, but perhaps my favorite is when the ignorant pirates charge onto island 888 looking for treasure. They can't read, so they go right past signs warning them of terrible danger and are nearly eaten by the dragon the find at the end of the path...only to escape by giving the dragon rum and gingerbread, and then singing it to sleep.

Avast ye landlubbers...adventure on the horizon

What did you love best about The Pirates Mixed Up Voyage?

A great story, with characters you cant help but fall in love with. Its the pirate adventures we all dreamed of as children, escaping the humdrum of society and running away to find adventure.

The pirates make the story, the mismatch collection of swashbucklers each flawed in their own ways, tin ears,bad knees...a penchant for falling in love, but all suffer from the inability to read; which makes for endless fun upon the Sinful Sausage(their ship).

Mistakenly landing on "dessert" island instead of a desert island...you can't help but love an island made entirely of pudding...i want to live in a fruitcake*yum*.

If you could sum up The Pirates Mixed Up Voyage in three words, what would they be?

What was one of the most memorable moments of The Pirates Mixed Up Voyage?

Mitchley understands the nonsense that children so adore in storytelling

Great for kids of all ages

A great story read by a narrator whose voices are spot on for the characters.