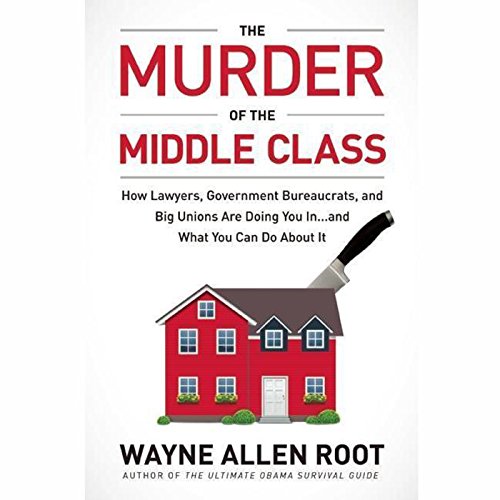 President Obama's goal is to create a two-class society: the poor and the super-rich.

Decades of liberals - and even a few supposed "Republicans" - have helped push America toward this goal, and President Obama hopes to finish their work. Why? Because this two-class society cements the crony capitalism that feeds big government and keeps corrupt big shots like Obama and his friends in power, permanently enshrined as the ruling class. Meanwhile, it keeps everyone else hooked on the government like a drug that's impossible to quit.

What's standing in the way of Obama and his pals? The middle class.

That's why Obama wants to murder the middle class - and he's almost succeeded.

Wayne Allyn Root, author of The Ultimate Obama Survival Guide, is back with The Murder of the Middle Class. Root, a serial entrepreneur and self-made man, steps up to defend the middle class and to offer them a rock-solid plan for fighting back. The Murder of the Middle Class is a must-listen for everyone who ever said, "Hey, I did build that myself!"

How Not to Make Your Point

Let's say you want to write a deeply partisan book blaming all manner of ills on President Obama. Well, if you do that, you should certainly expect those who like President Obama to hold your book to a pretty tough standard. No surprises there. But what about those who might not like President Obama? It shouldn't be too hard to get them to agree, right? Well, there is a way to turn them off too and Wayne Allyn Root has found it. You make arguments so stupid and so deep in conspiracy theory that they are embarrassing. I am no Obama fan but this book does nothing to advance the legitimate reasons for finding fault with him. I abandoned ship about half way through.