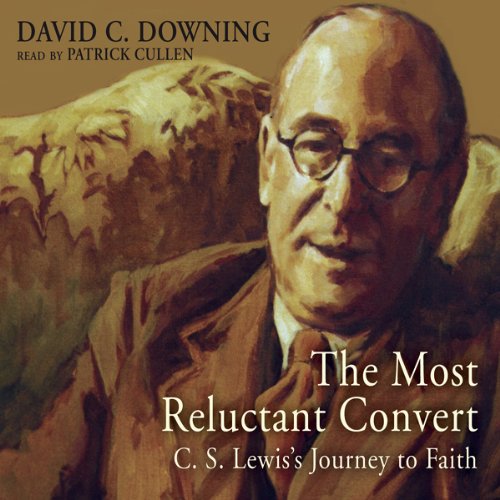 The Most Reluctant Convert

His books have sold millions and include classics like Mere Christianity, The Screwtape Letters, and The Lion, the Witch and the Wardrobe. Yet C. S. Lewis was not always a literary giant of Christian faith. How did he evolve from staunch atheism to become one of the most beloved and renowned Christian authors of our time?

Reluctant Convert was a short read, only about 5 hours long, retelling of Lewis' life and an excellent evaluation of the progress he made from childhood imagination through boyhood atheism, materialism, dualism, occultism, pantheism, idealism and finally to adult faith in God and later in Christ as his revelation. What an amazing journey! It was well told and read. Those "-isms" were clearly explained with tons of illustrative material. By the way Downing interprets the Mrs. Moore episode in an honest but sensitive manner. My headline is a Lewis quote that suggests that the revelation of God in Christ captures the essence of the dying rising gods but is profoundly historical in nature. I was thinking that Donald Downing has done us a favour by correcting many of the myths and misreadings of Lewis by giving us the straight goods about Lewis capturing his essential legacy.

One of the most significant events of the 20th century was the conversion of one of the English speaking world’s most influential atheists into its most eloquent Christian apologist. When historians consider the most prominent leaders that brought Britain through World War II, C. S. Lewis and Churchill are at the top of the list with Churchill handling the military and political side and C. S. Lewis handling the spiritual side. And, Lewis had not just been a casual atheist. At 17 he wrote to a friend, "I believe in no religion. There is absolutely no proof for any of them, and from a philosophical standpoint Christianity is not even the best." Of his time as a soldier in the trenches of WW I, one of the most cruel of wars, he proudly boasted that he “never sank so low as to pray.” While promoting atheism, he also dabbled in the occult, the paranormal, and in attempts to contact the dead. But, in 1929 he began to admit the existence of God and in 1931 he committed himself to Christianity. Lewis didn’t just change his mind and become a Christian. He made a complete about face and became a devout Christian, a spokesman for and defender of the faith. The question of how that could happen is certainly worth study, but C. S. Lewis himself wrote about his journey toward conversion in his book, “Surprised by Joy.” Others have written on the subject also. Why do we need another one?

Lewis’ own book deals a lot with the struggle inside and the lifelong search for “joy” which he would not define as most of us would. For him “joy” was something pure and could never be based on anything unreal, imagined, or untrue. With his belief in the meaningless of life and the despair that it produced, there was no place for that joy deep inside that is firm and secure, never fleeting and uncertain. He said,  "Nearly all I loved I believed to be imaginary; nearly all that I believed to be real, I thought grim and meaningless." Lewis tries to explain how he discovered that joy in Christianity. Other authors have also written, but most have focused on what happened, on how others influenced him. This book is well-researched, using original resources, and tries to show what was happening inside of Lewis’ mind through his writings as well as the events and the writings of others.

And, they show no Pauline kind of conversion. They show a struggle, almost as if God was dragging him, kicking and screaming, to a knowledge of Him and yet without Lewis knowing that he was being pulled. Lewis’ conversion (or as this book calls it “re-conversion” since he grew up in a Christian home and as a child attempted to say his prayers and be devout) was reluctant as if he had tried every other avenue and no longer had a choice without being dishonest with the truth he was facing.

If you’re not a fan of C. S. Lewis, you may well enjoy this book, but may also find it a bit slow and dry. If you are a fan, you will enjoy and savor watching the process unfold through the words in front of you. You’ll also enjoy reading of Lewis’ contact with famous names like Yates, Tolkein, G. K. Chesterton, George MacDonald. As noted, the book was well researched, but there was part of the book that involved a bit of speculation, and that was at the very end, at the time of the final decision to become not only a believer in God, but a Christian. But, it was clearly labeled as so and was very enjoyable. I only found that I was disappointed that the book ended. Yes, the author’s task was done and he had completed what he had set out to do, to describe how Lewis became the reluctant convert. Walter Hooper calls Lewis the "most thoroughly converted man I ever met." Finished with the journey of how he got there, I wanted to continue with him on the rest of his journey toward becoming such a spokesman for the faith, how he wrote all of the books that I love so much.

Interesting, but I kept taking breaks

I learned some interesting things about Jack/CS Lewis, but it sometimes felt very dry, so I would leave and come back to it.

The Man Behind the Legend

C.S. Lewis's name is mentioned and instantly his amazing accomplishment and bold Christian faith are recalled. But David Downing takes the reader into the backstory, and what led C.S. Lewis to the faith. it was not an easy road. As a matter of fact, he was an avowed atheist in his youth. His story gives anyone hope for someone who seems so far away that it is never too late to come to the Cross, on this side of Heaven. What a beautiful story of persistence, perseverance, and faith. Patrick Cullen's narration is perfect for this work.

Insightful look into the conversion of CS Lewis

Well researched, well written, well read look into the conversion of a most insightful man.

for fans of Lewis, this is a wonderful summary of the great man's formative years. I have no complaints, save one: when speaking Lewis's direct quotes, Patrick Cullen should not switch to an English accent. otherwise, a very enjoyable read.

Struggles behind the man

This is a story of a man best known for having the answers. It tells his story of struggles. It makes Mr. Lewis human and his writtings more powerful and less pure intelectual theory. A great book for anyone interested in CS Lewis writtings and how they were shaped.

Best book on Lewis that I have read

I appreciate the in-depth look at Lewis through his lifetime of writings. Rather than presenting a simple biography, this book presents the long process of thought and experiences that led to Lewis’ conversion.

Keep your thinking cap on!

A rewarding walk through Lewis's thoughtful journey to truth. A welcome refutation of the present creeping darkness around us all.

Further insight into a great man

How much more do I enjoy reading CS Lewis's books? Far, far more. Peralandra is now my favourite.

I am not a fan of a Biographies. This is the only one that I have completed. It opened up 'Jack' to me in a way I found interesting, informative and yet, prosaic. I don't know if I would recommend it, because I'm rather negatively biased against it, for no other reason than that I'm not a fan of Biographies! I have yet to read 'Surprised by Joy', which is C S Lewis' personal Autobiography, but I will, in due course. I may then return to review my review!