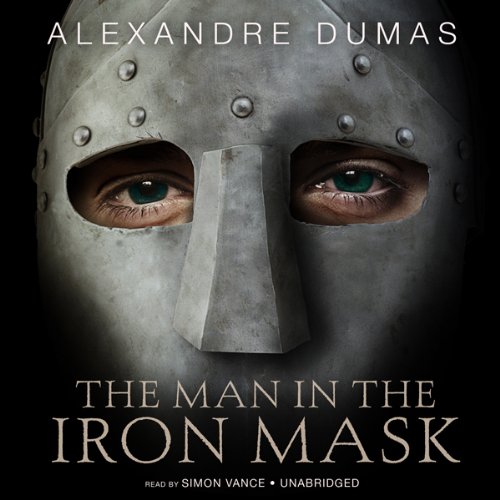 Thirty-five years after the events of The Three Musketeers, d’Artagnan, Athos, Porthos, and Aramis find themselves caught between conflicting loyalties in a power struggle that could change the face of the French monarchy.

For eight long years, a young prisoner has languished within the dreaded Bastille, his face hidden in an iron mask. He knows neither his true identity nor the crime for which he has been imprisoned. But Aramis knows this secret—a secret so dangerous, it could topple the King from his throne! Will his cause divide the once indivisible band of musketeers?

A tale of mystery, adventure, and political intrigue, this conclusion to Dumas’ swashbuckling musketeer saga is based on the true story of a masked prisoner who dwelled in the Bastille during the Louis XIV’s reign and whose identity remains in question to this day.

This swashbuckling conclusion to Dumas’s musketeer saga pits the brave band of heroes against each other in a power struggle that could change the face of the French monarchy.
“No part of the world has ever seemed to me so charming as these pages, and not even my friends are quite so real, perhaps quite so dear, as d’Artagnan.” (Robert Louis Stevenson)
“The name Alexandre Dumas is more than French—it is universal.” (Victor Hugo)

not the real book

okay it seems this is not the correct book it does not start in the prison as I believe it does in the book. Im pretty confused. Had to download kindle book to check. Not happy.

I enjoyed the finale of the D'Artagnan books

This last volume of the D'Artagnan books continues directly from the volume Louise de la Valliere. The story is engrossing with many plot twists. I enjoyed the whole series. One of the interesting aspects is that the characters are all complex, even our heroic musketeers. They are not saints, by far. Some of our heroes are quite greedy and even though they are such loyal friends, they allow selfishness and ambition to override the best interests of their friends. In particular, I'm thinking of how Aramis exploited Pothos' gullibility, as one example. But I think these types of ethical dilemmas are what make the book so interesting and the adventures so engrossing. I also found the amount of emotion and affection shown by some of the men most interesting - Athos' love for his son is one example. I don't know that men are always depicted this way - maybe French men are more demonstrative of their affection than the English, for example? All of these aspects make the characters well-developed and very human.
Add to that Simon Vance's superb reading - how does he manage to do all those voices and accents? - and the book gives you hours of wonderful listening pleasure.

Three Musketeers great, this, not so much.

First of all, here is another triumph for Simon Vance, who should own the Audible Academy Award. Most actors only have to play one part, Simon Vance plays multiple parts with distinction and feeling. Consistently. When I search for a new book, I frequently go to the Simon Vance narration list to make my next selection.
Now for this book, the Three Musketeers is fanciful and upbeat, and has to be read before attempting "Iron Mask". However in comparison, this book is gloomy as roadkill, and I hate to see animals killed on the side of the road. It is so gloomy it borders on ridiculous. And if you do endure the book, you will find that the title is a misnomer. There is very little reference to anyone in a mask. It should be titled "The Misadventures of a bunch of disappointed Whiners". One positive feature of this book, which I recognize is fiction, but at least fiction that was written in the early 19th century, so that the writer had a feel for his subject, is that now I have a greater appreciation for the energy that the French displayed in systematically destroying their aristocracy. What a hideous system. Oh well, do your thing, I warned you.

I was prepared for fun and adventure. It may be for an accountant, because it just went over a money trail of an awful act.

Better than any movie

I've seen many, many movies based on this story and each one has the same theme. The man in the Iron Mask was the kings twin. History doesn't know whether he was or not. So, a lot of movies were based on the whispering of the French nobility. So, I decided after listening too/reading Oliver Twist and finding it didn't match any movie I decided to do this book. I was surprised that the movies have it wrong. Imagine that? But what do they have wrong and write? Read and find out! I like the narrator of this book as he doesn't get the voices confused as he reads along. I can also understand why this book should be required reading in school.

The Musketeers Get Old

The four musketeers age and are near the end of their careers. Huge disappointment after reading "The Black Count", the bio about Dumas' father, and "The Three Musketeers".

There is intrigue, and witty solutions, for the dangers our heroes get into and adventure. However, it dragged out way too long. And, when the man is put into the iron mask, that part of the story simply ends. I thought it would resolve later.

After the buildup in the previous two novels (Comte de Bragelone and La Valliere), I thought the climax and denouement of the plot involving the man in the iron mask happened and especially ended too soon. Some of the actions of the King Louis XIV are a little unbelievable based on what happens in the book. The best part of the novel is the interactions among the four musketeers. And I thought the way Dumas completes each of these four characters at the end of the novel was well done. I enjoyed the narrator and thought he chose excellent voices for the characters.

Essentially, it covers the four musketeers thirty-five years later where Aramis knows a state secret and attempts to over throw the king. However, it barely involves the poor soul condemned to the iron mask, not justification is ever redeemed, and we find ourselves mourning the lost of some beloved characters. The Three Musketeers was about the beginning of four intertwined souls and the Man in the Iron Mask is about their ending. Out of all of Dumas works that I have read, I am the least pleased with this one.

This story was not as thrilling as The Count of Monte Cristo but still a very good story.

Start at Chapter 29 for the Man in the Iron Mask

Since this book is part of a much (much) longer book, you will want to start at chapter 29 if you want to dive right in to the actual Man in the Iron Mask part. The chapters leading up to that set the stage for some of the other characters, so if you have time to listen, then do so! The performance was OK. Voices were consistent, and it was read at a good pace, I just did not like the voice he chose for D'Artagnion.

I have thoroughly enjoyed the books on an individual basis and as a much longer story. The performances of all the readers has been consistently very good all of them bringing something special, I have especially enjoyed the accents, how they are maintained as the same over long books like these is a wonder, I suppose its the way you do it.
As for the stories they are all very very good, my adjective's would fail to give the stories a description they deserve. I have enjoy reading the written histories of the times the fictional books cover. Whichever is preferred, if one is willing to undergo such a task, excitement pervades. Personally I liked the scenario's of the novels more. The books definitely killed off the idea that musketeers are ,Robin Hood type, heroes as depicted on film. I Loved Them All. Thanks for the best read of my life. Colin XXX.
l

yep like has been said forget the films, I rate this book 3rd best in the series

First the Count of Monte Cristo, then the Three Musketeers, and then the Man in the Iron Mask. This is a good one.

this was not the ending I expected. the story takes a twist in the middle that I hadn't foreseen. I enjoyed following the marketeers in the next chapters of their lives.