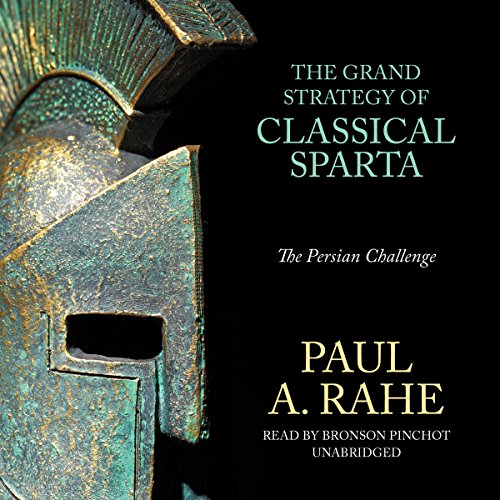 More than 2,500 years ago, a confederation of small Greek city-states defeated the invading armies of Persia, the most powerful empire in the world. In this meticulously researched study, historian Paul Rahe argues that Sparta was responsible for the initial establishment of the Hellenic defensive coalition and was, in fact, the most essential player in its ultimate victory.

Drawing from an impressive range of ancient sources, including Herodotus and Plutarch, the author veers from the traditional Athenocentric view of the Greco-Persian Wars to examine from a Spartan perspective the grand strategy that halted the Persian juggernaut. Rahe provides a fascinating, detailed picture of life in Sparta circa 480 BC, revealing how the Spartans' form of government and the regimen to which they subjected themselves instilled within them the pride, confidence, discipline, and discernment necessary to forge an alliance that would stand firm against a great empire, driven by religious fervor, that held sway over two-fifths of the human race.

It would be reedited, which would involve rerecording parts of the narration.

For those who enjoy Herodotus, Rahe presents an excellent integration of Herodotus's story with current research into the details of that story based on other accounts of history and archaeological research. Rahe's account is fascinating, if perhaps mis-titled since it struck me that rather than really focusing on a thesis about Sparta's strategy, he was really giving worthy study of Herodotus.

Would you be willing to try another one of Bronson Pinchot’s performances?

Maybe. The real question with this one is why the final product turned out so bad. At times Pinchot's reading is great. However--and it is a gigantic 'however'--about every 30-120 seconds, there is an awkward pause, followed by a phrase with Greek names (cities, people, etc.) which are then pronounced with an intonation that does not at all fit the rest of the sentence. Whether these terms are mispronounced or have been rerecorded to be properly pronounced according to someone's understanding of correct pronunciation I do not know. I can only note that some of them vary considerably from pronunciation used commonly in some academic circles (but 'correct' with ancient Greek pronunciation is a tricky topic). Regardless, the final result is jarring and often painful to listen to. It has forced me to return this book to audible despite the fact that, were it more polished, it would be joy to listen to Rahe's account at least 2-3 more times.

This much I can say with complete conviction: Whomever gave the final go ahead on releasing this version and selling it to people should be personally very, very ashamed. This goes for everyone on that chain of command, whether it be Pinchot, the producers, the audio editors, or even Rahe himself if he was asked to OK the audio before it was released.

Someone should have the sense of decency to repair this very flawed final product and present the improved version to all who purchased it at no additional cost. (Frankly, anyone who endured the full recording should be recompensed for her trouble.)

This is an excellent work, a scholarly but highly interesting amplification and re-telling of Herodotus informed and corrected by archeology, ethnography and the careful comparison of historical sources. But it avoids the dryness of much academic writing. The only negative is the poor performance of the narrator. His voice drones, he pauses before reading every name and his pronunciation of those names is execrable (e.g. 'ArJive' for 'ArGive').

The narrator stumbles over all the non English words

I had to give up listening after about two hours. The narrator stopped making sense of the clauses he was reading and it was driving me crazy! He would pause in front of every proper noun as if it surprised him, taking away all the flow and meaning of the sentence. Terrible job!

I really had high hopes

First it’s free, so I am not complaining too much. That said, I can only imagine Bronson Pinchot is reading italics and emphasizing names and places. However, it comes across like he couldn’t figure out how to pronounce places like Athens or names like Cleanthes (ok if you don’t know to pronounce each letter you might mess up the ending), so the audio folks went back and edited in him pronouncing the names correctly. It gives the whole thing such a stutter stop aspect I could only get through 3-hours (and that was all because I was driving and didn’t have something else downloaded). Solid meh at best. Which is sad because I love geeking out on ancient cultures and this book is rather good without the horrible narrator. Sigh, sad really.

Interesting topic and well written. But the narrator ruins it.

The narrator halts at every Greek word plus he doesn’t pronounce some of the names that are very well known properly. His style is also a bit wooden. I don’t know if I will finish listening. I love the topic and the in-depth information but it’s not an enjoyable listening experience.

Good but didn’t find its point

This is a good book, but misses, in that it doesn’t lay out the strategy of the Spartan hegemony. It recapitulates Herodotus for a large portion of the book, strangely diverges into Athenian politics and more deeply than one would think necessary. It seems the author just gets lost in the narrative Herodotus presents.

Amazing telling of the story of the Greeks VS the Persians. I found the narrator not that annoying as some here. honestly, the narration is fine. not amazing, but fine.

Required reading for a commander or an analyst

This book tells the story of how the world really is ruled and how it really works. A little known academic gem that helps to get your strategic calculus started.


the narrator made it impossible to listen to this book. worst narration ever.
don't waste you time on this one..