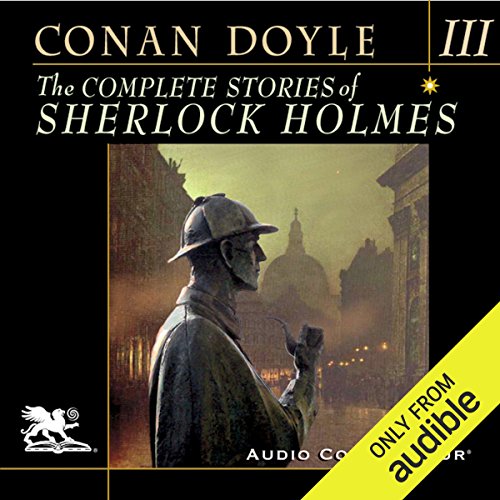 Arthur Conan Doyle never wasted time in getting his stories moving. His plots are always direct and refreshingly lucid, and the narrative has a velocity that sweeps you along right to the end. This was no doubt a large part of his immense worldwide success. Not surprisingly, each time he tried to end the series, his fans would howl in protest. But, as he says in the preface to his last collection of Sherlock Holmes stories, all good things must come to an end. And so it is with this series, as we have now arrived at the end of the Sherlock Holmes tales, Conan Doyle's most magnificent creation.

This last volume contains one novel, The Valley of Fear, and two collections of short stories: His Last Bow and The Case Book of Sherlock Holmes.

*(The Adventure of the Cardboard Box chronologically appears in the canon in The Memoirs of Sherlock Holmes - circa 1892-1893 - but, for some reason, appears in this Volume 3 audiobook.)

Volume 3 finally finishes the Complete Stories of Sherlock Holmes. Included among the 3 volumes are every short story and novel that Sir Arthur Conan Doyle wrote starring this illustrious detective. No library is complete without Sherlock Holmes on the (proverbial) shelf.

The last Third of the Arthur Conan Doyle canon was solid, just not his greatest. All in all, I think 'His Last Bow' is probably under appreciated, 'Valley of Fear' was solid, and the 'Case-book of Sherlock Holmes' seemed spotty and almost called-in. Together, however, it was a great bargan and I'm glad I stuck with this series. IT was a very elegant and efficient way to work through Sherlock Holmes.

ACD's last novel (novella?) isn't as masterful as 'The Hound of the Baskervilles' but it's still classic Doyle. It reminded me a lot of 'The Sign of Four', exept the Mormons are now replaced with the Scowrers. I'm probably repeating myself from earlier reviews of ACD's novels, but Doyle is a born writer of short fiction and his novels just don't carry the same punch or force, and seem like watered-down/diluted versions of his better stories.

My least favorite of Doyle's Sherlock Holmes story collections. Probably 3.5 stars, but all but a couple stories remind me of listening to the Rolling Stones post 2000 (appreciate the work, but it is obvious the exceptional stuff was done 20 years previous). Still here and there I found the 'Case-Book' enjoyable, the rest of the stories seemed phoned in. Doyle wasn't carving new channels here, but his craft was still formidable.

Yes, it’s an obvious way to headline a review of Sherlock Holmes stories, but it fits.

As when I completed Dumas’ entire D’Artagnan cycle, I feel I have gained a familiarity with another cultural monument, another work more honored in the breach as it were, as most people only know it in terms of shorthand or stereotype. The Three Musketeers, Holmes and Watson, Dracula, they’re all characters we know more through spoof, parody or “serious” but necessarily skewed TV and film iterations. I know because I’m not immune from this cultural disorder either.

Back in the early 80’s I sat through through the TV series Sho-Gun and for several days after was under the curious impression that I could speak Japanese. Just so, many people sincerely believe they know Holmes and Watson because they’ve seen Disney’s Great Mouse Detective. I was wrong, of course, and so are they. That’s what makes the on-the-page Holmes and Watson so fresh, surprising and utterly satisfying.

Looking back over the entire cycle of novels and stories, Holmes is far more rude and sharp with Watson than I’ve ever seen him on the screen. Watson is far more long-suffering, patient and forbearing. His devotion is truly affecting, especially through the episodes of Holmes’ opium addiction. For someone raised on the film and TV avatars, other details are illuminating. I knew Holmes never stooped to swank about in a deerstalker, but I never suspected that Inspector LaStrade is far less of a presence in the books. Nor that Holmes disapproves of Watson’s literary career. Nor that Watson tells only a fraction of the tales he could tell.

Those tales are worth listening to even when the solution turns on a device—double identities, for instance—with which Conan Doyle’s legion of literary children have long since made us familiar. They’re worth listening to because they’re simply a delight to listen to. The prose is clear and well crafted; the plots expertly constructed, the characters distinct—helped, no doubt, by Charlton Griffin’s excellent narration. In this last set you also get a glimpse of Conan Doyle’s good sense when, as he lays his last collection of adventures before the public, he expresses a fear lest Holmes appear like “one of those popular tenors” who, though they have “outlived their time, are still tempted to make repeated farewell bows to their indulgent audiences” It’s a kind of sensitivity few artists, especially musical ones, seem to possess these days.

He needn’t have worried, of course. It’s all, as the younger set say, good. We get one story told in Holmes’ own voice. We get the kind of details that will help if we ever make the cut for Jeopardy (Watson worked with Holmes for 17 of the detective’s 23 year career). There’s the question of whatever became of Watson’s wife, who he married at the end of A Study in Scarlet, way back at the very beginning. As P. G. Wodehouse observed, a writer has to be careful how he starts out in the “saga racket”; dates and details like marriages can pose awkward questions later on. Mrs. Watson lingers in the background for a while, is sometimes conveniently out of town, then is out of the picture altogether. One might have some fun with that: The Adventure of the Disappearing Wife, in which Watson murders her simply because she’s getting in the way of his quests for other murderers. But, on second thought, better not.

Out of all the pleasures of this third recording, I want to draw particular attention to a short piece called “The Adventure of the Veiled Lodger”. The pleasure is not so much in the mystery as in the story; we see Holmes acting outside his usual orbit of bloodless, rational deduction and displaying something not unlike human sympathy—a weakness he often chides Watson for possessing in too full a measure. For all his ill temper with his slower-witted friend, perhaps the doctor’s good example started rubbing off on Holmes toward the end.

The one low point is entitled, “His Last Bow” subtitled, “An epilogue of Sherlock Holmes”. Fortunately, neither moniker is true; Conan Doyle went on writing for another decade. Set at the outbreak of the First World War and told in the third person (which, after hours of the good doctor, is disconcerting), it’s a cloak-and-dagger spy-ring tale that would be far more thrilling in the hands of John Buchan. Ironically, it’s the sort of assignment—international players, nations on the brink—that Watson occasionally alludes to without giving us any details, his excuse being the sensitive nature of the case or the high-placed names involved. Then again, “The Adventure of the Bruce-Partington Plans” covers the same territory in high Conan Doyle style, without sounding like a pale imitation of Buchan. It would have been too bad if “Last Bow” really had been Holmes’ swan song.

The only other complaint is with the recording itself. The other two volumes of this series are divided into three reasonably sized chunks; this one is a single download, all 22 hours, 35 minutes and 32 seconds of it. A bit unwieldy, even in this era of iPods.

I enjoyed this series when i read the stories years ago. It was enjoyable having the story read to me by Mr Griffin. The voices were pretty good and the women were pretty much in the same voice. As to the reviewer who commented that the voices were done by older people, especially the women, They were all done by Mr Griffin!! The story was acted, not just read in a monotone as other books i have listened to.

Would you listen to The Complete Stories of Sherlock Holmes, Volume 3 again? Why?

Yes, the stories are really great and the narration is superb.

What does Charlton Griffin bring to the story that you wouldn’t experience if you just read the book?

He brings out all of the characters voices in a wonderful way, and he is a really good entertainer.

What did you love best about The Complete Stories of Sherlock Holmes, Volume 3?

The performance of the pure literature of Sir Arthur Conan Doyle and not an adaptation.

Story accuracy and attention to the original words used by the author.

Which character – as performed by Charlton Griffin – was your favorite?

If you could take any character from The Complete Stories of Sherlock Holmes, Volume 3 out to dinner, who would it be and why?

I am not sure if I would like to really meet Sherlock Holmes! He is a very arogant individual, but genuinely smart people ar e, generally, arrogany.

I really enjoy the Sherlock Holmes stories and books, so I was happy to find this available in audiobook form. The narration isn't as great as I'd like -- the narrator speaks a little too quickly for my tastes and some of his voices (particularly for female characters) sound a little distractingly silly -- but overall this is a solid compilation and I'm happy to have it. Note that while it's the "complete" stories, they're spread across three volumes, so you'll have to buy all three to have the total collection. Speaking of, I really wish the Audible application could show which track corresponds to which story (rather than just Chapter 1, Chapter 2, etc. for the whole kit and kaboodle) but that may be a technical limitation they couldn't get around.

Volume 3 consists of the novel "The Valley of Fear", and the stories in "His Last Bow" and "The Case Book of Sherlock Holmes".

A Thousand time better than the modern versions

I had no idea how beautifully written the original Sherlock Holme's stories were. They are brilliant. I found myself going back over many passages several times just to hear how he expressed things. It make me wonder what's happened to our language when I compare this writing to most modern day mysteries.
Holmes is weird to be sure. But if you love language. This reminds you of what great writing sounds like.
The narrator is brilliant!

Excellent in all things

Wonderful stories and narration! This is the best audiobook I have ever enjoyed! The reader is truly an amazing actor.

Excellent stories ruined by a narrator whose pronunciation jars so much it prevents one from enjoying the narrative. Four particularly infuriating examples from the early chapters of 'The valley of fear':

Hawlms instead of Homes, Seesell for Cecil, shawn for shone, and INkwerry instead of inQUIRy.

These come up repeatedly, and apart from Seesell, the others - especially Hawlms - will be reiterated throughout the whole book.

Please please can we have this quintessentially English book in spoken ENGLISH?