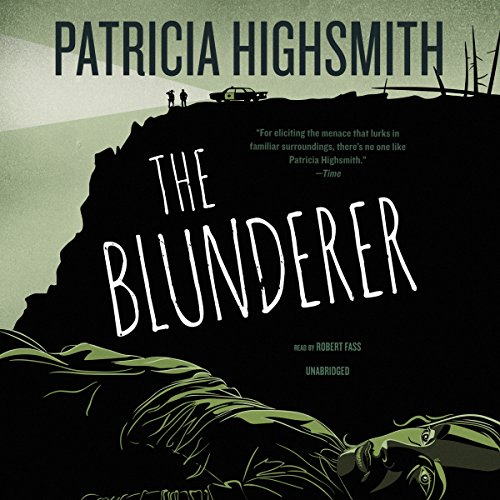 For two years, Walter Stackhouse has been a faithful and supportive husband to his wife, Clara. But she is distant and neurotic, and Walter finds himself harboring gruesome fantasies about her demise. When Clara's dead body turns up at the bottom of a cliff in a manner uncannily resembling the recent death of a woman who was murdered by her husband, Walter finds himself under intense scrutiny. He commits several blunders that claim his career and his reputation, cost him his friends, and eventually threaten his life.

The Blunderer examines the dark obsessions that lie beneath the surface of seemingly ordinary people. With unerring psychological insight, Patricia Highsmith portrays characters who cross the precarious line separating fantasy from reality.

I enjoyed this book

I found this book quite interesting. I enjoy the narrator. It is old-fashioned because of the time it was written.
I think it’s worth the listen.

A suburban version of Kafka’s TRIAL with a touch of Highsmith’s own STRANGERS ON A TRAIN. Grim & brilliant.

This narrator seemed to drone. I finally gave up. Zzzzzzzzzz. The storyline was potentially interesting. The narration was not.

I am a Patricia Highsmith fan, but this book....She has the ability to paint with words, pictures of such detail. Maybe, true to the title of the book, this was just an in-depth look and depiction of “ A Blunderer”

Even though set in the 1950’s, it still feels like present day - minus cellphones and such technology. Very well written save for the ending which seemed all crammed into a single page.

It passed the time, took me 3 weeks to finish. Was ok. Purchased it to figure out the horrific movie ending. So, got my answer, so it’s ok. I did finish it, which says something, but not much.

I really like Patricia Highsmith's novels but I was disappointed by this one. I would advise to pick another one you haven't read/ listened to over this one. It's not terrible but the storyline in my opinion isn't really believable and it kind of drags on without resolve.

Damn, but the woman could write. A quintessential psychological thriller by a master-craftswoman. Dark!

Clever but a bit overwrought.

Walter, a man fed up with his contemptuous but needy wife, decides to kill her, but is thwarted when he can’t find her. She ends up dead anyway, and Walter does a masterful job of casting suspicion on himself. Hounded by two adversaries and his own demons his life spirals out of control. Overall a good listen, although there were bits that went on a bit too long and grated.

Riveting story that keeps one guessing

I raced through this book as I was keen to find out what happened next. Twists of fate and blunders abound as the two suspected murders are hounded by a ruthless detective determined to force confessions. A gripping listen ably narrated.

The ending sort of spoiled it for me but it's a great listen anyways.
The performance was lovely.

As always with Highsmith, expertly constructed and full of acute psychological observation. But all of the characters are so unlikeable. A truly misanthropic book with an utterly depressing ending.

This is Patricia Highsmith at her darkest: all of the characters are flawed, some of them immoral; and when things start to unravel, the twists and turns ramp up the tension. What really marks this out as an exceptional listen is the performance by Robert Fass, who seems to inhabit the different characters as they speak.

although set in the 50s it feels like the turn of events could happen today. yet again Highsmith. has been able to get into the heads of her characters to wonderful effect. it was such an enjoyable read.

Now this is how you write thrillers. A brilliant and powerful story with great narration.

Got bored, deleted from library

Narration is okay but unfortunately cannot save this story. A really slow starter with annoyingly boring characters I gave up listening after a couple of hours and moved on to something a bit more exciting.

Couldn’t get into it!

I was intrigued by the opening chapter and thought I would be hooked…sadly I wasn’t. I managed to hold out until chapter 8 and then decided to call it a day.
Found it dull and depressing with unlikeable characters that I had no interest in.
Good luck if you persevere and I hope it gets better but for me it was a waste of listening time and preferred to walk in silence with traffic noise around me than have this story rattling in my ears.

the battle for justice..how easily the accused can fall to foul play. light and enjoyable

I listened because it was an audible included and it had good reviews.
It started off well and I was fairly invested in the story but it seemed to fall apart as it progressed. The ending was very quick and disappointing. I just felt it was a lot of buildup to the last 11 mins of a damp squib.