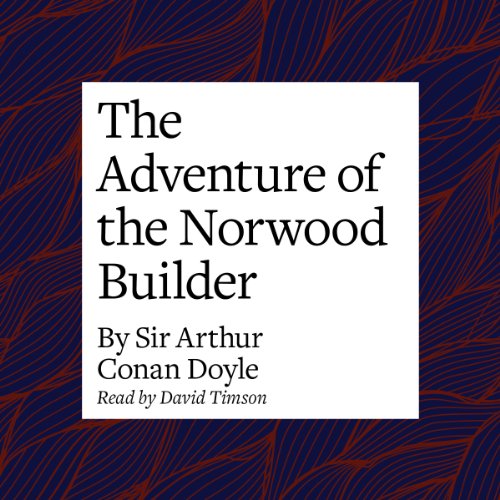 The Adventure of the Norwood Builder

This is a story from The Return of Sherlock Holmes I collection.

When Sherlock Holmes met his demise in "The Adventure of the Final Problem," published in 1893, the distress of the unsuspecting reading public was profound. For years fans showed no signs of letting Sherlock Holmes lie down and die. Eventually, Doyle saw fit to continue his Holmes' canon and wrote a series of 13 short stories, The Return of Sherlock Holmes, published in 1905.

The series begins, inevitably, with the shock re-appearance of the master detective in "The Adventure of the Empty House." This plus 3 others are included in Naxos AudioBooks' first volume of Doyle's continuation of the famous bloodhound of a genius, read by master storyteller David Timson.

Though he has been away, it seems that Holmes has lost none of his remarkable qualities.

Accused of murdering a retired bachelor, John Hector McFarlane seeks Sherlock Holmes' council. As always, Holmes proves almost magically deductive. David Timson performs the Sherlock canon as a labor of love. He knows the work so well that he has even authored his own fond pastiche, "The Wonderful Toy". With years of experience in the business, Timson smoothly switches from highbrow narration to animated character voices. His vibrant tenor, complete with British accent, embodies Dr. Watson's narrative persona. With plenty of versions of Sherlock stories on the market, Timson's productions are the best bet.