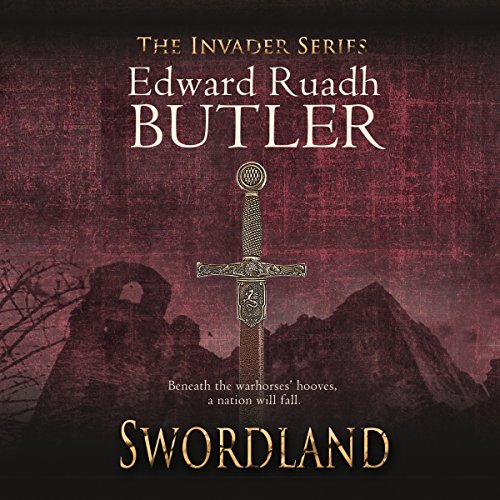 Robert FitzStephen is a warrior down on his luck. Arrogant, cold, but a brilliant soldier, FitzStephen commands a castle despite his checkered lineage. When a Welsh rebellion brings defeat and a crippling siege, FitzStephen's highborn comrades scorn him, betraying him to the enemy. A hostage of his cousin, Prince Rhys, FitzStephen is disgraced and seemingly doomed to a life of obscurity and shame.

Then King Diarmait arrives, the ambitious overlord of an Irish kingdom. Forced to flee by the High King of Ireland, he seeks to reclaim his lands by any means possible, including inviting the Normans. With nothing left to lose, FitzStephen agrees to lead the Irishman's armies and drive Diarmait's enemies from his kingdom. His price? Acceptance...or perhaps a kingdom of his own?

Fast paced and well written. Great novel about the Norman's taking up arms in Ireland.
Makes you want to have been a part of it!

I thoroughly enjoyed listening to this and will be recommending Swordland to my friends to be read as a book and listened to as an audiobook. The author has a brilliant aptitude for bringing a past world to life through his writing and the narrator brought another level of vividness to it by being able to convey the characters through their accents (i.e. Welsh, Irish, etc).