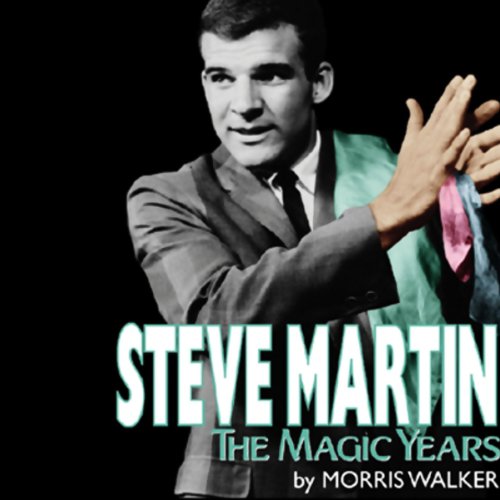 This is no ordinary celebrity biography pieced together by an outsider. Steve Martin and author Morris Walker had a close relationship growing up. They were class clowns together, charming the girls and the teachers with their wit, and eventually going on the road as comedians. This personal account will introduce you to the Steve Martin you've never seen before: the 11-year-old, already performing near-perfect sleight-of-hand magic tricks; the 13-year-old, selling guidebooks at Disneyland; the 20-year-old, stretching his comedic wings as a vaudeville-style entertainer; and the 21-year-old Emmy Award-winning Hollywood whiz kid.
©1999 Morris Walker (P)1999 Blackstone Audio Inc.

"Irony and lilt in prudent doses are required for this book full of nostalgia and preposterous youthful frolicking. Whitener finds it, with a clear, distinct voice that produces an effortless listen." (AudioFile)

I like Steve Martin, didn't see him until later in his career. I thought this book would give me a glimpse into his background. Instead it gave me a glimpse into Morris Walker. Morris kssps stating in the book how he isn't really interested in the wealth that Steve has earned but all he talks about is the amount of money Steve Martin makes.. sounds like sour grapes to me.

I think that Morris could have written a book about his young life with Steve and leave it at that, or maybe just his life and that he happened to have Steve as a childhood friend. Or even co-wrote one with Steve Martin.

After listening to this book, I wanted to know more about Morris and his wife, how they met, what they did as far as performers. That would have been much more interesting. It's obvious he loves her very much.

I guess I just don't know the reason Morris wrote this book, but I will encourage anyone to read Steve Martin's book: 'Born Standing Up'. I have really enjoyed Steve's other books here on Audible too.

Time to cash in

While the book give some glimpse into Mr. Martin's more private personality, it is a bit like watching slides of someone elses summer vacation. The storys are those of a couple of kids told by a very average writer.

The narrative thread is eliusive and the exposition so slapdash that most storys left me hearing Walker say "I guess you had to be there". I wish I could have been.

The stories reveal far more about the authors motivations than they do the subjects. I couldn't help but sense that this was Mr. Walkers payday for having the good fortune to become friends with a terrific talent, whose privacy prevented even his closest friends to get to know what was going on in Mr. Martins young mind.

I enjoyed it very much because I was at Garden Grove High School while Martin and Walker did their thing. I enjoyed 'filling in the blanks' of my memories of them. I think someone who did not have that experience might not feel the time was as well-spent as I did. But, I'd still recommend they read this book... it was entertaining.

Predictable... this is non-fiction.

What aspect of Barrett Whitener’s performance would you have changed?

Sometimes he seemed a little stiff and the words did not flow as well as I wanted.

Although the events were interesting to me because of my memories, I think Morris could have spent less time talking about Steve's success and all the money he made. That is a given and restating it over an over again gets tedious. I would have enjoyed hearing more about the antics the two of them got into. I remember one of the assemblies when they were running for 'Head Cheerleader' where they came out in a Garden Grove Varsity Sweater with two heads. That was hilarious! I'm sure there were other similar things that could have been put into the book. I also think Morris could have left out much of what he talked about regarding his own personal life.. this book was about Steve Martin after all.

Also, I couldn't help but feel that as many times as Morris talked about Steve's success and all the money he made and said how proud he was of him -- he really felt like he got left behind and was resentful of that. The more he talked about it, the more I felt that way. I feel that way because I saw Morris one day after graduation and well into Steve's successful standup career. I was in a little gallery on Main St. in Garden Grove that was owned by a mutual fried of Morris' and mine, Ron Rayl. I was a good friend of Ron's brother, Tom, and just happened to stop in to see Ron's work. Morris was there and we chatted a bit. I came away feeling like Morris was not very happy about being left in the dust of Steve's successful career.

But, as I said, I enjoyed reading it and I think most people would find it interesting even if they weren't there like I was. I do have to say that being at the Golden Bear in Huntington Beach the night Morris talked about Steve's departure out the front door and catching a ride with a stranger brought back a memory I forgot I had. Thank you for that Morris... I'll always remember the great times we had! Oh, by the way, Steve left me in the dust too! Ha Ha!

This rather unique biography was written by a childhood, and lifelong, close friend of Steve Martin. It has unique insights that I didn't expect. Interesting listen. Worth the time and money.