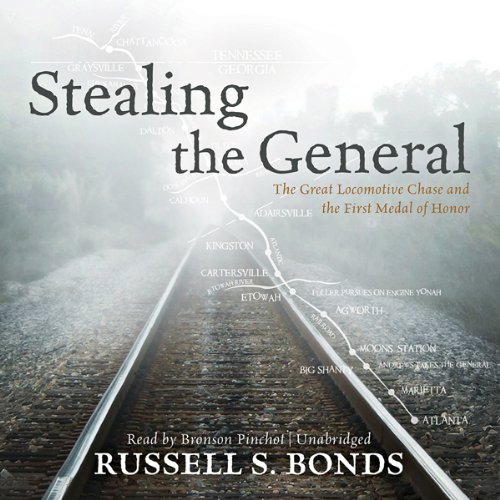 On April 12, 1862—one year to the day after Confederate guns opened on Fort Sumter and started the Civil War—a tall, mysterious smuggler and self-appointed Union spy named James J. Andrews and 19 infantry volunteers infiltrated Georgia and stole a steam engine called the General. Racing northward at speeds near 60 miles an hour, cutting telegraph lines, and destroying track along the way, Andrews planned to open East Tennessee to the Union army, cutting off men and materiel from the Confederate forces in Virginia. If they succeeded, Andrews and his raiders could change the course of the war.

But the General’s young conductor, William A. Fuller, chased the stolen train - first on foot, then by handcar, and finally aboard another engine, the Texas. He pursued the General until, running out of wood and water, Andrews and his men abandoned the doomed locomotive, ending the adventure that would soon be famous as “The Great Locomotive Chase.” But the ordeal of the soldiers involved was just beginning.

In the days that followed, the raiders were hunted down and captured. Eight were tried and executed as spies, including Andrews. Eight others made a daring escape, including two assisted by a network of slaves and Union sympathizers. For their actions, before a personal audience with President Abraham Lincoln, six of the raiders became the first men in American history to be awarded the Medal of Honor—the nation’s highest decoration for gallantry. Americans North and South, both at the time and ever since, have been astounded and fascinated by this daring raid. But until now, there has not been a complete history of the entire episode and the fates of all those involved.

Based on eyewitness accounts, as well as correspondence, diaries, military records, newspaper reports, deposition testimony, and other primary sources, Stealing the General is a blend of meticulous research and compelling narrative that is destined to become the definitive history of “the boldest adventure of the war”.

The story at the heart of Stealing the General has all the hallmarks of a timeless action tale – burgeoning wars, a hijacked locomotive, undercover spies, violent deaths – which is what has made it such a favorite of authors and filmmakers in the past. But in this new non-fiction book, author Russell S. Bonds traces the tale of the threatened train from start to finish, adding new layers to the story, while narrator Bronson Pinchot adds depth and character to the cast of real-life soldiers.

In 1862, civilian plotter James J. Andrews came up with a plan to advance the Union army's plans to take over the South: he and a team of men would hijack the General, a Southern locomotive, and use it to help the Northern army capture Chattanooga. After they took control of the train, its conductor, William Fuller, set out in pursuit of the raiders on foot and by rail in an attempt to take back the General. The pursuit had a less-than-happy ending for Andrews, but many of his men escaped and became the first recipients of the Medal of Honor.

Though the story takes several hours to really pick up steam, Pinchot keeps listeners engaged with varying inflections, plenty of personality, and dynamic tones: adding the right note of incredulity to the truly shocking parts of the plot, tossing off a slow Southern drawl when the dialogue calls for it, and effortlessly blending the story's lineup of research, quotes, and description. There are no clear heroes in a tale about the war between the states, but the narration creates a world where listeners can feel anger, sympathy, and sadness for the men on both sides of the Mason-Dixon line – all of whom thought they were doing what was right for the country. Blythe Copeland

Sometimes Facts can be more exciting then Fiction

Well researched account of James Andrews who led a group of 20 Union soldiers (or spies) into Georgia to steal a Locomotive, cut telegraph lines and generaly create havoc as they made their way north to Chatanooga Tennesee where they were to link up with the Union Army.
If things had gone as planned, this would just be another forgotten chapter in Civil War history; they did not and what we were left with was one of the most action packed tales I've heard in a long time.

As one who is deeply interested in American Civil War history, I had heard this story many times prior to Bonds's work. Well narrated, I found it hard to put this one down. The tragedy that was our "Civil" War had some bright, humorous moments, and this story captures one of them. Here's this band of Yankees daring to go deep into Rebel territory not to assassinate someone, but rather to steal a hissing, rattling, tooting, steam engine--ultimately pursued by another steamer running backwards. Outright laughter is tempered by lots of human despair, but this is a great read. It's difficult to keep all the characters clearly in place, but anyone interested in the tragedy of the Civil War needs to have this book.

Bronson Pinchot did a good job narrating this story. This is my first Russell S. Bond book. He did a good job as a historian in documenting his evidence. I chose the book because it told the story of the first Metal on Honor winner. The book also told how the Metal of Honor came about and who's ideal it was and how Winfield Scott fought against giving metals. Bond's went about correcting the historical error created by other writers and of the Hollywood movie about the story. At times the story dragged but overall it was an enjoyable read. I learned a lot about the railroads in the Civil War.

I got this book because I remember the 1956 movie as one of the most thrilling of my young life, and I wanted both to relive the experience, and to hear how close the movie was to the facts.
It turns out it was very close; in fact, from the description of the appearance and charisma of the leader James Andrews, the ever-likable Fess Parker was the perfect choice. This book, of course, goes into greater detail than the film, and corrects some errors and fills in missing facts, especially of the events after the raid, and even what became of each of the surviving raiders.
But I found the narration to be very annoying. Bronson Pinchot's voice is strong, and his diction perfect, but his intonations, his interpretation of what he was reading, was awful. He never simply reads what has been written, trusting the words to have their effect. Instead, he puts emphasis on everything he says, in my opinion, usually the wrong emphasis. And when he quotes from the writings of any of the raiders, he invariably made them sound whiny. This book needed a producer to tell him, just read the words, the power is there, you don't have to compensate.
The book, however, was strong enough to make up for the narration. I'm very glad to have relived a part of my childhood. Now if the can only do the story of Jean Lafitte.

True Story Behind My Favorite Movie

In high school I discovered Buster Keaton's 1926 silent move "The General" it is still my favorite movie. Little did I know that it was based on a true story! The Great Locomotive Chase, or Andrew's Raid occurred on April 12, 1862 in northern Georgia.

Two civilians and 22 Union soldiers (mainly from Ohio) volunteered for a mission to steal a railroad engine and destroy track and telegraph in Georgia and Tennessee. They snuck behind enemy lines, boarded the train at Marietta GA, and while the crew and passengers were off the train having breakfast at Big Shanty GA (now Kennesaw), they uncoupled the passenger cars and left. The raid might have succeeded, but an engineer from the stolen General pursued them along with others.

I loved Bond's book which includes Civil War history before and after the engine theft,the planning, the chase, details of men involved (both the 23 Yankees who stole the engine and the Confederates who followed), what happened after the war, and the place in history of the many players involved. Since many of the Union soldiers were given the first Medal of Honor, the book also provides history about that decoration for valor.

Finally, the fate of the two engines? The General is in the Confederate History and Railroad Museum in Kennesaw GA and the pursuing Texan is in the lobby of the Cyclorama Museum building in Atlanta.

An absorbing story behind the Metal of Honor.

A very interesting history of the great train heist of the Civil War, and The detail backgrounds of the people involved. Pinchot is an excellent reader. What happened to each of them long after the event, is just as interesting. This event was the reason that the Metal of Honor was created, and the politics involved explains why such a the most were actually handed out during the civil war, than any other war. It is so exclusive now. A very good, enjoyable read.

An interesting story I was not aware of

Would you listen to Stealing the General again? Why?

How did I miss the Disney movie when I was a kid? I'll be looking for it now, even though this book makes it clear that it is highly fictionalized. There are a lot of people to keep track of, but even a bit of confusion over who is who now and then doesn't detract from the story of these men sent to create havoc in the South during the US Civil War. They are to steal a locomotive and head north, taking out track and telegraph lines as they go, and eventually destroying key bridges. The story of getting deep into enemy territory alone was compelling. The theft of the train and the aftermath, including the lives of these men in post-war years, are equally interesting.

This story is one I grew up thinking I knew. Born in Marietta, raised in Adairsville, and now a resident of Kennesaw; the story of the General and Texas is one I thought I knew completely. But the myths I'd grown up hearing were not nearly as interesting as the real account of the events. What a great story and so masterfully told.

Yes, I have already recommended this bok to several others

That it is true.

I never rate books and usually read mysteries, but I remembered reading "The Great Locomotive Chase" when I was a kid and decided to listen to this. The story was unbelievable, even more so because it is true. It kept my interest throughout and was read well. The characters came alive and the sense of history was well portrayed.

We loved this book

The story was fantastic! The narration was most impressive. The narrator added emotion and suspense that he added made the book much better than it might not have been. We never knew who would live or die next.