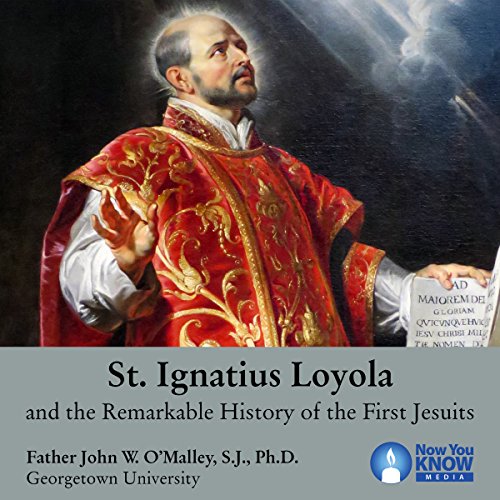 As the Society of Jesus approaches its 500th anniversary, the Jesuits make up the largest unified religious order of men in the Catholic Church. How did these "Soldiers of Christ" grow from their humble beginnings to become an order deeply engaged in ministries, learning, and society in 112 nations on all six inhabited continents?

Whether you are a Jesuit yourself or a person touched by Jesuit education, ministries, and writings, you will love this course. Fr. O'Malley, one of the world's leading Catholic historians, is at his best in these lectures. You will gain a broad, insightful overview of early Jesuit history with a special focus on the first generation of Jesuits, whose piousness has inspired countless men and women to follow in their footsteps.

The society began among the tumults of the 16th century, the dramatic age of the Renaissance and the Reformation. In the midst of this chaotic era, we find the remarkable life and vision of one inimitable man: Ignatius of Loyola. A Spanish Basque aristocrat and wounded ex-soldier, he led fellow students from the University of Paris to win papal approval for their new religious order in 1540. By the time Ignatius died in 1556, his Jesuits were 1,000 members strong and growing. They were all guided by his extraordinary Spiritual Exercises, a book drawn from his own life journey of prayer and reflection in search of God's will and blessing.

Discover the roots of one of the modern world's most influential and vibrant institutions.

A five-hour course introducing the Jesuits.

Part of what I keep returning to with my study of Ignatian Spiritual Direction is my need to fill in the holes in my understanding of some of the basics. For instance, “who are the Jesuits, and what is their history ?” I have had John O’Malley’s longer The First Jesuits and his shorter Jesuits: A History from Ignatius to the Present recommended to me. But neither of those was available on audiobook and I needed something to listen to as I was doing some busy work, so I picked up this audiobook lecture course.

At five hours it gives an overview, but it is just an overview. O’Malley is a historian and professor at Georgetown, but he is also a Jesuit. It is not that I don’t trust his opinion, but that I need to get some history from non-Jesuits as well. I have some introduction to the spiritual perspectives of Jesuits from James Martin, but I really want more history to place them in context and to see why they seem to be so loved and hated depending on who you ask.

I have read Ignatius’ autobiography and am familiar with his spiritual exercises, but this still filled in a lot of holes (and opened up plenty of awareness of holes I was previously unaware of and still need to fill.) The movement toward audiobook lectures as a whole is good. But like everything, the quality depends on who is doing the lecturing. This was neither the best nor the worst I have heard. At five hours, I think it was probably too short. But I was glad to pick it up based on the price and I will also pick up one or both of O’Malley’s books on the Jesuits relatively soon.

Hearing the voice of the master historian as he tells the story of the early Jesuits is a gift for those who have read Fr. O’Malley. For those new to the content, know that you are in the presence of one of the great Jesuit historians of our time. It reminds me of the power of story telling especially the oral traditions passed down through generations. Enjoy this journey with Fr. O’Malley as he reveals his take on the history of the early Jesuits.

happens all the time, complete expert of subjects gets side tracked by the non essential. wish author had refined subject matter and left being "bold, very bold" for professional

The Jesuits are a complex order, and their history is also complex. John O’Malley walks the listener through the world of the first Jesuits and not just St. Ignatius, the founder of the Order. This is a great lecture to get the basics on the first group of Jesuits, and how they quickly become the most influential order in the 16th and 17th centuries.

I am a product and former teacher at Jesuit schools. This was a wonderful and wide-ranging introduction to Jesuit history. Anyone who has been associated with Jesuit schools will be amazed at how the roots of our education or so clearly apparent in the early years. John O'Malley offers her accounting that need not require much background in history of the church. It's quite accessible.
My only problem with the book is the title and cover give so much prominence to Ignatius, but the book really spend so much more time on the early Jesuits. Perhaps Ignatius should be in the subtitle. Given the fact that he wrote something like 6,000 letters of Correspondence, I would have liked to have learned more about him and his particular imprints.
Nevertheless a very good read for people interested in the Jesuit history.

A wonderful overview of Ignatius Loyola and the foundation upon which to build a Christ-centered and transformative life of service to our Lord and others.

The Jesuits have influenced my life through St Louis University High. These lectures were enjoyable and educational.