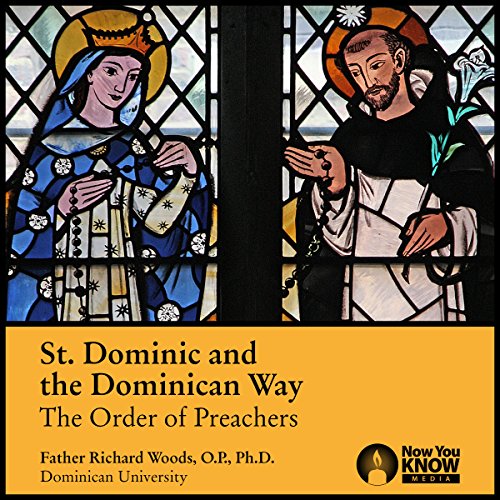 St. Dominic's Order of Preachers has given the Catholic Church, and the world, some of humanity's greatest minds.

Renowned saints, theologians, mystics, missionaries, artists, teachers, preachers, and a number of notable rascals have been part of the Order since its accidental beginnings in southern France nearly 800 years ago.

Not only is it the only order in the Church specifically founded to preach, it was the first to also replace manual labor with mental work, from the study of scripture, to the vast fields of the arts.

With scholar, author, and Dominican priest Fr. Richard Woods as your guide, you will unravel the development of the Dominican Order and the lives and work of its most influential members.

Trace the story of Saint Dominic from the beginning, and discover how he and his early followers responded to a perceived need for sound, scripture-based preaching. This free-spirited and dedicated band deliberately took a life of poverty and prayer, while overcoming the opposition of the bishops of the Fourth Lateran Council.

Follow the early spread of the Order through France, Italy, England, and later in Germany with the nuns of the order, the Sisters Preachers. Trace their accomplishments, the changes, and the intellectuals that passed through the order, such as Saint Albert the Great and Saint Thomas Aquinas. See how they survived reform movements along with movements into a "New World".

Since Dominicans inevitably involved themselves in the controversies of their times, it is not surprising that many of them landed in trouble. From Thomas Aquinas and Meister Eckhart to Pere Lagrange, Yves Congar and Edward Schillebeeckx, pioneering spirits were frequently opposed, and even condemned, only to be exonerated years or centuries after their deaths.

There were, however, truly bad "Bad Dominicans", the schemers and power brokers and even a royal assassin, who contributed to the shadowy image of Inquisitors and reactionaries that many Christians still associate with the Order.

Always changing, the Order of Preachers has adapted itself to the challenges of post-Revolutionary Europe, the anti-clericalism of the early 20th century, and the demands of evangelization associated with the Second Vatican Council.

The spiritual heritage, intellectual tradition, and the missionary impulse that sparked the birth and growth of the Order still remain in the lives of the brothers and sisters who continue to preach, teach, and serve wherever they are sent.