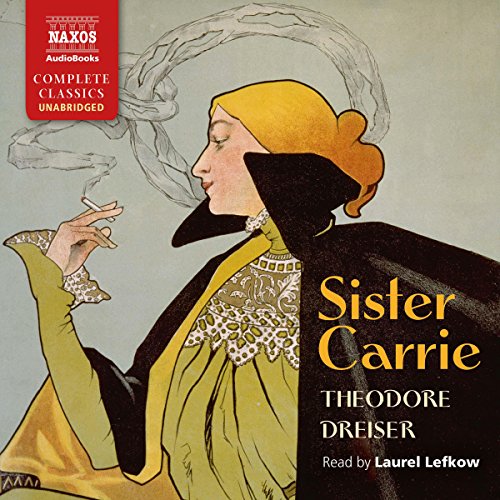 A magnificent portrayal of 1890's America and the harsh realities of a dog-eat-dog world, Sister Carrie lies at the forefront of American Naturalism. When poor young provincial woman Carrie Meeber arrives in Chicago, she little expects to be catapulted from lower-class woman to prominent Broadway actress. Passive and yielding, she lets circumstances coerce her into action and by good fortune she arrives at fame.

It is in Chicago that Carrie meets a successful businessman, Hurstwood, who helps her establish her name. Gripped by a strong attraction to Carrie, Hurstwood ends his marriage and moves with her to New York. Their relationship soon ends and, like a fish out of water, Hurstwood finds himself vagrant and destitute on the streets of an unfamiliar city, a poignant counterpoint to Carrie’s rapid rise. Frank, evocative and compelling, Sister Carrie gives us a version of the American dream with a gritty and unattractive reality.

Sister Carrie has been on my to read list for a while and the audio version was the way I could manage it. The performance by Laurel Lefkow is stellar, the evolution of the character is developed with the vocals. The writing of Dreiser makes it the American Classic that we know it to be.

Without meaning to give short shrift to "An American Tragedy," Sister Carrie is Theodore Dreiser's best work. Inclined towards telling stories of uniquely American aspiration, Dreiser casts a dim eye on those who may become consumed by their desire to improve their station.

Set in 1880s Chicago and New York, Sister Carrie tells the story of a Midwestern teenage country girl who fled the claustrophobia of a small town Anericana for the big city. With no real skills she discovers opportunities for work in Chicago limited. But, being exceedingly pretty and not disinclined towards the interests and affections of a young, ladder climbing salesman, she accepts his overtures and the access it brings to a better class of gentleman.

Discovering a natural flare for theatrics garners her more attention for better placed men which carries her to New York where she catches a rising star as her absconding paramour spirals into decline as her celebrity becomes meteoric into the Roaring '90s.

Though not explicitly stated, Dreiser gives insight into the flexible morality of Americans at the Turn of the 20,the Century. He shows how, despite the moral strictures of the preceding Victorian Era, young Americans couldn't wiggle out of their corsets and waist coats fast enough in the quest of a good time and better life. And, having recently suffered through a number of insufferable works by Dreiser's contemporary Henry James, no better storyteller of the era could be digested on par with Theodore Dreiser.

I love this book and have read it several times. The narrator really captures Carrie's innocence and how naïve she is, while also catching the pathos of Hurstwood and the easy going charm of Drouet. Cannot recommend enough.

I’m not sure why I chose this title, but I am glad that I did. I found the story engaging and the characters very colorful. I listen while I walk my dog, and I found that I wanted to go on more walks just to listen to the story. Good narration, which always helps.

It might have been five star but for “An American Tragedy” beside which this story suffers a little in comparison.

I have read this book several times in the last 30 years--undergrad, grad school and for pleasure ( protip: do not assign a 600-page book for a casual book club unless you are prepared to recap the story and detail its many merits for the entire session). No story is more truly and tragically American. Nothing about the production or narration bothered me (which may not seem like a ringing endorsement, but a narrator who doesn't get in the way of the story is absolutely essential to my enjoyment and recommendation.

The audio is 4 db too low

It's awful because in my Lexus, I have it up to 45 to listen to this poorly mixed audio. The average volume for any audio book is normally in the 32 range.

I'm not a huge fan of Laurel's voicing of Sister Carrie. This is a director problem, not hers. I would not have her constantly playing Carrie as very muted and dull. I would have her play it almost like her own voice. More strong. Because she's the central character you have to pick the right tone and it wasn't the right one. But her other annunciations were perfect.