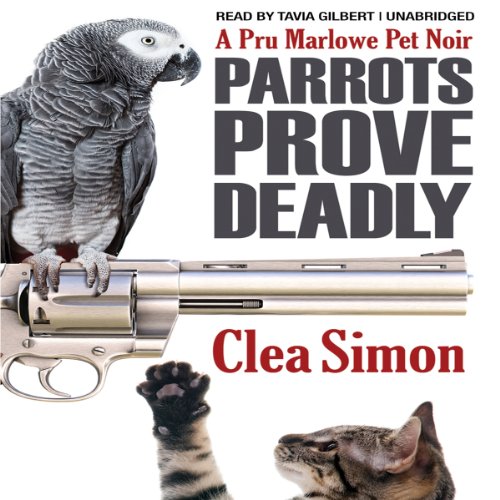 Parrots will repeat anything. They don’t talk sense—or do they? When Pru Marlowe is called in to retrain a foulmouthed African gray after its owner’s death, she can’t help hearing the parrot’s words as a replay of a murder scene. But the doctor on call scoffs at the idea, and the heirs just want their late mother’s pet to stop cursing.

The only other possible witnesses being an evasive aide, a blind neighbor, and a single-minded service dog, Pru is stuck with what may be a featherbrained theory. Even her crotchety tabby Wallis doesn’t buy it, although Wallis would be more than willing to “interrogate” the bird up close.

Meanwhile, Pru, the bad-girl animal psychic, is also called on to deal with drugs, jealousy, and a potential rabies outbreak.

Pru and four-footed friends are back

Pru Marlowe is still adjusting to being back in her little hometown of Beauville in western Massachusetts, and working to establish her business of walking dogs and working with dogs and other animals as a behaviorist. She doesn't have her degree, yet; she had to cut short her education and get out of New York City for the same reason she has a slight edge over the average animal care professional.

She can communicate with animals mind to mind, sometimes even when she doesn't want to.

Her latest adventure starts when she gets a frantic phone call asking her to come help fix the behavior of a foul-mouthed African Grey Parrot. Randolph's human, the mother of the woman who called Pru, has died, and there is no one willing to take in the bird if his vocabulary doesn't get cleaned up.

Much of what he says seems to indicate that his person, Polly, was getting angry with people she believed were taking her things. Then he livens things further by making the sound of the elderly woman's walker being thrown to the ground.

Pru soon dealing with the dead woman's wishy-washy daughter who has provided most of her care, and her son, who has left the work to his sister but has very decided ideas about How Things Will Be Handled. Meanwhile, she's also handling a small matter of a raccoon trapped near, or in, a new condo development on the edge of town. Albert, the town's animal control officer has trapped it at the request of the condo manager, but has had to do so twice because the first time he didn't move it far enough before releasing it. Now the manager wants the animal destroyed, and Albert is asking Pru for help.

It's not long before Pru realizes there's something very odd going on at the LiveWell assisted living facility where Polly lived, and a little longer before she realizes there's also something odd about the new and not yet inhabited condo development.

It's a bit longer, even with help from her often snide cat Wallis, her grumpy walking client the bichon Growler, the worried and insistent Randolph, and even the raccoon, before she realizes the problems are connected. Being the stubborn, distrustful, ex-bad girl that she is, Pru doesn't really listen to the warnings and indirect information that her boyfriend, Beauville police detective Jim Crichton, is giving her about how dangerous are the things that are going on.

There are times I want to shake Pru and tell her to stop being a pig-headed idiot, but mostly she's an intelligent and resourceful woman, and she is nothing if not devoted to the welfare of her friends, both human and non-human--even if there are more of the non-human kind!

I bought this book.

This is the third book in this series. I have become fond of Pru and her cat. Three stars is really too generous but two seemed a little too harsh. The narrator does a great job with the various characters but it is hard to enjoy some of these characters. Her whiny version of Jane - the parrot's current owner, and the parrot itself, do get tiresome. I stopped this book for a while in the middle because it wasn't holding my interest (I eventually finished). Part of that has to do with the fact that I am not as interested in parrots as in cats or even dogs. If you aren't already a fan of this series, I wouldn't start here. Not a whole lot happens in this one. Pru doesn't even show as much personality as she has in previous installments. I guess this is her softer side. On the one hand, she was less pushy in her investigations and didn't do those things that made me cringe in earlier books like showing up at funerals to ask obnoxious questions. Her cat even accuses her of having become domestic. I'm not sure that's a good thing. I'm not in a hurry to go on to book 4.

PARROTS ARE PERFECT FOR MYSTERY'S

If you could sum up Parrots Prove Deadly in three words, what would they be?

I absolutely loved this book. I got it because it included a parrot.(I'm a parrot parent) Now I'mm listen to all her books! Better give this one a try if you haven't!

What other book might you compare Parrots Prove Deadly to and why?

The Meg Langslow Series by Donna Andrews as she uses birds as characters in her mysteries, too!

She is wonderful with all the quirky voices she had to cover and even animals! LOL