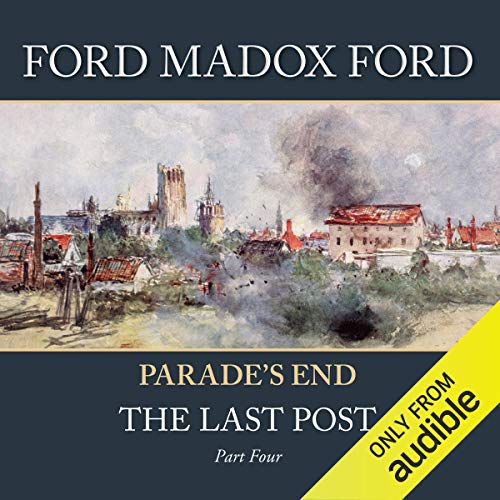 The Last Post, the fourth and final volume of Parade's End, is set on a single post-war summer's day. Valentine Wannop and Christopher Tietjens share a cottage in Sussex with Tietjens' brother and sister-in-law. Through their differing perspectives, Ford explores the tensions between his characters in a changing world, haunted by the experience of war, facing an insecure future for themselves and for England. The Tietjens' ancestral home has been let to an American, its great tree felled: those like Tietjens who have served in the war find there is no place for them in a demoralised civilian society. The celebrations of Armistice Day have been replaced by the uncertainties of peacetime. 'How are we to live?' asks Valentine, as a death and an imminent birth bring Ford's great sequence to a close.

John Telfer makes a complex piece of writing so easy to follow. Just try reading out loud one of the conversations from this book to appreciate what is involved. The range of accents is very wide.

If you can sit for 36 hours (the complete tetralogy)

puts Ford up with the best writers of his generation

This was hard and sometimes frustrating to listen to as it is almost entirely a set of internal monologues. These deliver the plot in random parcels rather than carrying it along. This fourth book in the tetralogy hardly features Christopher Tietjens, the main character of the previous three books.

The book presents the social and historical dissonance of the Tietjens brothers. The internal monologue of Mark Tietjens, who is rendered mute and immobile either by a stroke or an unwillingness to accept the nature of post-war England, represents an almost autistic view of England in the 1920s.

The tone of the book is plaintive and it is full of both pain and insight, though the later must be mined with some effort.

Do not even think of reading Last Post if you have not read the other three books.