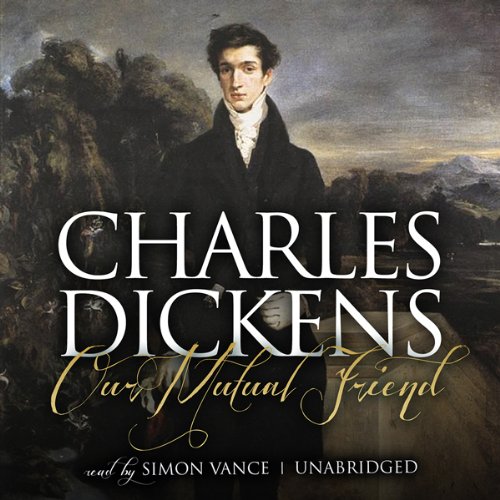 A sinister masterpiece, Our Mutual Friend was Dickens' last completed novel. It is perhaps his ultimate vision of a dark, macabre London and the corrupting power of money.

Opening with a father and daughter scavenging for corpses on the Thames, the chilling tale unfolds around drownings, disguises and doubles, violence, murder, and triumphant love. Young John Harmon, presumed killed on his return home to England, is very much alive. The heir to a dust merchant's fortune, he goes to work under an assumed name for his father's current heirs, the amiable, elderly Boffins, who are about to be blackmailed by the unscrupulous one-legged Wegg.

So begins the intrigue in a novel that is quintessentially Dickensian in flavor, in its grotesque caricatures, its rich symbolism, and the astonishing realism of its heroine, Bella Wilfer, among Dickens' most splendid female characters.

What I enjoy most about Dickens is the quality of his writing. And this book, to me, is his best. It seems like Dickens managed to squeeze every character he ever came up with into this book, and I loved each and every one of them. And the narrator -- well, if you haven't heard anything performed by Robert Whitfield (whose real name is Simon Vance), just get this book. By far my favorite narrator, reading Dickens at his best. Who could ask for more?

For my money, Our Mutual Friend is the best novel Dickens ever wrote--a bit darker than the others, but all the more powerful. Although it presents the usual cast of caricatures, there are no throwaways, the themes they represent are not trivial. Dickens (sorry, no apostrophe function) attacks on snobbery and greed are unusually vicious as well as funny, and there is a new depth to the main characters--especially in the darker romance (there are two). Lizzie Hexam is a breathtaking character--serious, beautiful, redemptive. Dickens sentimentalism (to my mind the serious flaw in his works) is kept to a minimum in this one.

And--The reading is perfect. Robert Whitfield is a talented and sensitive reader. I will be looking for more of his work.

In this audiobook, Charles Dickens and Robert Whitfield (the narrator) mutually conspire to deliver audio pleasure to the listener. Superbly written and read, the Thames winds through this tale of class difference, greed, social frippery, mystery, murder, financial skullduggery and love. Do yourself a great favour and listen to it. You'll love it.

This is a great story whether read, listened to, or watched on BBC version. I have done all three and never tire of the story. The characters are at times caricatures (as always in Dickens), but always bring to mind people we have known. Reading Dickens is like reading a manual on human nature and foibles. This is one of the author's best works, in my opinion. You will love and hate these characters.
The narration is superb and well-fitted for this book.

Right up there with "A Tale of Two Cities"

This was Dickens' last finished novel, and he was at the height of his powers. The plot deals with the death of an heir to a fortune, and the effects of this fortune being settled upon a working-class couple. Along the way we have a couple of love stories, greed, jealousy, mistaken identity and murder. The threads of the plot are woven together beautifully and the characters are very much alive. I didn't want the book to end.

Simon Vance, as usual, does a superb job with the narration. His reading of the characters brings them to marvelous life. There is plenty of humor in the book, and Vance presents it with exactly the right touch of dryness. And his reading of the darker parts of the novel is extremely effective and affecting. I think this is one of his best narrations.

On to the next Dickens/Vance audiobook! Perhaps "Little Dorrit."

Worth every penny. Robert Whitfield is an excellent narrator. Tip: Always listen to the sample.

This is a wonderful reading of Charles Dickens's last and greatest finished work -- truly an extraordinary performance by Simon Vance.

What made the experience of listening to Our Mutual Friend the most enjoyable?

Simon Vance emotes really well. And his voice is amazing.

I have listened to half a dozen narrators across the various Dickens' audio books. Nobody comes close to Simon Vance.

Our Mutual Friend is vintage Dickens with subplots, intense character development, and wordy. While the main plot lines converge at the end of the book, there are some plot lines that ramble on without a real tie in to the main lines. Having read or listened to all of the novels, I certainly was not surprised by the pace. I would strongly recommend this Audible version because the reader is supurb.

I downloaded this only because it was on sale and I was out of novels and credits; I had developed dislike for Dickens, probably due to too much time spent as a student and teacher on Oliver Twist and Great Expectations, but I fell in love with Dickens again by hour two of "Our Mutual Friend." Great narration adds to his delightful description, humour, and irony; Whitfield/Vance navigates the prose so that it flows like music and makes the unique characters (and caricatures) live. A couple of the clever conversation exchanges between Eugene and Mortimer are worthy of Shakespeare. And of course, there are occasional scenes of pathos among the innocent poor (Dickens could overdo it), but sentimentalism is minimal compared to other of his tales. Dickens also redeems himself a bit from earlier anti-Semitism with sympathetic Jewish characters. All and all, this is a delightful listen from start to finish.

There is a tiny editing problem--at least a dozen times a sentence or phrase is repeated--but that detracts little from the overall listen.

Dickens is in his usual form with great characters who are recognisable in every age. Here he deals with wealth and poverty and introduces us to people of every layer of society who are greedy for money and others who are generous and kind.

He shows us that for some wealth can ruin their character whilst others thrive in relative poverty.

His text could well the "The love of money is the root of all evil."

The characters are brought to live by Simon Vance's wonderful reading of the story. Each character is distinct and clear.

Sadly the recording is ruined by dreadful editing. In pretty well every chapter, and often several times in a chapter, lines are repeated as the reader gives a second rendition of the same phrase. In one case a whole chapter is repeated.

This failing is a surprise at first, becomes a frustration and by the end of the book is a genuine annoyance.

It's a pity that the editing of this audiobook is so poor, the narrator frequently re-reads phrases and both versions are kept in - so you keep hearing double! It's sometimes entertaining to get a glimpse of the craft involved in audio narration, but mostly it distracts you from the narrative. I can't think of any other medium where this would be acceptable, imagine watching a movie where the outtakes are left in! Otherwise this is a great story, but I love Dickens in any form. I enjoyed Simon Vance's narration but found it a bit one-dimensional, he has a supercilious tone to his voice all the time which, with Dickens' long sentences, can be a bit irritating. (Anton Lesser's narration cannot be matched - please do more Mr Lesser!)

If you could sum up Our Mutual Friend in three words, what would they be?

What other book might you compare Our Mutual Friend to, and why?

Most novels by Dickens - Dickens's books are incredibly good at examining society of the time and pointing out the flaws, inconsistencies and two-facedness of it. This does of course mean that the villains are more villainous and the heroes more heroic than one would expect in reality, but part of the novelist's role is to shine a spotlight on these things, necessarily making them stand out more brightly.I have a particular joy at Dickens's onomatopoeic character names, they're marvellous throughout his books!

Vance is a truly admirable reader. His characterisations are brilliant, and maintained throughout (I loved his voice for Silas Wegg, so fitting!). I actually logged in to Audible just now in order to identify more books he has read!

No - I need sleep; it's a little long for that! However, I did manage a few long sessions with it. I believe the original was published monthly in nineteen parts. It would be interesting to know where the original breaks were, in order to attempt listening to the novel again in those same parts.

More care could have been taken with the editing. There are several places where Vance has re-read a line but the editing (or lack thereof) has left both reads in the final audio.

I enjoy listening to this book so, it reminded me of when I was little. thank you so much.

Is it only me who has been living in ignorance or is this book vastly underrated? I thought I knew of all Dickens' great young characters, but I had never come across Jenny Wren, the doll's dressmaker, and she's far more interesting and well-developed than many of the better-known ones. A great book, enhanced by an excellent reader.

I had forgotten the strong sense of social justice in Dickens's works. We can listen to Dickens today and still be moved. Simon Vance has a pleasing voice and is a superb narrator.

The only criticism I would make is about the editing! Sentences repeated (presumably where the reader takes a break) and very abrupt chapter endings. Otherwise, this is a great Dickens novel and well read.

This recording has not been edited properly. Simon Vance, who is a very good reader, has corrected himself at times and both the original recording and the corrected version are left in, so that you hear both. It is interesting but annoying, and the faulty editing should have been picked up.
As to the novel, it is not one of Dickens’ best. In order to convey to the reader the real identity of his hero, he has a chapter in which the hero talks to himself about his past, which feels rather clumsy.

Not everyone's cup of tea, but Our Mutual Friend is one of my very favourites of Dickens's novels. I forgive it's rambling lack of cohesion for its atmosphere. Jarvis captures that atmosphere wonderfully.

So enjoyed listening to this. Knew the story and the reader read the characters so well. Very funny in the places where it is meant to be funny. Recommend.