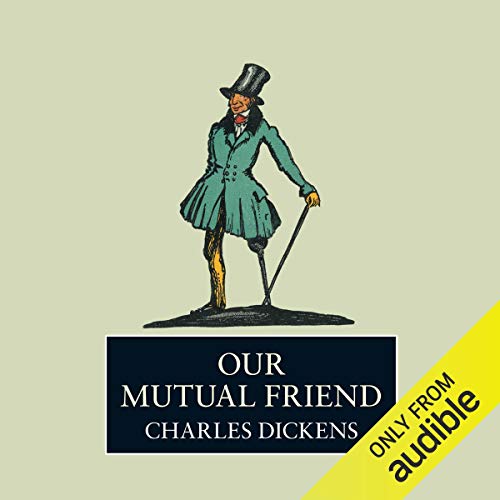 John Harmon, in exile for many years, discovers that by a curious quirk in his father’s will he must marry Bella Wilfer, a girl he has never met, in order to claim his inheritance. Mistakenly thought to have drowned, on his return he gains employment with the kindly Mr Boffin under the assumed name of John Rokesmith and falls in love with the flighty and mercenary Bella, who scornfully rejects him as a mere impoverished secretary. But Boffin and his wife contrive a plan to help John and show Bella the error of her ways.

What a wonderful story.

I am a big Dickens fan. And this incredibly well narrated version of Our Mutual Friend does not disappoint.

I always enjoy Dickens such a refreshing change to modern literature. Wonderful characters, such gentle supple humour, great stories, tragedy and romance. It's all there, love it.
This long tome is no exception , well read, it holds the interest throughout.

What a brilliant reading of the many and complex characters created herein by the inestimable Mr Dickens whose legend lives on, brought vividly to life by the talent of Mr Troughton. Not simply a fascinating historical insight but people and traits we come across everyday are detailed wittily and observantly, sometimes painfully, the whole rolling along in this rich story, I could hardly have enjoyed it more, and will buy more Dickens from Audible to brighten my days.

Another Wonderful Story from Dickens

Where does Our Mutual Friend rank among all the audiobooks you’ve listened to so far?

when you've listened to thousands, as I have, I can only say that Dickens and Trollope always appear at the top of my list.

too long for that, but nothing wrong with enjoying it for as many hours as possible in one go.

What did you like most about Our Mutual Friend?

An outstanding actor, able to switch effortlessly between characters in an unobtrusive way

Good, but not, for me, great

Firstly, I have to say that this is definitely one of my favourite Dickens. For most of the book at least, both the leading young women, Lizzie Hexham and Bella Wilfer, are strong characters. Unfortunately towards the end, Bella slips into a more traditional Dickens role, as per Dora and Little Nell. More normally for Dickens, he finds his most upright male characters in a wide variety of interesting places and, more specifically, offers a welcome contrast to the anti-semitism that readers have associated with his drawing of Fagin in Oliver Twist.

The reading is very professional, faltering only, in my personal view, when Dickens uses irony to convey his discust for the character he is drawing - the reading of his introductions to Lammle and Wegg being examples.

I have enjoyed this, but I could have been thrilled.

Another classic from a great writer.

Dickens , as always, is well worth listening to. Not the easiest to follow all the characters and occasionally predictable but a master writer. What more can be said.

What a great narrator. I had never read the book although I had seen the series many many years ago and enjoyed it. It was a marathon read but the characters were all well defined an recognisable.

One of the best moves by Dickens, it is an attack upon the pursuit of money and class barriers. The structure is rather unwieldy, but it contains mystery, romance, well depicted characters - and humour!
The narration by David Troughton is outstamding. Dickens is a supreme challenge, but Troughton meets it with consummate skill!

I adored listening to this. Lovely, lovely, lovely! Thank you - so life-enhancing! Ellie Whyte.

This one is VERY peculiar

What did you like most about Our Mutual Friend?

Oh I loved the comic-strip way it bulldozed from sentimentality to violence and from outrage and sarcasm to saintly old people.It really is a prototype detective thriller wrapped in a comic.

The Doll's Dressmaker. A minor character but so intriguing, she could have been a novel in herself.

O, that would be a spoiler!

Not a moment so much as Dickens's absolute fury at the workhouse system, and the horror of death in the workhouse for somewhere with nowhere else to turn.

It must be at least thirty years since I last read this and I was very intrigued by the peculiarity of the father - daughter relations between Bella and Mr Wilfer and The Doll's Dressmaker and her drunken dad.
Once again I was entranced by the reading itself. I think David Troughton deserves an award for his reading of this, including the way his it gave me patience with the arrant sentimentality Dickens sometimes veers into.