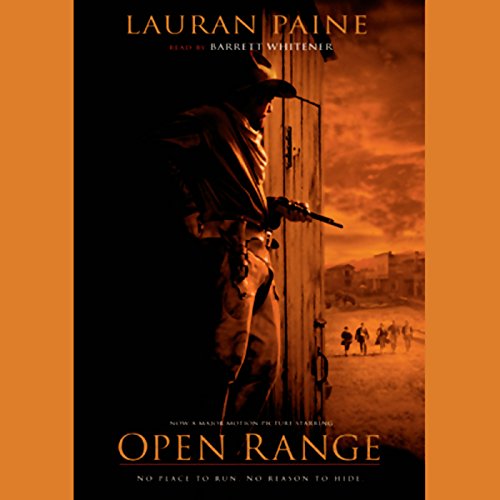 The open range men are free-grazing cattlemen, those who don't own land but drive their stock through the country to graze. Boss Spearman knows that times are changing. Local ranchers are staking claims to grazing areas and building up extensive cattle empires. Boss has no quarrel with that, but he won't be intimidated or scared off. So when Denton Baxter makes it clear, by killing one man and seriously wounding another, that he intends to drive Boss and his crew out, Boss must make a stand. But getting justice is not going to be easy. Baxter practically owns Marshall Poole, and the townsfolk have no use for free grazers. Boss' only hope is the circuit-riding judge, if he can stay alive until he arrives.

"[Lauran Paine is] the best in the business." (Kirkus Reviews)
"A gripping tale of human greed and the fight for survival...superbly narrated by Barrett Whitener." (Library Bookwatch)

What made the experience of listening to Open Range the most enjoyable?

Sue Barlow, she is an inspiration to the Open Rangers. She is beautiful and dedicated to doing good.

What does Barrett Whitener bring to the story that you wouldn’t experience if you just read the book?

He has a lot a emotion in his voice.

If you could take any character from Open Range out to dinner, who would it be and why?

Sue Barlow, she is an interesting person.

A must listen for Cowboy or Western book lovers.

Not bad, not great

This is a rare case where the book is not better than the film. If you enjoyed the film (which I did), you might still like the book, but be warned that the book is quite different in a couple of major ways. It's a very slow moving story (in the book), and it doesn't help in this case that the narrator reads it at a slow, deliberate pace. It's a matter of taste, I know, but I did not care for the narrator of this title. Some of the voices he affected for a few characters were downright annoying. Fortunately, he does not adopt such voices for any of the primary characters. Not a waste of time, but not as good as I had hoped, based on the movie.

I didn't make it through it all

I am very disappointed in this book. The story is not much like the movie. I figured it would be close, if not better than the film, but not so.

This unvarnished western drama held me enthralled throughout. The conflict between the "free-grazers" and the "ranchers" of the late 19th C. has been often told but never with such flair. The interpersonal relationships drive the plot, but the beautiful narrative binds it all together. Not overly sentimental.

Much better than the movie (which was excellent).

I wish I had read the book before seeing the move with Duvall and Costner. I think the added context as well as the differences would have made both better for me.

I enjoyed the writing and the performance was really good. characters were easy to accept and the description put you right in thetrail herd. I'll look for more stories from this author. And more books performed by the person that did this one. the performance makes or breaks the novel. Nicely done.

Good as any Western I have ever read- and I have read many!

I have only read Louis L’Amour books until reading this one and I have to say Open Range is as good as any Mr. L’Amour wrote! It is a easy Five Star book!