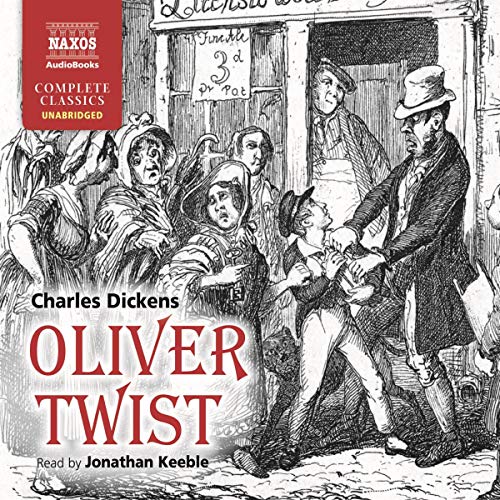 Oliver Twist, Dickens’ second novel, has enthralled generations of readers since its publication in 1838. Orphaned and desolate, Oliver’s journey to London and subsequent induction into its dingy underworld, is here narrated with ceaseless energy by Jonathan Keeble. His depictions of Fagin and the terrifying Bill Sikes are particularly mesmerizing, and his reading is infused with a delicious knack for storytelling.

This unabridged version has been long anticipated, and is a stand-out Naxos AudioBooks recording.

Oliver Twist is quintessential Dickens: melodramatic; some memorable characters and scenes; some utterly brilliant prose passages; some utterly cloying sentimentality. Great sympathy for the oppressed. It's a great novel (though not as great as his later masterpieces). The portrait of Fagin is brilliantly done but somewhat spoiled by a strong whiff of anti-semitism. (Dickens responded to this criticism by creating a thoroughly admirable Jewish character in Our Mutual Friend, one of his last novels.) Some of the coincidences the plot relies on are pretty implausible, but that's just the genre. Jonathan Keeble, the narrator is simply perfect, both with narrating and with the various voices and accents. I simply cannot imagine how the novel could be read aloud any better.

The archaic language of Dickens demands to be read with a stiff accent and strong diction. Mr Keeble performs these two characteristics admirably. However, the character voices leave something to be desired. They shift and change throughout the book and even within the course of a single conversation. The lack of continuity can at times be distracting and leave the listener wondering who's talking. In spite of this, still an overall strong performance for Dickens fans and better than many of the other options on Audible.

Where does Oliver Twist rank among all the audiobooks you’ve listened to so far?

Readers familiar with Dickens' work have learned to expect a somewhat circuitous plot and a loquacious narrator. That said, Oliver Twist deserves its wide appeal among readers of Victorian novels.

Have you listened to any of Jonathan Keeble’s other performances before? How does this one compare?

A very capable narrator keeps this lengthy narrative and its abrupt shifts in plot clear for the listener. Dialogue is aptly dramatized, enhancing Dickens' character development and keeping the story lively. Despite the length of this novel, I found myself always eager to return to Keebler's performance.

I was of three minds,
Like a tree
In which there are three blackbirds.

-Wallace Stevens
“Thirteen Ways of Looking at a Blackbird”

Whenever I try to explain my attitude vis a vis Charles Dickens that bit of Stevens occurs to me, though there are only two blackbirds in my tree.

The first can’t get enough of the way Dickens summons up at will characters that live and breathe, on the page and in the memory—even the ancillary ones like Mr. Grimwig and Mr. Giles. His storylines that keep one in agonies of suspense—leaving Oliver wounded and unconscious in a ditch for two chapters, for example—make us grateful that, unlike his first readers, we aren’t compelled to wait a month for the next installment. And his full-bodied humor, the sheer, good-natured fun he pokes at all of us, his heroes as well as his villains.

The other blackbird is more dubious. In the course of the story, Dickens makes it perfectly clear that Mr. Bumble is a pompous bully, that the parochial system is corrupt, and that Rose is a saint. The problem is, he can’t let well enough alone. In passages that usually begin with a heartfelt “Oh!” he admonishes the reader to imagine a world where Mr. Bumble wasn’t such a bully and where everyone was more like Rose, shattering the first commandment of storytelling—show, don’t tell—and, instead, doing both. But he’s so good at the first (see the powerful scene between Sikes and the itinerant peddler) that he need not have bothered with the second.

However, as a general rule, I believe it unfair to ding books for being a product of their times. Here—though Dickens was reportedly stunned when people pointed it out to him—the antisemitic portrayal of Fagin stands as exhibit A. Exhibit B: the unspeakable perfection of Rose (she diffuses peace and happiness to all around her like a free-sample lady at a perfume counter). Exhibit C: characters saying things that would sound far more believable as interior thoughts (everyone, from Rose to the blighted Nancy, become unbelievably prolix when describing their emotions). And exhibit D, those glutinous “telling” passages where, as in exhibits A through C, Dickens played to the tastes of his times even as he shaped them. Nevertheless, that second blackbird has a point.

And, now that I think of it, a third blackbird does roost in that tree after all. This one thinks that Jonathan Keeble turns in a spectacular performance, utterly faithful to the spirit of the book.

Not what you remember

In keeping with the other Dickens novels, this is superbly written, but I almost skipped it, thinking the story was oh so familiar. Maybe it should have been obvious to me, but this is quite different from the popularly depicted version. It is well worth listening to.

Dickens would be proud. Here's eleven more word for ya governa' and right smart ones too

One of those enlightening narrative performances that can only enhance your appreciation of a true literary classic. Can't recommend this highly enough.

What made the experience of listening to Oliver Twist the most enjoyable?

Mr. Grimwig, because he wanted to be right about everything, and yet, he admitted that he was not right.

Which character – as performed by Jonathan Keeble – was your favorite?

I like this book because of it's juxtapostion, it had ice and warmth, it had kindness and hatefulness, it made you want to strike Mr. Bumble while at the same time shake the hands of Mr. Brownlow and Mr. Grimwig.

This book is the perfect story for someone who wants to clap an oncore one moment and reach through the screen and slap - a few people - the next. I highly recommend this Audio Book both for content and the reader who was able to bring the characters and words alive as well as anyone I could imagine.

Writer and narrator together weave a spell

Mr. Keeble is an amazing narrator, and of course Mr. Dickens is an eloquent writer who can bring people and scenes to life in a most vivid way. The combination of these two is magic!

Would you consider the audio edition of Oliver Twist to be better than the print version?

Yes - Jonathan Keeble is amazing, and brings every character to life.

What was one of the most memorable moments of Oliver Twist?

The introduction of Fagin - evil or good? The characterisation is wonderful

What does Jonathan Keeble bring to the story that you wouldn’t experience if you had only read the book?

Every character is read differently (even Fagin's boys)

Jonathan Keeble's performance is one of the best I have heard on Audible. Truly excellent!

Chickens is as ever a pleasure read with exceeding talent by Mr Keeble. Many thanks

very long but worth it in the end with some great

Classic never get tried of listing, Jonathan Keeble narrates this book which only enhanced the pleasure when the narrator is easy to listen to.

Finally did this book!

I've been meaning to read this in English for the longest time and never managed to get to it. Till I saw Jonathan Keeble narrates it! Problem solved in an instant. I love this guy! And I must say I quite enjoyed Dickens' sense of humour!
Listen to it and you'll definitely enjoy all the talent Jonathan Keeble has or I will eat my head!

The narration in this version is superb. All of the characters are brought to life in an engaging way. Highly recommended.

A Narration I'd Keep Going Back To

What did you like most about Oliver Twist?
Dickens's characters were perfectly created, good and bad.

What did you like best about this story?
When Sikes murdered Nancy - I've never heard a more perfect reading of it.

What does Jonathan Keeble bring to the story that you wouldn’t experience if you had only read the book?
He handles each character perfectly.

Did you have an emotional reaction to this book? Did it make you laugh or cry?
I was close to tears when Mrs. Maylie broke down when Rose was dangerously ill.

Any additional comments?
You'll never get a more perfect reading of the book than this. Without giving too much away, Chapter 52 was perfectly narrated, as was Chapter 49. You could tell Mr. Brownlow was a determined man. Jonathan Keeble was perfect as Monks too. I'll give nothing more away, but if you haven't read any Dickens books, both this and Great Expectations are the perfect first starting point for you. If you've only seen the musical, then you'll find a great difference. Good though the musical is, quite a lot is softened in it whereas this shows the brutality during the time it was written.

Another great book from Dickens. its the first time I have listened to the book and it is better than then the different films that have been made.