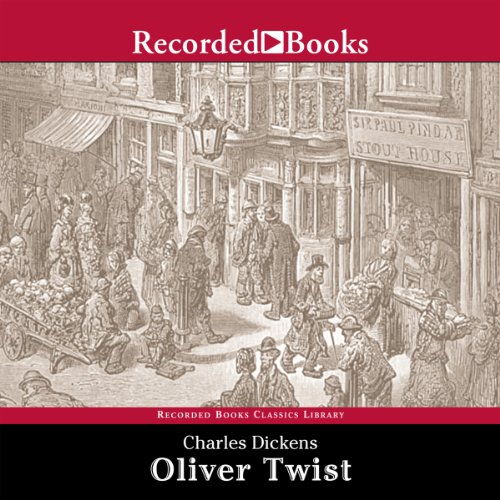 Richly complex, darkly comical, and irresistibly charming. Charles Dickens' Oliver Twist is one of the greatest novels of the 19th century, from one of literature's most esteemed craftsmen. Published serially between 1837 and 1839, it secured Dickens' reputation as a writer of exceptional skill and talent.

Orphaned at birth, Oliver Twist is brought up in a workhouse, sold to an undertaker, and generally ill-treated. Hoping to escape his melancholy existence, Oliver flees to London. With each step of his journey, he travels deeper into a world populated by depraved villains, wicked pickpockets, and sinister opportunists. But there is a secret to Oliver's birth that promises to change everything.

A grim but vivid portrait of the Victorian era, Oliver Twist is the novel that gave voice to the world's forgotten and defenseless people.

The content of Oliver Twist is excellent, however, the quality of the voice recording is so difficult to understand that I felt I was continually deciphering a code to be able to follow the story line. It made the experience less than enjoyable.

I was very pleased with Flo Gibson's narration of this classic, but there's at least one gap of about 3 minutes in the action- unfortunately, it also happens to be one of the climaxes to the story! In case you want to listen to this recording anyway, and read the missing part, it's Chapter XLVII, "Fatal Consequences," and can be found on Project Gutenberg.

An expert and moving reading.

Spoiled by the narration.

I suppose it's my own fault for not listening to the sample before buying, but how on earth can you listen to Oliver Twist narrated by an American?