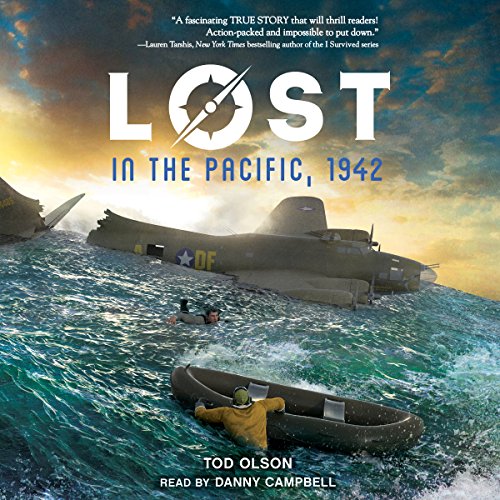 Lost in the Pacific, 1942 is the first book in a new narrative nonfiction series that tells the true story of a band of World War II soldiers who became stranded at sea and had to fight for survival.

World War II, October 1942: A plane carrying eight Americans crashes into the middle of the Pacific Ocean. With only four oranges and no fresh water between them, the crew has to band together and rely on each other for survival. What they think will be only a few hours or days before they are rescued turns into weeks lost at sea fighting off sharks, dehydration, hunger, and extreme heat.

Lost in the Pacific, 1942 vividly retells this incredible true story for a young audience and launches an exciting new narrative nonfiction series: Lost.

Cosa pensano gli ascoltatori di Lost in the Pacific, 1942: Not a Drop to Drink

Cool and fun and all some

a complete waste of time.
take 1 page and add an incredible amount of small details and there you go, this book.

I listened to it the first time on a long drive, nearly finishing it in on the way to the National Park we were headed to -- I was bummed I had to stop listening when we got there and was antsy all day to get back to the drive so I could finish :-) . It was really engaging and interesting and especially because it was historical. I've listened to it again since then, just while running errands and working, and then a third time with my kids on a long drive. My 7 year old son was initially annoyed I wasn't letting him listen to Harry Potter on the drive, but was soon transfixed, and my older two girls (9 and 11 years old) were intrigued from the beginning. It's one I've recommended repeatedly, and listened to multiple times. I plan on listening to it again in the future -- especially because it packs so much into a relatively short book, I can get through it in a day or so, and I've enjoyed relistening to it each time. I'm getting Tod Olson's second 'Lost' book, and am excited to hear there's a third on the way.

A look into the behaviour and survival of a impossible situation. Brave men doing what it takes to stay alive.