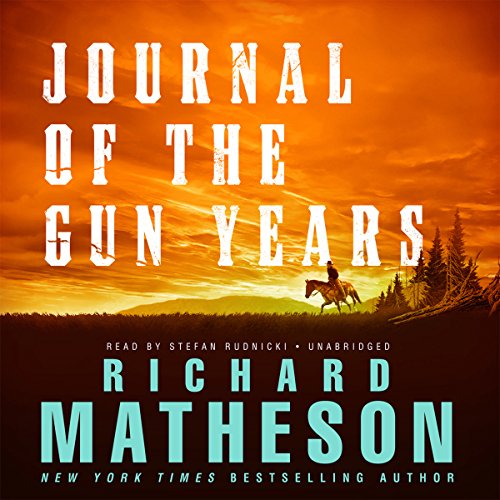 From New York Times best-selling author Richard Matheson, best known for his horror and fantasy writing, comes a highly praised Western that shows the master’s hand in this genre as well.

Back East, they told tall tales about Marshal Clay Halser, the fearless Civil War veteran who became known as the “Hero of the Plains” for his daring exploits in the Wild West. But the truth, as revealed in his private journals, is even more compelling.

A callow youth in search of excitement, Halser travels to the raucous cow towns of the frontier, where his steady nerve and ready trigger finger soon mark him as a gunfighter to be reckoned with. As both an outlaw and a lawman, he carves out a legendary career. But fame proves to be the one enemy he can never outdraw—and a curse that haunts him to the bitter end.

©1991 RXR, Inc. (P)2011 Blackstone Audio, Inc.
“The best novel I read last year.” (Stephen King)
“The author gives his story a credibility and honesty unusual in the genre.” ( Publishers Weekly)
“Breathtaking…first-rate…impossible to put down. Mr. Matheson has done something remarkable: with a single novel he has placed himself in the front rank of Western novelists.” (Richard S. Wheeler, author of Vengeance Valley)

Wasn't expecting too much but there is a bit of a lack of decent western novels devoted entirely to gunfighters and gunfights. this one intentionally cuts out most of the details that don't add to the construction of a gunfighter character and is a really enjoyable read. the narrator has some great moments and some moments where he is hard to take but on the whole I would enthusiastically recommend the book for straight up old west gunfighter story seekers.

Needs A New Performance Worthy Of A Great Writer

What is going on with the performance? After the first chapter the story is good, but it becomes unlistenable.The narrator takes on a weird robotic tone and an affected nasal deepness that quickly turns unbearably grating. I had to bail on this audiobook fast.