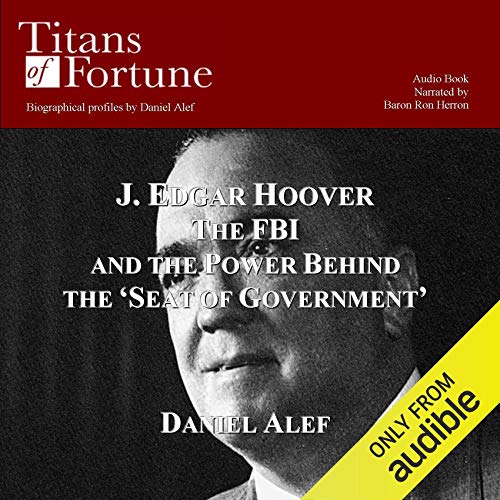 J. Edgar Hoover called the FBI the "Seat of Government", and in many way it was. He was one of the most powerful men in American history and while he was at the helm of the "Seat of Government", few dared to defy him. He was a law onto himself, the self-anointed protector of American security and virtues. Hoover's career with the FBI spanned 10 presidents, eight while he was the director. Trying to understand J. Edgar is like trying to solve a Rubic's cube with both hands tied behind the back. He was a master of organization, a world-class spinmeister, an astute manager who knew how to motivate, and how to scare the wits out of his subordinates - and often his superiors. Yet he built the most powerful, sophisticated, and least corruptible law enforcement institution on Earth. He was also vindictive, willing to use extrajudicial and unconstitutional methods to arrive at his objectives - the ends, for Hoover, unquestionably justified the means. Award-winning author Daniel Alef's biographical profile presents a three-dimensional view of Hoover, a fast and fascinating tale of an American icon.

Cosa pensano gli ascoltatori di J. Edgar Hoover: The FBI and the Power Behind the 'Seat of Government'

I would love to listen to this book but the narrator speaks so quickly that its impossible. He doesn't pause at all. It could be a great story but because of the speed its read at I will never know.