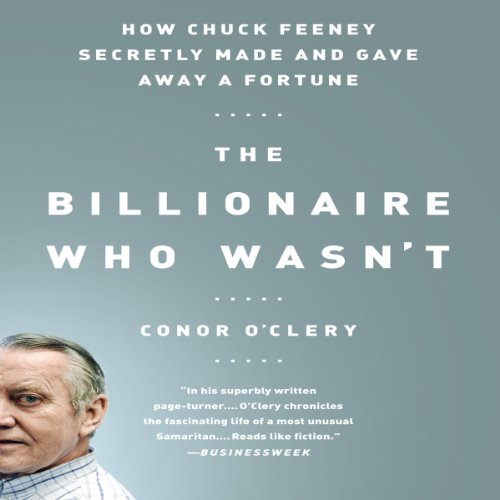 How Chuck Feeney Made and Gave Away a Fortune

In 1988 Forbes magazine hailed Chuck Feeney as the 23rd richest American alive. No one knew until then that he was extremely wealthy. Or was he?

Born during the Depression in Elizabeth, New Jersey, Feeney had made a fortune as co-founder of Duty Free Shoppers, the world's largest duty-free retail chain. How he did it is one of the great untold retail stories of modern times.

The greater untold story is that Feeney had in fact given away his fortune, in its totality, to endow Atlantic Philanthropies - one of the most generous and secretive philanthropic funds in the world. Atlantic Philanthropies is committed to giving away all its assets - currently they stand at $4 billion - during the next decade, an unprecedented example of the "giving while living" philosophy. Through the achievements of Atlantic Philanthropies, Chuck Feeney's influence has become even more impressive than his wealth.

Feeney is a frugal man who travels economy class and does not own a house or a car. He has largely kept out of the public eye - until now. He has revealed his secret life only because he hopes his story will encourage something in which he passionately believes: that rich individuals have a moral obligation to put their wealth to good use while they are alive.

Horizons I never knew were there!

Well written and spoken. New dreams awoken in me. I found the story engaging. The insight into this man's mind was inspiring. His zeal for making money as the scorecard of his effort and genius, then giving it away for his gratification and a personal measure of his significance - that is wonderful!

I don’t think the author had a full grasp of Chuck’s operations. Why was he literally obsessed about anonymity? What was he hiding? He clearly wasn’t paying taxes for the very least. He wasn’t even happy and satisfied. The first third of the book about his entrepreneurial endeavors was very interesting, culminating with the sale of DFS right before its decline to Bernard Arnault was brilliant. The rest of the book was nauseating due to his anonymity paranoia. Giving away to a good cause should be something joyful and fulfilling. At some point he was even at war with his own foundation. As Tony Robbins would say, success without fulfillment is the ultimate failure.

The story is very detailed but not so well written. There’s little emotion and no big teachings. If you’re a multimillionaire or billionaire you should give some of it to do good. That’s a nice message but what about the remaining 99.9%? There’s literally nothing in this book for us.

I feel this book has shed some important light on how we should all live.

Very Interesting.
Amazing story of Chuck Fenney. The book should be a must read to all Billionaires!!! Interesting for the personal side of the story but also for the account of how Dutty Free Shop become an amazing company

What an inspiring story! The most generous, unpretentious and kindest man on the planet. He altered the direction of Ireland through enormous third level education funding and helped bring peace to Northern Ireland. Funded hospitals in Vietnam and Australia, South African Universities and medical research centers in America and throughout the world. All given anonymously in the spirit of helping people, selflessly. Anyone who reads the Chuck Feeney story will be inspired to do more good in the world.

Was so sad when the book ended.

It was like I went on this whole life journey with this amazing person and then....it was over too quickly.

The most interesting man in the world

Feeney is amazing. The billionaire pledge that Bill Gates and Warren Buffet are doing is based on what Check Feeney has done. He did almost all of it anonymously. This is a great story that needs to be told and retold. What is really enjoyable is that you get an insight into his business and philanthropic strategy. If you want to know what a great fortune can do in the right hands, read this. Chuck Feeney’s impact will be felt a 100 years from now. But, few will know it was he. And that’s just how he would want it.

inspiring story, told in a clear and enticing way! "wealth doesn't change you, but merely exposes who you really are.."

You need to know about Chuck - The Anonymous Donor

This incredible human being has left a legacy that is simply incredible - you will be in awe of his life, his work & his lifelong giving to improve the world through philanthropy - Thank you Chuck for allowing this book to be written and from moving on from being the anonymous donor to the man who talked the talk and walked the walk - #givingwhileliving

Brilliant and so different, in my top 10

Brilliant and so different, in my top 10 books.
great story and life of a genius, but also sad to see money ruin relationships

Well worth a listen by anyone

On the face of it a story of a paradoxical man who grew up poor, enlisted, then university and travelled. He made millions from Duty Free and investments and then decided to give it all away to make other people's lives much better. It reads like a novel rather than a biographer and is fascinating. Has it changed by views? No but it has strengthened by determination in all parts oft life. Chuck Feeney achieved success at whatever he focussed on and [relatively] quickly. Great read and well narrated.
L

must listen, then listen again

Chuck represents the counter culture of today, in a world driven by money and greed he is an example that big business can help the greater good