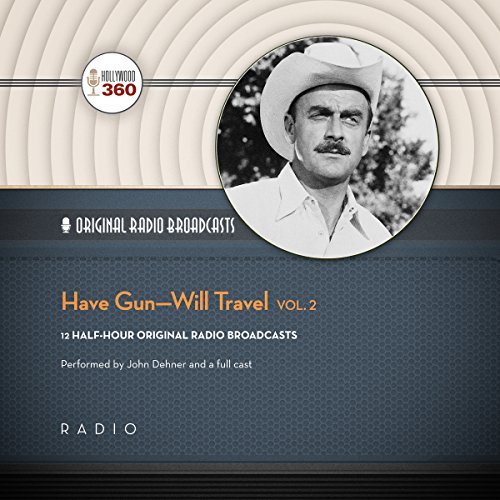 Have Gun - Will Travel follows the adventures of Paladin, a soldier of fortune turned hired gunfighter, played by John Dehner. Paladin prefers to settle problems without violence, yet when forced to fight, he excels.

It's 1875, and Paladin lives at the swanky Carlton Hotel in San Francisco, where he dresses in formal wear, eats gourmet food, attends the opera, has a Chinese valet named Hey Boy, and enjoys the company of beautiful women. When working as a gun for hire, he dresses entirely in black, uses calling cards, and wears a holster decorated with a chess knight emblem - a symbol that refers both to his name and to his occupation as a champion for hire.

One of radio's best-loved Westerns, Have Gun - Will Travel ran from 1958 until 1960 and was a successful offshoot of the highly rated television show. The 12 suspenseful episodes in this collection aired in 1959 and are: "The Return of Doctor Thackeray", "Winchester Quarantine", "The Monster of Moon Ridge", "Death of a Young Gunfighter", "The Five Books of Owen Deaver", "Maggie O'Banion", "The Gunsmith", "The Colonel and the Lady", "Gun-Shy", "In an Evil Time", "Blind Courage", and "Roped".