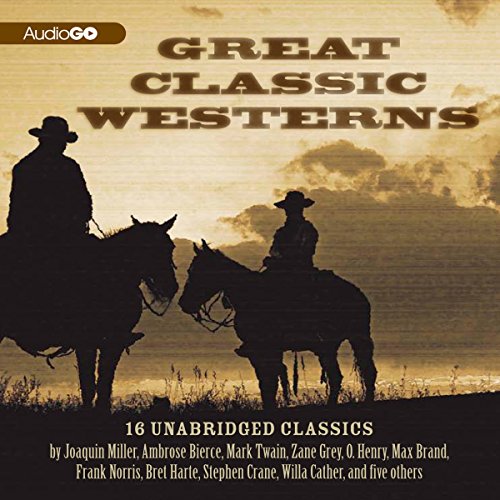 A collection of timeless Westerns from some of the most well-known authors of the genre, including Zane Grey and Max Brand: "The Little Gold Miners" by Joaquin Miller, "Bulger's Reputation" by Bret Harte, "The Leaf of Red Rose" by W.H.H. Murray, "The Secret of Macarger's Gulch" by Ambrose Bierce, "The Californian's Tale" by Mark Twain, "Twelve O'Clock" by Stephen Crane, "The Vengeance of Padre Arroyo" by Gerturde Atherton, "A Deal in Wheat" by Frank Norris, "The Caballero's Way" by O. Henry, "On the Divide" by Willa Cather, "Timberline" by Owen Wister, "The Passing of Black Eagle" by O. Henry, "Ananias Green" by B. M. Bower, "Lightening" by Zane Grey, "Pardon of Becky Day" by John Fox, and "The Laughter of Slim Malone" by Max Brand.

Great stories. The narrators were true to the spirit of the tales. I recommend it heartily for those needing old charms.

What made the experience of listening to Great Classic Westerns the most enjoyable?

What was one of the most memorable moments of Great Classic Westerns?

I like Zane Grey stories, they may have been written more than 100 years ago but are stil enjoyable

Some of the stories in this collection are good western tales, but only a few. Some others barely quality as western and others, in my opinion, don't qualify at all. Some are written in a style closer to Poe than to the great western authors like Grey or Lamour. Overall I would not recommend this collection to those expecting great WESTERNS.

The collection of short stories was well curated, an excellent blend of humor and excitement. Modern readers will have little trouble with outdated terms, etc. Bronson Pinchot is my new favorite narrator, perfect pace, great voices.