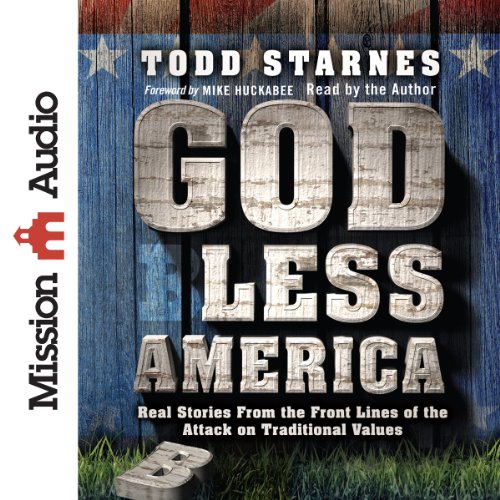 Pay attention, people of faith. Dark clouds are gathering. The winds of intolerance are blowing. There’s a great storm approaching. American Christians are facing uncertain times. Our nation’s values are under assault. Religious liberty has been undermined. We live in a day when right is now wrong and wrong is now right. The vicious left-wing attack against the recent traditional marriage stance of Chick-fil-A should serve as a wake-up call to people of faith. It’s not about a chicken sandwich. It’s about religious liberty. It’s about free speech. It’s about the future of our nation. As a reporter covering the culture war for FOX News, Todd Starnes is on the front lines of these attacks against traditional values.

In God Less America, he uses both recent news stories and compelling interviews with today’s top conservative leaders to bring to light what is happening across our country. In his award-winning, satire-meets-serious writing style, he strikes an important blow in today’s culture wars.

Eye opening book. Very interesting to see how times are changing. Time to stand up and stop the changers!

Todd Starnes has a way to make you laugh while learning serious facts about the Godlessness in America today.

Todd Starnes down-home, charming method of storytelling, coupled with his honest reporting of news somehow missed by mainstream media is a refreshing shift from the typical barrage of liberal bent. Some of the events he tells about are hard to hear and/or believe in this land of the free, but it is important to realize that many of these freedoms have gradually eroded as we have followed the pied pipers of political correctness. It is time to take notice, take a stand, and take it to God in prayer and repentance.
Thank you, Mr. Starnes for this dose of reality!

Persecution of Christians in the United States.

Amazing stories of atrocities commited against Christians and the LORD Himself here in our own country! Things that are true that you wouldn't otherwise have believed! You will laugh, you will cry, you will be edified, and motivated to stand up for your faith in the Lord Jesus!

This book is a must read

Love the whole book. I'd recommend this for anyone who has traditional Christian values and doesn't want to see a fundamental change to America's values in addition to being serious book about a serious subject, you will laugh your head off.

Where does God Less America rank among all the audiobooks you’ve listened to so far?

At the top of every list of every category. Todd Starnes provides a wake-up call to all U.S. Citizens and the changing United States we are now living.

Everything our fore-fathers fought for is now being turned-over. It's been a 25-30 year indoctrination of children in the public school system. The movement of political correctness is an indoctrination that will bring our 'free-thinking"' country down.

He is a fabulous story teller.

This is a compilation of what is happening throughout the USA that the spinless media will not report because they endorse the 'removal' of church from state, not just separation.

The kind of truth everyone needs to hear. Will buy copies for friends. Awesome Read!