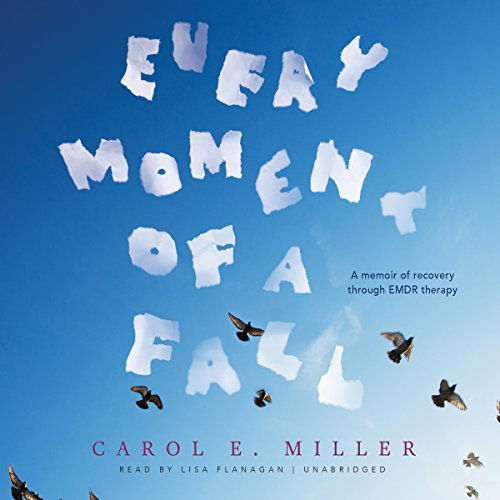 Every Moment of a Fall

Carol E. Miller was 16 when the private plane piloted by her father crashed, pinning her in the wreckage, critically injuring her parents, and killing her 12-year-old sister. Compounding this traumatic event, her father told her he wished she had died instead of her sister. For the next 20 years, she labored under feelings of guilt and a lack of self-worth.

When another in a long line of personal crises landed her in therapy with an EMDR (eye movement desensitization and reprocessing) practitioner, she began at last to investigate the crippling effects of the plane crash. Using bilateral stimulation to access her fiercely guarded memories, she learned to challenge the belief that the crash was all her fault and that she didn't deserve to be alive.

This is a brave and revealing memoir of recovery from tragedy and a fascinating, vividly narrated exploration of the increasingly popular eye-movement therapy developed to heal the wounds trauma leaves in its wake.

Cosa pensano gli ascoltatori di Every Moment of a Fall

Totally Mesmerizing and Much Better Than Fiction!

I knew it would keep my interest, as I have a degree in psychology, but I didn't think I'd hang onto every word of Carol's "life story" as she went through the process of sorting her life out. She has had extraordinary things happen to her, mostly things none of us would have wished for--from having multiple abusive parents to being in an airplane crash.

Carol's life was not going the way she felt it should and finally convinced herself to give therapy another chance. It was the most 'right' thing she ever did.

Listen to her story. It is amazing and fascinating. Every word of it! If you are at all like me, you will be mesmerized at how the therapy plays out, particularly as she is referred to an EMDR therapist. What is EMDR? Read this book and learn about how this almost magical yet highly regarded technique works.

Narrated by Lisa Flanagan--I had to keep reminding myself she wasn't the author. She was awesome!

I do a fair amount of audio books and found this to be in the top tier. The writing is poetic, the tone intimate, and the content describes an inner process we rarely get to view: our own, or that of others.' While the dramatic audio performance is excellent, my one complaint is that, especially in the early chapters, Flanagan takes long, unnecessary pauses between every single sentence, which I found quite tedious until I resigned to it. Otherwise, and all in all, her voice is pleasant and captivating and the memoir wonderful: an extremely useful and important addition to the genre.

It is hard to believe that anyone would have so much happen to them of this magnitude , let alone find healing.
Although I was not familiar with this form of therapy it opened my eyes so that I'd want to share with anyone needing deep healing. I believe Carol's therapist is gifted.
Carol's willingness to share her journey through painful truth is amazing . But to write her story of healing was a testament to her amazing capability as a writer
The women who did the audio was best I've heard and I heard al lot.
I will highly recommend the book and this form of therapy.

As someone who has had EMDR therapy for a much less traumatic situation, this was a fascinating story in its parallels. I have complemented my recovery with EMDR CD's, which is what I was searching Amazon for when I found this book. Like Carol, I have discovered that what you start therapy for is often the a symptom of a totally other event. Kudus to her and her therapist! I am not sure if this would appeal to a broad audience, but for me it was

I thoroughly enjoyed this story. I love wondered how this type of therapy works since the 1st time I saw it. As a person who suffers from PTSD & night terrors this gives me hope for a better future with treatment. I will be calling locally to see who offers it. It was truly enlightening.

I read this book because I was interested in learning more about EMDR. It was very brave of Carol to share her story with the world. I am not sure if I am sold on the process of EMDR but I am glad she found healing with it.

I think that it was worth the read and educational! I would recommend this book for those who like memoirs or just want to learn more about the experience of EMDR.

Great EMDR description from the client side

Actually makes me want to go back and shovel out some more of my own crap. Great example of how EMDR should work - on the client side.

She told her story beautifully. It didn’t read like a counseling session it was captivating and inspiring.

Thanks for sharing your amazing story. Really beautifully written — and so encouraging! A great listen.

A story about people, who children is supposed to trust and love, can let them down for their own pleasure and to blame.
Story well written with a happy ending.
Narration was a bit slow.

A wonderfully honest account of recovery from trauma through eye movement desensitisation and reprocessing (EMDR). Amazing, I couldn’t put it down. Beautifully read.