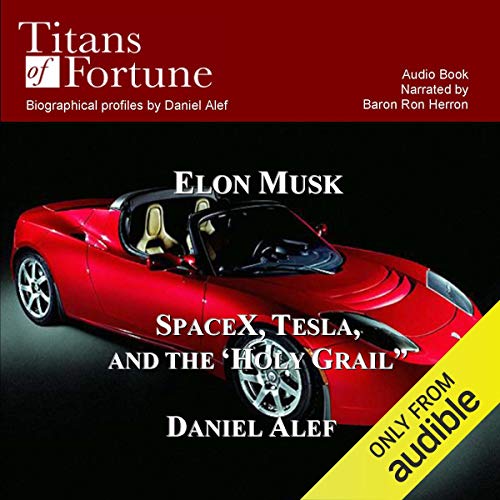 Elon Musk is the man behind PayPal, SpaceX, Tesla, and SolarCity, multi-billion dollar companies he founded. Although he is now a multi-billionaire, his objective has never been to amass great wealth, but to save humanity. Writing in the Smithsonian, Carl Hoffman noted: "He does not laugh or crack a smile when he says this. There is no hint of irony." Musk's remarkable success with SpaceX in aerospace and Tesla in automobiles, is all the more remarkable because those industries have been the bastion of the big boys, companies hardly embracing of newcomers. Many so-called experts predicted his doom, only to be surprised by his success; he has accomplished what no one expected, perhaps with the exception of the man himself.

Award-winning author Daniel Alef tells the story of Elon Musk, the real-world Tony Stark, aka Ironman, also called by some the Henry Ford of space and electric cars. This biographical profile includes the latest on Tesla, SpaceX, the gigafactory, and his personal life.

Could learn more from Google

The author has likely never met his subject to and the info is so general and uninsightful that it is frustrating. Just a waste of time.

Read it! Don't listen to it.

What disappointed you about Elon Musk?

The performance was awful. No one talks like that. There were no pauses for effect. It sounded like each sentence was recorder independently, then mashed together to make the recording as brief as possible.

What was most disappointing about Daniel Alef’s story?

I am interested in anything Elon Musk. There is nothing new in this essay. I was hoping that some insights through collaboration with Elon would have been shared.

Take a breath! It's not a race. You're telling a story, not selling something at auction.

With so much potential given the subject matter, I expected more.

Too much of a summary

This is no biography. It's a collection of news clips mixed with little online research.
Don't waste your time.

I'm interested in all things Elon, found some out some interesting things, but also found some of the info rushed and repeated elsewhere. Interesting listen though :)

Lots of gratifying information, but the performance of the narrator comes across a bit like a breathless newscast.