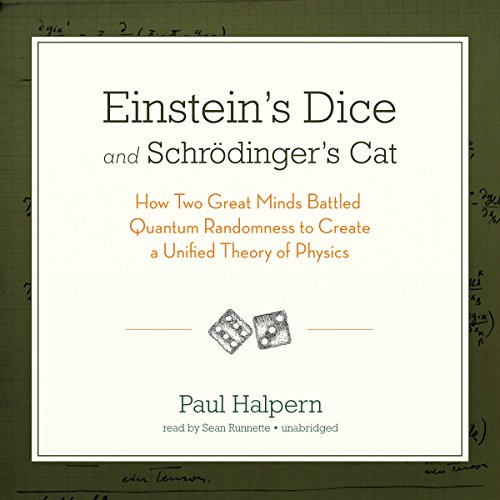 Albert Einstein and Erwin Schrödinger were friends and comrades-in-arms against what they considered the most preposterous aspects of quantum physics: its indeterminacy. Einstein famously quipped that God does not play dice with the universe, and Schrödinger is equally well known for his thought experiment about the cat in the box who ends up "spread out" in a probabilistic state, neither wholly alive nor wholly dead. Both of these famous images arose from these two men's dissatisfaction with quantum weirdness and with their assertion that underneath it all, there must be some essentially deterministic world. Even though it was Einstein's own theories that made quantum mechanics possible, both he and Schrödinger could not bear the idea that the universe was, at its most fundamental level, random.

As the Second World War raged, both men struggled to produce a theory that would describe in full the universe's ultimate design, first as collaborators, then as competitors. They both ultimately failed in their search for a grand unified theory - not only because quantum mechanics is true but because Einstein and Schrödinger were also missing a key component: of the four forces we recognize today (gravity, electromagnetism, the weak force, and the strong force), only gravity and electromagnetism were known at the time.

Despite their failures, much of modern physics remains focused on the search for a grand unified theory. As Halpern explains, the recent discovery of the Higgs boson makes the standard model - the closest thing we have to a unified theory - nearly complete. And while Einstein and Schrödinger tried and failed to explain everything in the cosmos through pure geometry, the development of string theory has, in its own quantum way, brought this idea back into vogue. As in so many things, even when he was wrong, Einstein couldn't help but be right.

This was probably the 2nd best book on physics I've listened to. Quantum by Manjit Kumar is still the best. Overall engaging story. Some complicated physics but more about the men, their ideas, and their mistakes.

I initially thought that I was about to be mired in just another historical retelling Einstein's march to wards unification. However I was greatly delighted to find much more detail about the series that both he and Schrodinger wrestled with throughout their lives. This is a very worthwhile read for anyone who is really serious about the fundamental elements of early physics.

Who would have known...

Stuff you would have never guessed about these almost mythical figures is talked about in this book and brings them crashing back down to human being status. They were just like us, flaws and all, so perhaps there is greatness in us all.

Great for a scientist

It was a good listen but you need to have at least a basic understanding of physics to get what is being explained. I learned a lot about both Einstein and Schrodinger and tried to follow the science but it was mostly beyond my reach. I would probably listen again and I might follow it better.

this is a great book. it perfectly blends history with science. it's completely devoid of any political slant and science funding issues. the book reads like a novel, one to be read many times.

1/2 Quantum Theory, 1/2 Fruitless Search for Theory of Everything

Half of the audiobook is devoted to the foundations of quantum theory up through EPR, then the other half is devoted to the two physicists' searches for a unified theory of everything, which goes nowhere, so while it's an interesting history, it's of limited use if trying to gain insight into quantum theory. The first half on quantum theory is well put together though and offers some useful explanations for relativity and the equations of quantum theory without going that much into the math. The relationships of the two physicists with their lovers are also a focus of the book.

Science at Its Best

This audiobook is spellbinding from beginning to end. It’s hard to imagine the amount of research required to produce. Maybe one has to possess a profound respect for the famous scientists noted in the book, or for the science in order to appreciate. Personally, I think that if I had not had a minor in Physics or had not taught Science at the secondary level, I would not be able to enjoy. There are many physics topics and personalities discussed that one may need to be familiar with prior to listening. However, I am on my 3rd listen while trying to absorb the story and the science. This book is well done and highly compelling for the lay scientists. Hats off again to the narrator Sean Runnette who has an amazing voice and storytelling ability. A year or less from now I will probably start on my 4th listen.

Nice overview to the fact that not all knowledge comes by itself and history and time are not negotiable.

I don't have the words to recommend highly enough how wonderful and well narrated this book is.

Lots of good background info on the formative years of QM & how Einstein & Schrodinger contributed.