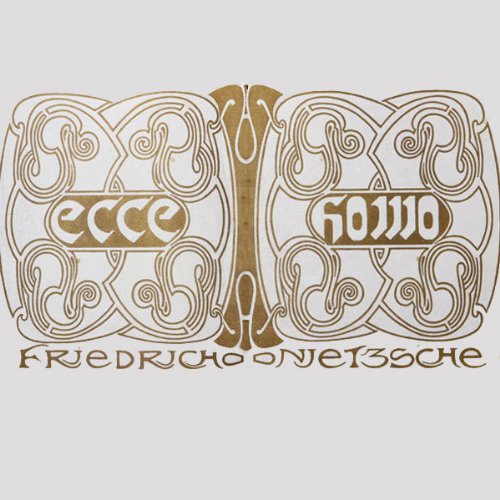 Ecce homo, "behold the man", are the words Friedrich Nietzsche chose as the title for his literary self-portrait. A main purpose of the book was to offer Nietzsche's own perspective on his work as a philosopher and human being.

Ecce Homo also forcefully repudiates those interpretations of his previous works purporting to find support there for imperialism, anti-Semitism, militarism, and Social Darwinism.

Nietzsche strives to present a new image of the philosopher and of himself as a philosopher. He expounds upon his life as a child, his tastes as an individual, and his vision for humanity. On these grounds, some consider Ecce Homo a literary work comparable in its artistry to Van Gogh's paintings.

I love listening to this book. The narrator manages to capture much of the nuance of Nietzsche's voice, including the sarcasm, chutzpah, and just all around joie de vivre.

being a friedrich nietzsche fan, i have to say this is a curious book. he's always got the hammer close when he's writing, but in this book all tricks of literary veneer are gone and he's fully bombastic, and without any trace of irony as he lays out chapter and verse why he is: clever, wise, a great writer, pure blooded, virtuous, etc. you could trot out a few of these gems without context, but the reader would find it hard to believe.

this book reads like a diary of self adulation. i find not a lot of "philosophy" happening here , although, of course, he's a rich writer and can pack an axiom into half a sentence - ie. "that which does not kill you, makes you stronger" - found herein.

unlike his other books, this one is vertiginously self referential. he's settleling scores with newspaper critics from 1870, and telling you why you'll care in 2010 - the balls on this guy!

Nietzsche is the 19th century philosophical bete noire, and he bashes his way through your head with more lacerating truth in a sentence than you'll find in a volume of his contemporaries. read twilight of the idols / how to philosophize with a hammer if you're new to Nietzsche. and read it again!

this book is interesting mostly as a (not flattering) window to his inner personality... interesting but bizarre.

This cannot be what Nietzsche sounded like! This chirpy reading captures none of the grit and anger of Nietzsche. I've tried to stick with it by pretending it's an underpaid graduate student reading N's notes, but it's painful. Will someone else please record this book?

It is interesting how this is also a summary of his own works, a commentary on Nietzsche by Nietzsche. It is not only a summary of the minute daily observations and habits he has worked out for his well being (despite incredible physical suffering), but how he is, in the face of suffering, nevertheless affirmative of life. However, far from focusing on the minutia of his life, he is actually founding the value of life on a revolutionary view of life as independent of classic morality which had dominated society in the form of Christianity (the dominant force of moralism at his time), and in the form of German Idealism (rationalism and moralism as reflected in the Kantian categorical imprerative). In place of historical and religious false valuation, Nietzsche advocates the spirit of Dionysus (versus Apolo), to live creatively, energetically and courageously in the spirit of Zarathustra, his magnus opus.

If you could sum up Ecce Homo in three words, what would they be?

My favorite "character" of the book is, quite obviously, the subject of the book, which is Nietzsche himself. He tells himself "the story of his life" as his own gift to himself on his 44th birthday (the preface written on 10/15/1888).

The literary figure which Ecce Homo's "Nietzsche" represents is the culmination of a process, the evolution of a man of destiny reflecting on his own long journey toward becoming what he was, and how a counter philosophy to pessimism, decay, and world negation found expression in his own life -- a philosophical faith he baptizes with the name of 'Dionysus'.

This "tragic perspective" that negates all other-worldly fantasies and which embraces *this* life in all of its joy, suffering, and mystery is summarized in his famous final section -- composed of just one statement -- "Have I been understood? Dionysus versus Christ."

What about Steven Van Doren’s performance did you like?

It's hard to know where to begin...

I'm a pretty hardcore Nietzsche enthusiast. I've listened (and re-listended) to everything Audible has in English by Nietzsche, and I literally LOVE everything about Steven's performance. He is, by far, my favorite reader of Nietzsche. I only wish he'd do Nietzsche's entire corpus -- Blackstone Audio, what do you say?

I've read Ecce Homo maybe a dozen times, while I've listened to Steven's performance of the work probably more than twice that. (His reading of Beyond Good and Evil is equally marvelous.) Steven captures all the nuances you might imagine an author as complex as Nietzsche might exhibit.

Steven's style has a cadence, exuberance, and power rarely encountered in other performances of Nietzsche, which always tend to be a bit too stiff and melancholic. We mustn't forget that Nietzsche was a passionate man who poured himself out into the books that he wrote. He extols, he chides, he baits, he exclaims, and he soars!

In a very telling passage wherein Nietzsche is recollecting on one of his earlier works, he compares his early style to his mature style and boldly claims that he's reached a height "where he no longer speaks with words but with thunderbolts," and adds, "oh, how far I was from all of that in those days!"

Steven's performance embodies this storm and current of Nietzsche's thought. You feel those thunderbolts in every sentence he speaks.

Keep in mind that Nietzsche wrote this work in 1888 as a personal, stylized, autobiographical testament that he intended to offer to the world so that there would be no confusion about who he was and the sense of purpose and destiny he that he believed he embodied as he moved forward with his project of correcting mankind's missteps and setting him on the ascending path, a project he called The Revaluation of All Values.

It's difficult to overestimate this aspect of Nietzsche's final works, that no matter how awesome his writings of 1888 are, what he believed to be his true revolutionary works were still on their way!

In fact, Nietzsche felt his sense of responsibility for all the ages to come to be so great that he writes Ecce Homo as a kind of preparatory introduction to the man who would "split the history of mankind into two halves," just as his Antichrist was his first installment of his intended Revaluation and his Twilight of the Idols was a free-spirited synopsis of his mature perspectives.

So remember this when listening to Ecce Homo: this was a piece of groundwork upon which the Revaluation was to be understood; it was only a beginning.

But, of course, his fate would be radically different from how he himself envisioned his own future -- as "a calm sea with no ripple of longing" -- because his mental breakdown and collapse into insanity a few short weeks later put an end to his plans for a Revaluation of all Values that he intended to present to the world. And that's the great tragedy: we'll never know what his genius had in store.

What made the experience of listening to Ecce Homo the most enjoyable?

Nietzsche is the best, and his autobiography is a great experience if you're interested in the man. It gives an account of his life that seems honest, and equally mysterious. Full of good advice that you think the man doesn't really live by. Typical Nietzsche. The book is worth it for the chapter titles alone. "Why I Am So Wise." "Why I Am So Clever." The man nailed it.

What about Steven Van Doren’s performance did you like?

Listen, this guy sounded like George Takei. I felt like Nietzsche was being read from the bridge of the Starship Enterprise. It was much to pompous and self aggrandizing, and I understand why someone might THINK this is the way to do it. But that someone was wrong.

Sure, if I had that long to sit. Who could sit that long?

how Friedrich Nietzsche became who he was

an excellent summation of the philosophy and life written by the man himself.

the sound can become a little stressed and needed to be recorded with a better microphone.

One of the easiest Nietzsches books to understand

This book explains well the other books, which is a good start if you ever wanted to dwell into his other works. The ideas like in all his other books are all over the place. Every new sentence of his is filled with a complete new idea that I couldn't fully comprehend unless I read an analyzes from other sources, which disrupts the flow of the book. This is not an easy book to digest. It requires your full attention to details. I had to relisten certain chapters again and again till I fully grasped the idea and when you do actually grasp it - you feel devastated. His ideas are quite nihilistic to the point where it is unbearable. So if you think you are a negative prick try on this beast. Good luck keeping your 'God' after this one.

Watched a Turkish lad buy this from a market stall

....and thought to myself I really should give this one a go. Although it purports to be a late summary and justification for all of his earlier work, the autobiographical elements in terms of the day to day narrative of his life seem at times to take precedence.

It is not so bad for all of that, however. He is laudatory of Richard Wagner but even this giant of European art and culture seems to play a very muted second fiddle to Nietzsche’s fine opinion of himself. And that’s what principally comes through - most pointedly in the chapter titles - “Why I write such brilliant books,” “How do I manage to stop thinking about the ordinary things in life, in the face of such indifference and intolerance from my family and the local community and get on with being such a beacon of brilliant thought.” Along the way there’s “Isn’t Turin a nice place to live,” and “Aren’t the Germans a bunch of hypocrites and philistines.”

All told, it is good to get down to the original manuscripts and read the text behind the title - a good exercise, but not especially rewarding since so much of this is derivative of the earlier words and this is, in total work at an apologist stage of the cycle.