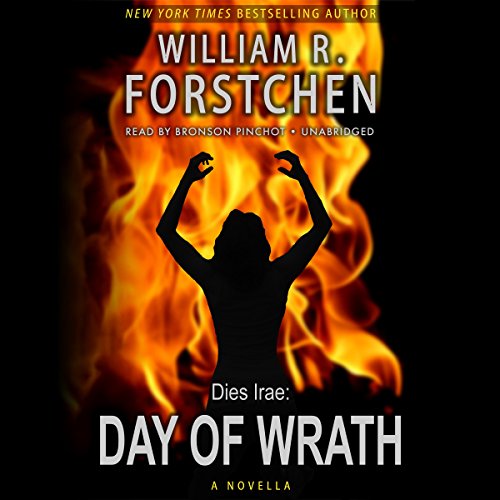 This novella by NewYork Times bestselling author William R. Forstchen imagines a horrifying scenario where, in the course of one day, the terrorist group ISIS carries out massacres in schools and on highways across the United States. With a surprisingly small but well-organized and ruthless force, the nightmarish devastation brings America to a state of near paralysis.

Bob Petersen arrives with his daughter at the middle school in Maine where he teaches, expecting another regular day but worried about what recent ominous news reports might portend. Suddenly his school - along with many others across the United States - is under attack. Gunmen burst in, slaughtering children and adults alike.

From the ISIS leader in Syria to the murderous rampages throughout the States, Day of Wrath reveals with chilling effect how national panic and paralyzing terror can bring a mighty country to a near standstill. Petersen's fight to save lives and stop the merciless gunmen provides edge-of-your-seat drama. This provocative work should stimulate an intense national debate.

WARNING...NOT FOR THE WEAK OF HEART

I listen to mostly true crime, and fascinated by what motivates unexplained acts of violence and behavior to the like. However, this book is one of the most disturbing and incomprehensible that I've listened to. It's written as "fiction", but it should be classified as a "non-fiction and in the "prep non-fiction " if ever that was a classification . It's the absolute real life worse case scenario that anyone could possible comprehend . I don't know what could be worse. I don't know if I loved it or hated it and when I said to husband "I can't listen anymore and tried to turn it off, I could not stop listening ". Absolute train wreck. Listen at your own risk.

Should be required listening.

If you listen to this and get it that is good. If you listen to it and just consider it fiction that could never happen you know nothing of the true history of the world.

William R, Forstchen wrote "One Second After," one of my favorite "awareness" books... it strongly affected me and many others. The cover and title of "Day of Wrath" kinda turned me off and I really didn't want to spend a credit for a 4 hour book... but I bought it anyway. I read it a week ago and needed that long to be able to write about it... didn't sleep well the night after I read it... and still pondering it.
It is timely, believable, horrifying and I want to send a copy to not just mine, but every senator and congressman. Forstchen said he didn't want to write it, that it was the hardest thing he has ever been challenged to write... but he felt obligated to open our eyes to the risks we face from foreign terrorists.
Not an entertaining read, rather a difficult "awareness" read. Oh my goodness...

If you enjoyed "One Second After" this is another one to add to your list to read! Scary as hell to think both of these scenarios could happen. An eye opener to what could happen in the future.
William Forstchen has me captivated reading his books, thank you for the great writings!!!

This has always been a worry of mine. This story captured precisely what worried me. At first I stopped listening. I couldn't take it. After a few days I picked it back up. It should be a must read for all parents.

Frighteningly Realistic, Where America is . . .

As attacks begin in America's schools simultaneously across the nation, like an well orchestrated dance, Bob Peterson, a middle school teacher arrives at the school where he teaches and his daughter, Wendy attends . . . soon afterward, the assailants begin their murderous assault on their school . . . like sheep to the slaughter, administrators and teachers begin herding children together, following their mindless terrorist training instructions in their "gun free" zone, giving the shooters mass targets . . . keeping all children locked inside the school . . . all but one teacher . . . who has dared to defy political correctness, dared to THINK, dared to push his own daughter out of a window and scream "RUN!" . . . Every single American, regardless of political party or affiliation needs to listen to Day of Wrath . . . ISIS is here . . . in America . . . Evil is real . . . and escalating . . . and if you believe for one second that Islam is a religion of peace, you really need to get your head examined . . .

I liked the story, didn't like the overt politics

If the politics were written out of this, I'd have given it 5 stars.

I've enjoyed several of this author's books, and even though I know he and I may not see eye to eye on politics, I've always been able to suspend my own opinions and enjoy the story. I'm a rare breed here in the south; I am aware something big may happen and we need to be ready, but I'm not right-wing in my thinking. That said, I'm also not one to shut out others' viewpoints.

Where this book got me was when he repeated, multiple times, that it's people's "fear of being seen as racist" that will cause us to allow ISIS to kill our children, etc., etc. I am horrified by the fact that this author, who loves to assure people that he's the expert on all things political because he's a historian, outright urges his readers to embrace racism against certain groups. Some may hear and see this rhetoric all the time and pass it by; I'm becoming increasingly aware that words have much more power than we used to think.

Another note was when he made the side comment of how the teacher thought, since guns weren't allowed in school, that kids were expected to just hide and wait and pray - and then hurried to make a commentary about how it was a public school and so kids weren't allowed to pray. That has irked me forever, and to hear someone who claims to be so smart spouting the same simplistic, bumper-sticker nonsense is beyond ridiculous. I won't make the argument here, but a thinking person knows it's pandering to a certain intellectual level.

Third, the prologue was filled with all sorts of commentary about how he "didn't want" to write the book, but that recent events had forced him to write it as a warning to us so his readers could be prepared for what he "knows" is going to happen. His character wins the day by breaking school rules and illegally carrying a gun to school. His character is, of course, a white Christian man with a white Christian family and lots of traditional "family values," including breaking the law about carrying guns to school, simply because he thinks he knows better.

Couching this fiction story as a missive from "the" expert on history (and therefore the only person who really knows what's coming) is dangerous. This is likely to get someone murdered. I had hesitated to get this book, but gave it a chance anyway. I'm so disappointed in the author's decision to take a perfectly good fiction story and try to make it racist propaganda and prophecy.

***NEEDS TO BE READ BY EVERY AMERICAN!!!

This book depicts the horrors of every American's worst nightmare... Although disturbing, it is a warning bell to all who have forgotten our vulnerable state!! For the sake of your family, please read this book and heed it's warning...

Devise a plan with your loved ones and prepare your heart for the attack that has been promised by ISIS for years! Thank you William Forstchen for mustering up the heart to write about the realities we are so deaf and blind to! You are a hero in your own right!!!

Be Thankful This Book Is Short

This audiobook was hard to listen to. The narrator, sound quality, writing and plot were all superb, however, this is a relentlessly dark, morbid and plausible story. The satanic death cult of islam is described for what it is by this book, but that's only half of the message. The other half is the outright impotent cowards we have controlling every branch of our government, media and academics. The United States has created the best enemies money can buy while its citizens are lied to and distracted by politicians and the media conglomerates, and their rights are systematically removed by far leftist judges. This is widely understood but rarely delivered in such a persuasive manner as with this book.

If you have small children then you might want to think twice before listening. I'm not saying to bypass this book, just perhaps buying the actual book and reading it may be better. I imagine you would be able to pull away, or cautiously proceed at your own pace versus having the narrator thrust you forward, masterfully but without remorse, like being on a roller coaster from hell. This story builds a tempo quickly and doesn't let up until the very last word. It is brutal, heart wrenching, terrifying and realistic. It's made all the more so because you can actually imagine this story happening.

Ironically there's lots to say about this relatively short audiobook. I applaud the author for having the courage to write it. Yes, courage. It seems rare to find anyone who will honestly represent islam for what it is. If that offends you then ask why there aren't any islamic leaders that will speak out against the terrorist within its faith. Oh, I forgot, islam is a religion of peace.

Unnerving how simplistic this potential horrifying scenario really is for those who want to see the collapse of the U.S.

A timely warning of what some say is inevitable !

This is a frightening and truly disturbing description of, what could very well be, a future forecast that can easily happen anywhere in western society. That is if we do not wake up to what is actually going on right now world wide.

Every gruesome event described in this harrowing, but complusive and impossible to put down, novel has already happened somewhere in the world in the past ten years.

The reason we tend to ignore, yes ignore and turn away from these horrors is that very rarely does it happen in our own back yard !

We have become so used to seeing death and destruction over the past 30 years, due to faster news reporting plus more uncensored violent imagery, in movies as well as on tv and more importantly the internet.

The boundaries between truth and fiction, for some, has become so blurred that when we hear about the latest atrocities, on the news for example, we seem to be so desensitised we can forget (ignore), what we have seen and go about our daily lives within minutes.

It takes an event such as 911 to wake up a large proportion of the population to the difference between truth and fiction.

If you, like I, have actually witnessed, in real life, what we see reported on the news it becomes indelibly printed in your mind and can not be ignored, ever again.

I can not recommend this book highly enough. The Audible version is an excellent companion, the narrator is to be congratulated as well as the author, as I found it to be one of the best audible narrations I have ever listened to.

This should be essential reading to all western politicians and the bleeding heart brigade, especially those, who try to justify any of the appalling acts carried out by terrorist groups like Isis and all who follow this evil and twisted ideology.

Truly horrifying and yet amazingly well written. A story but with everything taken from real life, you could see this happening.
This should be on every free thinking persons reading list.