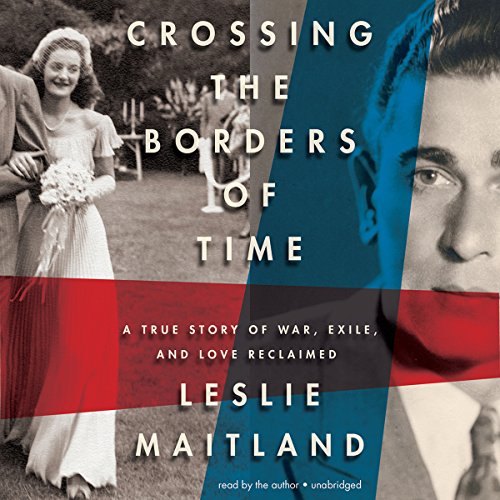 Leslie Maitland is an award-winning former New York Times investigative reporter whose mother and grandparents fled Germany in 1938 for France, where, as Jews, they spent four years as refugees—the last two under risk of Nazi deportation. In 1942 they made it onto the last boat to escape France before the Germans sealed the harbors. Then, barred from entering the United States, they lived in Cuba for almost two years before immigrating to New York.

This sweeping account of one family’s escape from the turmoil of war-torn Europe hangs upon the intimate and deeply personal story of the passionate romance between Maitland’s mother and a Catholic Frenchman. Separated by war and her family’s disapproval, the young lovers—Janine and Roland—lose each other for 50 years. It is a testimony to both Maitland’s investigative skills and her devotion to her mother that she successfully traced the lost Roland and was able to reunite him with Janine. Unlike so many stories of love during wartime, their's has a happy ending.

I didn't want it to end..absolutely wonderful!

What made the experience of listening to Crossing the Borders of Time the most enjoyable?

The author was also the narrator and she did an outstanding job. The story itself was incredible..a young Jewsih woman escapes France at the last moment before the final deportations. She leaves behind her fiancee and they vow to reunite after the war. The book covers her escape to several different countries and spans the next 50 years of her life. The author has so much love and feeling for all of the characters which makes this an extra special experience. I highly recommend this book!

What was one of the most memorable moments of Crossing the Borders of Time?

There are too many to count.

What does Leslie Maitland bring to the story that you wouldn’t experience if you just read the book?

She is the daughter of the main character and mother and daughter have always had an extremely close relationship. They know more about each other than an author outside the family could ever find out. You can hear this in her voice. She also can speak French and some German which really adds to the reading.

Be prepared to fall in love with these characters!

I'll be honest. I have a horrible time with books written about the Holocaust. It's just so awful to contemplate and it haunts me for days after the book is over. I was afraid of starting this book for that very reason. Knowing it had been written by a daughter was reassuring that there were survivors.

From the start, the author's training as a journalist is evident. The extraordinary level of research is obvious. She approaches the emotional aspects of the story intellectually as well. Where certain behaviors might have been reprehensible in another book, she really adds to the understanding of motivation.

I would hope that if I ever wrote a book about my family's history, I could do it with such care. Beautifully done. Great book club book.

I live in Czech republic.Many Jewish from our city were send to Nazi camps.special stones to remember these peaple are in our city.too.my grandfather died in Nazi camp too

Would you consider the audio edition of Crossing the Borders of Time to be better than the print version?

Yes and no. Reading it in print would have been more challening with the French and German language, and having the author narrate the book did add a few things to it... but I think the book stands on its own either way

I liked the historical and biographical connections. it was very well done

Yes. The story is meant to be savored, not devoured, and Leslie Maitland's narration does succeed to that end

As another reviewer put it, Blackstone could and should have done a better job toward the end of the book of editing out the re-takes. There are several repeats of the same few sentences.

Also, I have to say that I do not agree with the author's final conclusions regarding the love story in this book. She does do a good job of detailing the complex emotions of her parents' lives and marriages, balancing her love for her father with her anger at his faults; I wish she had done the same with the relationship between Janine and her long-lost love.

I could not put this down!

This book added a personal account to the dry facts about the holocaust that I had learned from the past. I heartily recommend it to anyone!

If you saw this in a movie you'd say it was an impossible plot and that it could never happen in real life. The story of Leslie Matiland's mother and extended family escaping Europe in WWII is fascinating. The telling requires honesty about family members and choices that had to be made. Because she's a journalist, she puts together research and story telling and the result is riveting.

the narrator was very good and I'm glad she chose to read her own book, making the story that much more real and appealing.

Blackstone Audio needs to take another editing pass through this book. Many, many times a sentence was repeated, especially towards the end - where an interruption, however slight, is unwelcome.

More than a love story

Maitland has clearly done a great deal of serious research in putting together this story, which is personal but also historically relevant for today's world. The author's facility with English, French and German help to bring reported conversations to life and make each character distinct. Maitland adeptly handles the many entangled, complex events in recounting her own family's history in war-torn Europe, tying each individual's action and reaction to exact times and places so that there is no doubt about what is happening, why, and to whom - which can be the case in stories from less skilled journalists or writers. "Crossing..", though, is not easy listening. It can seem that the abundance of detail gets in the way of what appears to be the central love story. For this reader, it took listening in segments, followed by reflection and deliberation, to understand that Leslie Maitland did not only write a story about the endurance of love between two individuals. She captured the sense of how many of us came to be who we are today as a result of the unbearable struggles and incredible persistence of previous generations who decided to survive and, to the best of their ability and circumstances, refashion their lives.

if you want to flesh out the real life experiences that are just factually reported this book does that
it brings to life the terrible plight that overtook European Jews as a result of the Natizies . The effects of being torn from your work, life and home and set on a train to your death or an unknown journey for the rest of your life. the author takes a long time to reunite the lovers torn apart by war. most of the book traces one families escape and their assimilation into French, than Cuban and finaly the US culture
In the end the long lost lovers do connect as much as life current situation allows. The books grows on you as you read on.

Everything about this book is excellent--the narration by the author is perfect. Still, I am going to buy a print copy of this book so I can better enjoy the rich descriptions and excellent writing.