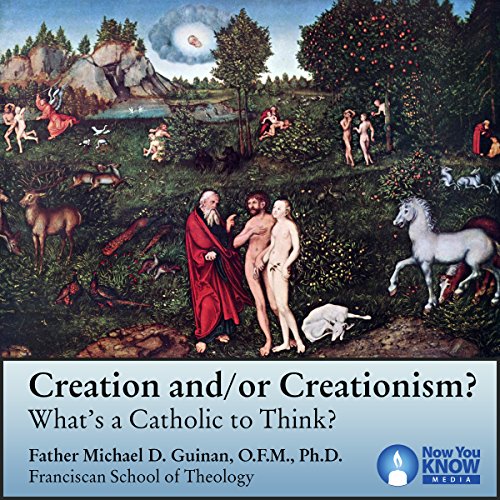 God declared creation good. But the debate raging about creation in recent decades has been anything but.

If you have ever gotten lost in the storm of controversy surrounding the creationism debate, then Fr. Michael Guinan's grounding instruction is your key to understanding.

Do you believe in evolution or creation? Is man created in the image of God or the image of an ape? Should "creation science" be taught in public school science classes? These are controversial issues in America today. They grab headlines and stir up emotions, but often little progress is made in conveying key information.

The controversy, evolution vs. creation, is actually part of a much larger conflict - one may even call it a culture war - but it becomes clear rather quickly that a key role is played throughout by a particular understanding of the Bible (popularly called "fundamentalist") and what it teaches. Is evolution actually in competition with Genesis?

In this course you will see that the science vs. religion struggle on this issue is ultimately a false one. Other ways express more adequately the relationship between these two important and interrelated areas. After setting out some initial perspectives and surveying briefly three challenges from the past (Galileo, the rise of modern geology and the age of the earth, and biology and evolution as represented by Charles Darwin), we will survey the evolution vs. creation controversy as it has been played out in the United States in the 20th century.

This course provides the Catholic perspective of this heated topic, an essential resource in the 21st-century world that is flooded with inaccurate media. You will find Fr. Guinan's teaching excellent and the information priceless.

This audiobook is a well thought out rebuttal to the “Christian” (fundamentalist) propaganda in the US that faith and science are somehow in opposition to each other. Well worth a listen.

I'm catholic and I'm embarrassed by Fr. Guinan discussion of creation. I have studied the Genesis chapter one and can find no problem with the narrative. The Hebrew language is precise. There are terrible problems with geology and the current science for measuring age. One example is the flood. There is real evidence that there was a global flood. The geologic column shows that sedentary material covers the earth just about every where. In the US west show great deposits of sedentary rock. that could only occur from a great flood. You cannot use radioactive dating for any measuring other than biological material. 6,000 to 10,000 years at the most. The theory of evolution really has serious problems. Examples include no remains of any fossils of animals that are supposed to show the changes from the first of an animal to its final animal. be the interim.

Fr. Guinan is trying to use flawed science to discredit the beginning as described in Genesis. If he was more of an orator the text would have least been a good read. .