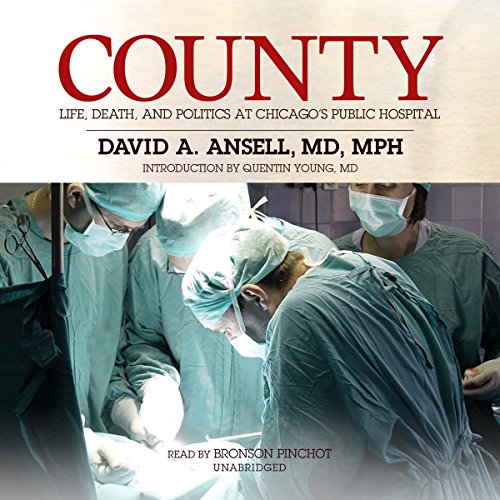 The amazing tale of County is the story of one of America's oldest and most unusual urban hospitals. From it's inception as a "Poor House" dispensing free medical care to indigents, Chicago's Cook County Hospital has been both a renowned teaching hospital and the healthcare provider of last resort for the city's uninsured. County covers more than thirty years of its history, beginning in the late 1970s when the author began his internship, to the "Final Rounds" when the enormous iconic Victorian hospital building was replaced and hundreds of former trainees gathered to bid it an emotional farewell.

Ansell writes of the hundreds of doctors who went through the rigorous training process with him, sharing his vision of saving the world and of resurrecting a hospital on the verge of closing. County is about people, from Ansell’s mentors, including the legendary Quentin Young, to the multitude of patients whom he and County’s medical staff labored to diagnose and heal. It is a story about politics, from contentious union strikes to battles against “patient dumping”, and public health, depicting the AIDS crisis and the opening of County’s HIV/AIDS clinic, the first in the city.

Finally, it is about a young man’s medical education in urban America, a coming-of-age story set against a backdrop of race, segregation and poverty.

David A. Ansell, MD., a Chicago-based physician and health activist, has been an internal-medicine physician since training at Cook County Hospital in the late 1970s, where he spent seventeen years. Now chief medical officer at Rush University Medical Center, he sees patients, teaches, volunteers as a doctor at a Chicago free clinic, and participates in medical missions to the Dominican Republic and Haiti.

©2011 David Ansell; Introduction 2011 by Quentin Young (P)2011 Blackstone Audio, Inc.
Medico Medicina e industria sanitaria Stati Uniti
Mostra di più Mostra meno
“When it comes to the stories of his patients, many of whom he cared for over decades, from clinic to hospital to funeral, Dr. Ansell soars…We cannot have too many of these stories in circulation, to bear witness, to inform and to inspire.” ( New York Times)

I was in nursing school a little before the dates in the book. I attended City #2 Hospital in St. Louis, Mo. Homer G. Phillips. His account of Cook County Hospital is very accurate of the time. I saw many of the same things. Politics were the same all over the country, I could not get into the schools in Michigan where I lived. I am African American, we were not admitted to the schools there. After graduation I worked at the City Hospital in Detroit. Private hospitals did not accept minorities unless they could produce an insurance card. The rooms in the hospitals were then segregated.

He is right on target.Listening was a flash back for me.

The individual stories of life and death are interesting, but the book is really about the politics of publicly-funded health care. Most discouraging: the book spans decades and basic problems persist. On the other hand, lots of room for hope: dedicated docs and some examples of top-notch medical care. Insightful and a good example of how the personal becomes political.

Firstly, the narrator, Bronson Pinchot, brings Dr. Ansell’s words to life. For me, a healthcare worker, so much of what I see and feel about the quality and quantity of patient care inpatient and outpatient is reflected in this book. It saddens and infuriated me that we are still fighting for basic healthcare for ALL people. Dr. Ansell has written a powerful and articulate account of his experiences and documented the the disparities in healthcare between minorities, poor, and uninsured vs the white, middle-upperclass, and insured. I am inspired to keep fighting for my patients.

As a physician, I usually really enjoy books that take me back to my early days as a med student and resident in the inner city. This could have been a great book if it hadn’t been so colored by the author’s political views. Sadly, all the liberal virtue-signaling ruined this book for me and I couldn’t bring myself to finish it. In my view, the author egregiously oversimplifies a very complex problem, which leads me to believe that he doesn’t actually have a firm grasp on the many factors contributing to issues with access to quality healthcare in indigent populations.

Being a denizen of Chicago who now lives on the south side and having been a student at the Fantus outpatient clinic, I really connected with this story. It’s part autobiography, part clinical, part love story and part political activist novel. It’s a great read if you want to learn an important piece of Chicago’s history as well as a piece of the history of our national healthcare system.

I hope to see an addendum to the book.

I almost stopped listening to this book several times because of all of the political jabs taken at the Republican party. I realize that politics plays a huge part of a public county hospital system (I work closely with a system similar to Cook Co.'s), however, the author had too much in the way of politics and not enough in the history of the medicine.

Dr. Ansell hits it hard, and out of the park! Just this one book will prove why we have systemic racism and why we need single payer healthcare!

Dr Ansell's Message as Relevant Now as When Written

Initially was hesitant to endure the gloomy accounting of medical care
injustice described in author's era doctoring in Chicago's inner city. But I wanted hear his personal crusade as a "liberal" fighting for medical care justice (or alleviating injustices). Long, drawn-out and wearisome struggles are detailed by crusading author.But at the end what he shares is light on inner city medical disparities and cultural factors exacerbating health disparities. A key take away: what ever delays seeking or receiving helpful medical treatment will boost disparities and mortalities. For that there is no "magic pill".
Personally, as a retired M.D., hats off to author. He deserves a Congressional Medal. This book is not for entertainment. Dr Amsell bears open his soul. Be prepared to hear him out.

So true in more than one area

... The stories of all the problems with a Chicago hospital over the decades are unfortunately true in many places, many institutions.
The author feels, as many of us do, that there should be some way to have everyone receive the medical care they need. There is only one problem, and it is the same in every country: money. Technology costs money, and will keep on costing more as time advances. Agreed, everyone should get what they need... but also, there are plenty of people who do nothing for themselves. There is no good answer for that question, as we hear about the socialized countries having financial problems also.
Narrator, Mr Pinchot, is a favorite of mine... from other sites- but PLEASE get the lingo correct! To remove infected tissue from an area is to debride= de-BREED, not de-BRIDE. I know it appears to sound like a female wedding participant, but it’s not spelled the way it sounds.
I’m happy I listened to this book!

What made the experience of listening to County the most enjoyable?

The anecdotes from former patients, who shared their stories of bureaucratic indifference to their suffering. Dr. Ansell never overstates his argument and never plays with the reader's emotions.

Would you recommend County to your friends? Why or why not?

Yes. I would recommend the book to my friends who work, as I do, in government and public affairs. It is a lesson in active listening and responding to unmet needs.

Which character – as performed by Bronson Pinchot – was your favorite?

No. Bronson Pinchot's delivery of the material was a bit off-putting. I would rather have listened to this book as narrated by its author.