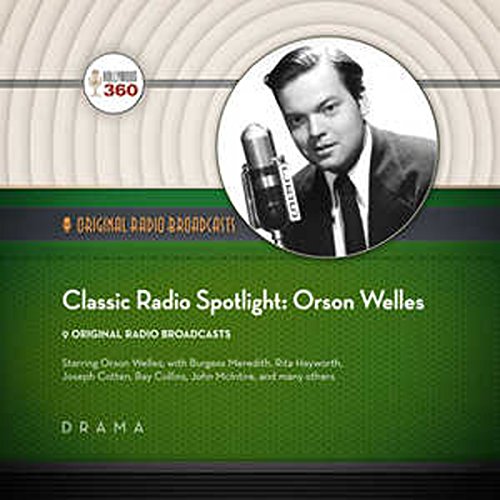 This collection spotlights the iconic Orson Welles in nine of his works from the golden age of radio. These radio dramas, airing from 1938 through 1951, are among his very best and can be enjoyed for years to come.

Armed with the nickname the "Boy Genius", Orson Welles graduated from the New York stage to expand his creative talents in the radio industry, hoping to use the audio medium to promote his stage ventures. Welles followed the practice followed by most stage actors: He played roles in hundreds of radio dramas produced by advertising agencies and the radio networks.

After creating a minor panic among radio listeners with his 1938 War of the Worlds broadcast, Welles attracted the attention of a movie studio that offered the actor the spotlights of Tinseltown - resulting in Citizen Kane. Making the move to California, Welles continued to appear on radio programs, became established as a Hollywood actor, and made numerous guest appearances on variety, comedy, and dramatic programs. In 1941 and again in 1946, he starred in a chilling story titled The Hitch-Hiker, scripted by Lucille Fletcher, which 13 years later was adapted into a television episode of The Twilight Zone.

In the early 1950s, when Welles was temporarily blacklisted, he moved to England and narrated the radio program The Black Museum and starred in The Lives of Harry Lime, a prequel to the classic The Third Man, now regarded as one of the 100 best movies ever made.